MRUC has also sent legal notice to a leading consultancy for violating copyrights and using the IRS data without subscription. 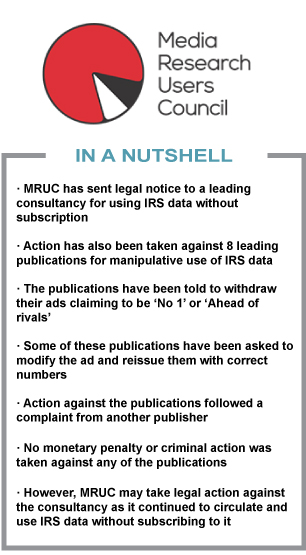 In a first-of-its-kind move, the Media Research Users Council (MRUC) has sent legal notice to a leading consultancy for violating copyrights and using IRS data without subscription. Also, eight leading publishers, against whom complaints of using misleading data for publicity were filed, were asked to withdraw their ads or modify the content. The action was taken after a committee, under the council, found the publications guilty of violating the norms.

The council got into action after formal complaints were submitted by another publisher, highlighting the ‘manipulative use of data’ by the said eight publishers.

Within days of the IRS data being released, most media houses had come out with advertisements citing IRS numbers to prove that they were ‘Number 1’ or ‘Ahead of the rivals’ in some or the other way.

“The data in all the 8 cases was found to be misleading. They had used the main data with variants to make misleading combinations. The erring publishers were asked to immediately remove the ads. In some cases, they were asked to modify the ad and reissue them with correct numbers,” said a senior industry person.

Ashish Bhasin, MRUC Chairman, declined to comment on the specific cases, but said all steps have been taken to improve the vigilance mechanism.

“This time, we have taken a far more stringent view on things like data piracy and not following of the code. I intend to keep making it stronger and stronger and improve the compliance and vigilance mechanism with every new study,” said Bhasin.

As per the procedure, on receiving the complaint, the disciplinary committee  in all the cases called both the parties (complainant and the defendant) and examined the facts.

“No monetary penalty or criminal action was taken in any case, as the publishers were quick to follow the orders passed by the committee,” said a source. However, in the case of the consultancy, the mediation process did not work. The consultancy continued to circulate and use IRS data without subscribing to it. The council is waiting for a formal reply to the notice if not satisfied with it and they continue to violate the norms, the council may take criminal action against them.

Sources in MRUC further hinted that the council is considering making the norms stringent.

“We will be redrafting the rules and make them more stringent. We did realise that there are some loopholes which publishers exploited,” the source added.

Bhasin again neither confirmed nor denied it, saying “we are not changing them per se but may improvise them and most importantly, ensure that they are implemented with full gusto.”

Also, according to the code of conduct, “Any claim for “leading”, “No.1” or to establish top position by any parameter/s should ONLY be based on a like to like comparison, i.e. the same set of readership/listenership/ viewership data to be compared amongst publications/radio stations/ TV channels/ any other media, sourced only from IRS 2017.”

However, soon after the declaration of the survey result, most publications used ads comparative advertising strategies to establish their supremacy.

Jumanji: The Next Level premiere on &flix and Zee Cinema clocks 34M impressions
2 minutes ago

With the big four of FTA getting more eyeballs, are advertisers too making a comeback?
2 hours ago

e4m Creative Zone: 'You can’t underestimate the power of small talk in our industry'
3 hours ago