Hours before the result of the world’s largest democratic elections, Zomato, India’s leading food tech company, has released a campaign about ‘serving the nation’. The campaign focuses on the significant role the government plays in providing a brighter future for the nation and its citizens. It showcases various political parties arguing over power, which is halted when everyone in the room starts getting hiccups.

The video swiftly employs these hiccups to suggest that “People are thinking about you, maybe you should think about them too” and leaves with a striking message: Leading is a privilege, not an entitlement. Let’s commit to serving the nation, together.

A plea to whoever comes to power – #LetsServeTheNation together ❤ pic.twitter.com/2Ofm1G448Q

This video is the third part of Zomato’s election campaign. It is currently running ‘Zomato Election League’, a ‘Predict to Win’ in-app game in which users can predict the next PM of India to win food rewards. Started in the evening on May 19th, over 776,127 people voted on Zomato in the first 36 hours of polling.

Here is a map that highlights the trends Zomato witnessed in the first 36 hours: 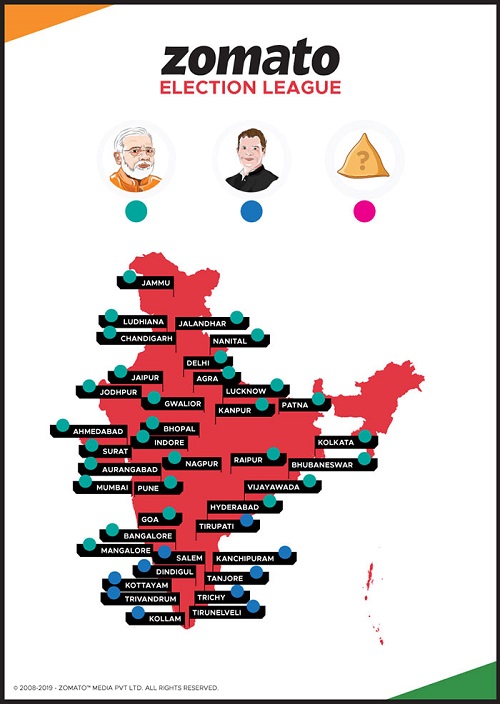 Zomato also designed an awareness video emphasizing the importance of enfranchisement. The campaign draws parallels between people’s reactions to the food poll and the possible reactions to the current elections, apprising them of their democratic duties to vote and not hold others responsible for choosing differently.

Some results aren't in your hands, some are. pic.twitter.com/uXP9kmv36l