#MeToo movement exposes the cracks in media and advertising worlds

Some agencies and media organisations say they are looking into the allegations made against their employees.

The #MeToo movement rocked the Indian media and advertising worlds on Monday. Senior journalist Prashant Jha stepped down as HT Bureau Chief & Political Editor following allegations of inappropriate behaviour. Popular comedy collective All India Bakchod (AIB) announced that two of its Co-founders - Tanmay Bhat and Gursimran Khamba - will be stepping away from the organisation after it emerged that Tanmay Bhat  did not act on the allegations of sexual harassment against comedian Utsav Chakrabarty who was once associated with AIB.

In a related development, Hotstar has cancelled the production of the current season of On Air with AIB in light of the incidents and reports on sexual harassment. On Air with AIB is in its third season currently and began airing on Hotstar two weeks ago. So far, a total of seven episodes have been broadcast online.

In another case of a journalist, Mayank Jain, who has been named in the #MeToo movement, the Business Standard issued a statement noting that due process and an inquiry has been initiated into the allegations against the reporter.

In addition, as many as six senior advertising executives and ad agency founders have been accused of sexual misconduct by multiple women colleagues. These women took to Twitter and blogging site Medium to share their experiences, recounting in detail their encounters with these men at workplace, work-related events and sometimes in private on the pretext of work. One of the women who called out a creative director for sexual misconduct said she wrote about her experience to “make the advertising industry realise that it cannot get away with it just because it’s so small and tightly knit. The whole industry needs to clean up its act.”

Two agencies - Publicis India and DDB Mudra - associated with two men accused of sexual misconduct have told exchange4media that they are in the process of verifying the allegations and taking appropriate action. exchange4media has been informed that iProspect too will look into the accusations made against one of its employees who was hired very recently.

Famous Innovations replied to exchange4media’s query, saying the agency is “shocked” to hear the accusations and is “very conscious about such matters.” But the agency spokesperson did not respond to our specific query about whether or not the allegation against the agency’s head is being investigated.

In its response to exchange4media, Creativeland Asia, whose Founder has also been called out by multiple women, did not mention if an investigation has been launched into the allegations. The agency noted that it has "a robust system completely independent of the management to redress, assist and support, complainants having the employees interest at its heart."

exchange4media asked the agencies, whose employees have been accused of misbehaviour, if they have an Internal Complaints Committee (ICC) as stipulated by the Vishakha Guidelines. Dentsu Aegis Network (DAN) was the only one to inform us about the existence of a Women's Council led by Rajni Menon, CEO, Carat India, that not only looks into complaints of sexual harassment but also welfare of women employees.

Sunil Seth, Head - HR Business Partner, Dentsu Aegis Network South Asia, said that employees are informed about the ICC during induction, through online training modules which is mandatory for all employees to go through once a year, as well as through posters and other communication materials displayed in the office from time to time. He added that DAN carries out "a complete campaign encouraging people to complete the online course which details out the element of behaviours which can be termed harassment. And to re-emphasise, it has situational quiz at the end of every module." 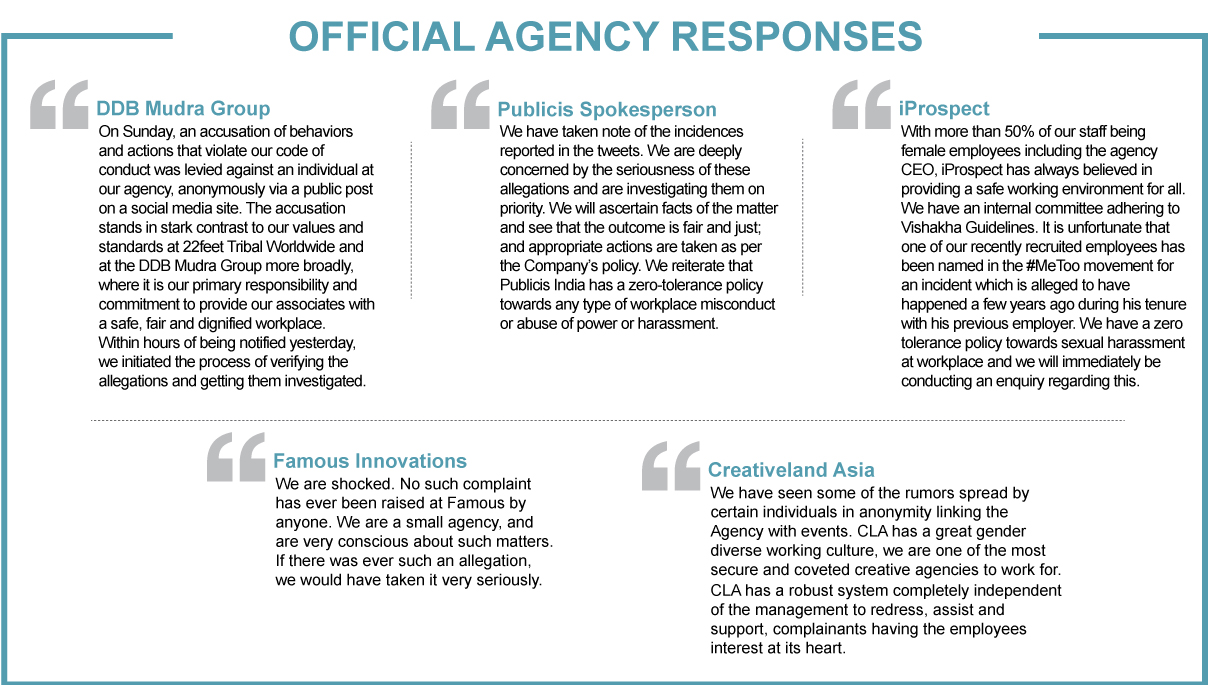 Meanwhile, Women & Child Development Minister Menaka Gandhi has said that irrespective of when a complaint of sexual harassment has been filed, action must be taken. On Monday she reportedly said, " it is important that all the women coming out to call out perpetrators under the #MeToo movement are heard."

Of Mad Men and Inappropriate Behaviour

The world of advertising has always been a ‘Boy’s Club’. Those who use inappropriate sexual innuendo and are sexist are most often never chastised, and it is shrugged off with a “chalta hai” attitude. Women who complain against such behaviour are told that they are "too soft for the industry."

One of the women who wrote a post on Medium detailing her experience at a leading digital agency notes that there was a “trend of sexualising women” at the agency. “Our physical appearance was currency and our attractiveness or the perceived lack of it could decide our value in this company. I know of women who were asked if they were wearing tight clothing because they had a client meeting,” she writes.

One of the agencies belonging to a large advertising holding company that has claimed to look into the allegations levelled against its employee is yet to reach out to the woman who has made the allegation. The inappropriate behaviour of the person was brought to light on October 5 around 10.30am. The woman who named a person from the advertising industry as a “habitual predator” was yet to hear from the agency as of 6pm on Monday.

A woman ex-boss of one of the men accused on Monday confirmed to exchange4media that she too had experienced instances when the person used inappropriate sexual innuendo. “But I believe those remarks, though unprofessional, were made in jest. Knowing that it was unprofessional, I have reprimanded him when he was an employee with us,” the agency head told exchange4media on the condition of anonymity.

Of all the names that were mentioned by women on Monday, Omkar Sane’s (ex-copy creative director, Dentsu Webchutney) is the only one who seems to have suffered the consequences of his alleged behaviour until now.

“Omkar Sane worked with us at Dentsu Webchutney between 2014 and 2015. During his time here, we received official complaints about his behaviour from two employees. Post the investigation, which started the next day, he was let go from his position and the office, immediately,” Sidharth Rao, CEO and co-founder Dentsu Webchutney told exchange4media. He added that the company hasn’t worked with him in any capacity since then.

In contrast, some of the other people whose names have surfaced over the last few days and have been allegedly known to be repeat offenders, have not received any serious rebuke and have instead risen up the hierarchy within agencies, the women accusers say.

And in at least one case where the woman had brought the issue to the notice of her seniors, her experience was “dismissed.” She was made to meet a senior woman employee who asked her if she wanted to file a formal complaint with the ICC. “But in that same conversation that I had with her, she discouraged me to complain as it would be a whole thing and that I should move on with my life,” the complainant told exchange4media on the condition of anonymity.

An executive from agency What’s Your Problem has also been accused of sexual misconduct. exchange4media will update this report after reaching out to the agency.

Globally, the #MeToo movement began about a year ago when allegations against Hollywood producer Harvey Weinstein encouraged many women, and in some cases men as well, to speak out about their experience of sexual harassment at workplace or being exploited or attacked sexually by men in power.  In India, the #MeToo movement began with actor Tanushree Dutta speaking out about her experience with actor Nana Patekar. 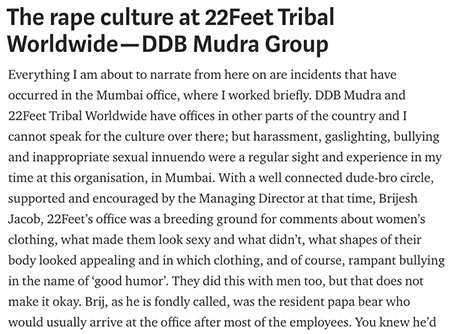 If you can’t print it, it’s not worth it, says Fujifilm India
21 hours ago