Inshorts survey: 1 out of 4 Indian voters do not believe EVM to be authentic

The survey highlights that 24 per cent Indians are doubtful of the authenticity of EVM. The survey saw participation from over 2 lakh subscribers across the country

English news app, Inshorts, published the results of its ‘Pulse of the Nation’ survey on the outlook of young Indians in the upcoming general elections. The survey highlights that 24 per cent Indians are doubtful of the authenticity of EVM. The survey conducted on the Inshorts app saw participation from over 2 lakh subscribers across the country in the month of March. The majority of participants were from - Delhi/NCR, Mumbai, Bengaluru, Pune, Hyderabad and Chennai. These typically represent, urban millennials, aged between 18 to 35 years.

Commenting on the survey, Azhar Iqbal, CEO, Inshorts said, “The upcoming Lok Sabha elections have created a euphoria amongst urban Indian millennials. Gone are the days when casting votes was considered a burden, the overwhelming response of the survey throws light on how the perceptions about elections have changed. Nowadays, people are aware about their rights and consider casting votes, a responsibility as citizens.” 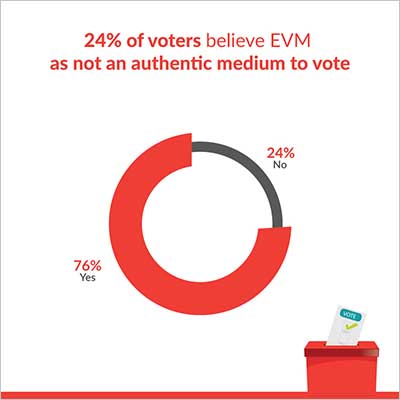 Political Elections in the Digital Age
Today the power of digital is manifested in all aspects of our being. When asked if EVM is an authentic method to cast votes, 76 per cent of the survey respondents were in favour of it, however, 24 per cent still are doubtful of its authenticity. Over 46 per cent Indians think that option of NOTA (None of The Above) is not functioning well to bring out the purpose of voting. 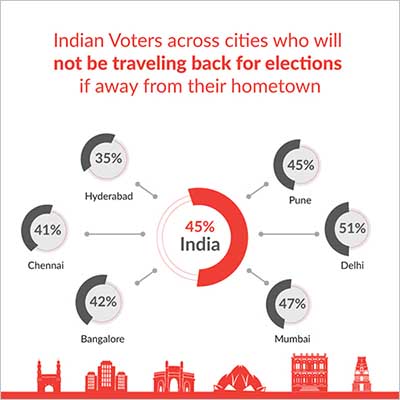 Problem of Lost Votes
Lost votes have been an issue witnessed in every election. The phenomenon was also seen in 2014 Lok Sabha elections which saw only 66.38 per cent voters turnaround, however, highest in the history of Indian general elections. Due to the lack of digital medium of voting in the election, a lot of voters also miss out on exercising their voting rights since many live in other cities for job, business and education and have to skip voting because of travel constraints. As high as 45 per cent of voters in the survey cited that they will not be traveling back for elections if away from their home-towns. 51 per cent of the voters residing in the capital city of Delhi/NCR as per the survey will not be going back to their home-towns for elections. The same trend is observed in other cities too, such as - Mumbai (47%) and Pune (45%). Increased awareness of Voting Rights
Indians today are increasingly becoming conscious of their voting rights in a democracy and 85 per cent of them in the survey have highlighted that voting should be made compulsory. It is interesting to see that while 85 per cent said that voting should be made compulsory but only 63 per cent cast their votes every time without fail. People put in much thought before casting their votes in support of one candidate over another. 74 per cent of Indians stated in the survey that they do extensive research about each candidate before voting for them to win from their constituency. Although the difference may be small but cities such as Hyderabad (77%), Pune (75%) and Bangalore (75%) are ahead in comparison to others in terms of making an informed decision before casting their votes.

Bumble celebrates its diverse community with latest campaign
14 hours ago