Brands dancing to the tune of ‘Apna Time Aayega’

From Zomato to Netflix, Mumbai Police, Durex to Barbeque Nation, a number of brands have been using ‘Gully Boy’ memes to grab eyeballs

The ‘Apna Time Aayega’ rap song from the soon-to-be-released ‘Gully Boy’ has taken over the internet. The trailer of the movie, starring Ranveer Singh, Alia Bhatt and Kalki Koechlin, has caught a lot of attention for its out-of-the-box presentation and created a buzz on social media platforms.
Not just memes, brands also seem to be joining the rap race.  From Zomato to Netflix, Mumbai Police, Durex to Barbeque Nation, a number of brands have been using ‘Gully Boy’ memes to entertain the audience.

With the Zoya Akhtar directed film nearing its release, brands have formed collaborations with the movie. Zomato and Torex cough syrup have launched TVCs featuring Ranveer Singh, where we see the actor promoting Zomato’s super-fast delivery in one of the ads.
We reached out to experts to find out how brands would benefit by collaborating with the high-octane actor.

According to N Chandramouli, CEO, TRA: “Ranveer is a versatile actor who wears his attitude on his sleeve, much like gully-rap artists. He too represents a sub-culture in Bollywood, which has come to accept his unconventional persona into the mainstream. Brands must stay subtle and be a natural part of the story, rather than treat it like any other normal Bollywood movie or actor. If the brand tries to do anything too blatant, it will backfire as Gully Rap and ‘Gully Boy’ are meant to be representations of authenticity.”

Offline retail chain Big Bazaar has collaborated with Emiway Bantai, one of the rappers in the upcoming movie, to make the ‘Sabse Saste 5 Din’ announcement which was held between January 23-27 across Big Bazaar stores. Pawan Sarda, Head of Digital, Future Group, spoke about the collaboration fitting the philosophy of Big Bazaar. “Digital is all about topicality and  how best a brand can integrate the same in its storytelling. Thus with the buzzing rap culture catching the fancy of the entire nation, we chose to do a ‘rap’ to announce the launch of Sabse Saste 5 Din with Emiway.” 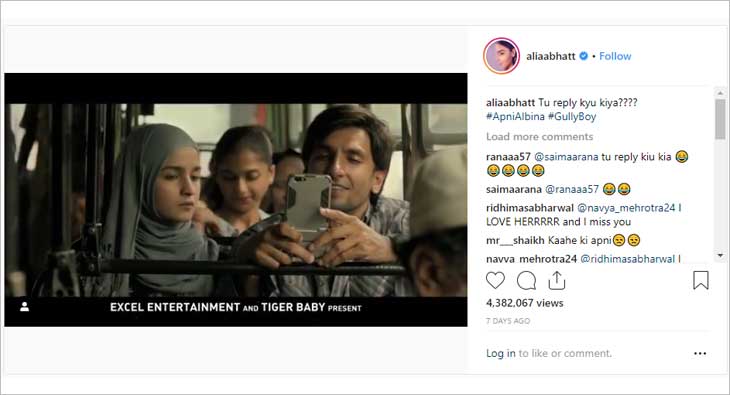 Leveraging the dialogue promo post, Truecaller joined the conversation and responded to Alia's Tweet and Instagram post, saying “Glad we could help Safeena find #ApniAlbina when she needed it the most.” The promo was optimised well by Truecaller. The conversation also saw high engagement from users who lauded the brand commentary.

“Gully Boy represents a sub-culture of Mumbai that talks about the phenomenon that has been now termed as "Gully Rap". This rap originated in the back alleys of Dharavi, and is the voice of people who do not get represented in the mainstream,” Chandramouli said.
“The brands, which choose to associate with the movie, are those who are willing to experiment with this new sub-culture language, which can surely be expected to be a part of mainstream in the near future. Such brands will be pioneers in their path and will get a new audience to connect and build relationships with,” he added.

Brand expert Aman Abbas, Co-Founder, Commwiser Consultants LLP said, “In today’s content-cluttered world, films like ‘Gully Boy’ give brands a short term but potent kick to stay current and connected with their audience. Gully Boy’s situations and dialogues have given great ammunition to brands to create some of the most brilliant creative takes. We have already seen some great engagement on social media, which is a testimony that the audience is responding to these campaigns. They have created great content in the past and almost always connected with the audience immensely.” marketing 'Lock screen is the landing page of the phone; what if it becomes something more?'
45 minutes ago

marketing Brand purpose and brand growth can go together: Rajesh Ramakrishnan
58 minutes ago