There’s a movie releasing this weekend. And there are all chances that you heard about it first from the actors of the film themselves, who shared live updates on Facebook or Instagram. Later, your social media timeline was flooded with posts of trailers, Facebook Lives and in some cases through Facebook messenger chat bot. Movie marketing is changing. Unless you live outside the digital realm, you hear about a movie release months ahead online, not in newspapers or theatres.

Historically, movie marketing in India has been led by trailer and song launches on television and interviews and gossip columns about the film stars in newspapers. Over the time, YouTube grabbed a piece of the movie marketing pie, becoming any fan’s go-to medium to watch everything movie-related and listen to the latest tracks on loop. Armed with an array of products to amplify the reach, engagement and conversions, Facebook and Instagram have also now become key parts of the movie marketing journey.

According to the Ormax Media study, Facebook and Instagram lead the pack of marketing media platforms in terms of Buzz Power or the talk value around a film. The study also shows that the combination of Facebook and Instagram contributes most to first day box office collection at 21 per cent. YouTube comes in second at 18 per cent. 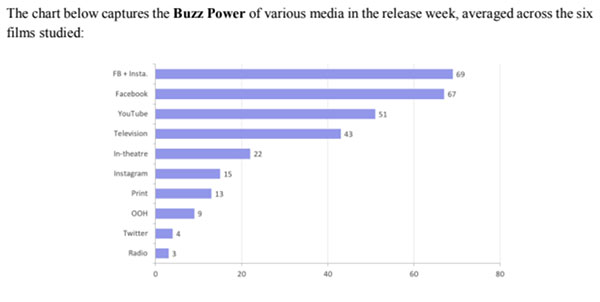 Speaking about Facebook's impact on the Indian movie business, Saurabh Doshi, Head - Entertainment Partnerships, APAC, Facebook, said, “Facebook is a great place for fans to directly connect with their favourite stars and movies and drive reach and engagement. We aim to become the go-to destination for celebrities and movie marketers to promote and connect with their followers in an authentic way and experience the power of organic content and first-hand interactions.”

Leveraging the various marketing tools that Facebook and Instagram have to offer has elongated the typical film marketing exercise that used to last just three weeks.

“The marketing window is of 45-60 days right now. In some cases, films create milestones much in advance. Movie makers have realised that if they build a community in advance, when the time comes, they can launch it in the community,” mentioned a Facebook spokesperson while talking on the sidelines of the Ormax Media report launch.

Interestingly, when it comes to Appeal Power or the persuasiveness of the campaign, YouTube is the leader. Most moviegoers make the decision to watch a movie based on the music album of the film which they watch or listen to on YouTube. Given its limitations, Facebook is yet to make a huge dent in the music promotion aspect of film marketing. For now, music videos of only 45-second length can be watched on the platform.

The social media giant, however, has taken note of this gap and is focusing on building music-related products and tools. “Music is increasingly becoming important on Facebook. We are looking at music from both- the user side through Facebook Live for audio launches or groups, and the owners’ side through Rights Manager to protect the copyrights of content creators,” said a Facebook spokesperson on the platform’s growing focus on music content.
The spokesperson said that since the Appeal Power gap between Facebook and YouTube is not very high, “as we build the music ecosystem, we expect this distribution to change very rapidly.”

The Ormax Media study found that Facebook and Instagram together contribute to 25% or Ts 7.5 cr of first day collections for A+ category movies. For A and B category movies the combined contribution is 17% (Rs 2.6 cr) and 20% (Rs 1 cr) respectively.

Movie makers and actors use Facebook and Instagram to engage with fans and viewers, offering them snackable content and also hosting Facebook Live interactions for promotional activities. Facebook also debuted a camera filter for the movie Sanju, using which fans could try on Sanjay Dutt’s jail look.

One of the features that has the most potential is Facebook’s messenger chat bot, which has been used by Fox Star Studios for the promotion of Baaghi 2 and Sanju. The bot, which allows the movie makers to incentivise users for engagement, works as a native ticketing platform. While there is no data to demonstrate conversions, the Facebook spokesperson said the filmmakers do see a correlation in engagement on the bot and theatre footfalls.

Shikha Kapur, Chief Marketing Officer - ‎Fox Star Studios, who has been an evangelist for the messenger chat bot, had said to exchange4media in an interview ahead of the launch of Baaghi 2 that the bot gives her “a more intimate/high touch way to engage with the film’s pool of audience.
“They're then potentially our evangelists who will propagate our stories to their friends and family,” she had said.

Akshay Kumar recently launched the trailer for his upcoming movie Gold on IGTV in addition to also launching it live via Facebook. While IGTV is a fairly new product, its vertical format is a sure winner for mobile users. Facebook expects IGTV to soon have a bigger role in promoting movies.

Ormax Media studied over 25,000 moviegoers across several cities, demographics and strata in a period of six months, assessing performance of nine media basis the impact created in driving movie ticket sales. It covered three different tiers of movies – ranging from large box office openers to niche releases with emerging stars. The six films that were studied were a combination of big, medium and small scale films.

There is no limit to what we can do together, Parag Agrawal writes to his employees
1 day ago

digital There is no limit to what we can do together, Parag Agrawal writes to his employees
1 day ago