Is the Indian OTT consumer ready to pay?

OTT platforms are going all out to acquire customers by upping the content game and playing around with affordable pricing. So will the Indian OTT viewer mind paying?

2018 witnessed a deluge of content offerings from over-the-top (OTT) service providers at much attractive rates, enough to send the viewer into a tizzy, let alone spoil. ZEE5’s diverse catalogue has latest Bollywood titles like ‘Batti Gul Meter Chalu,’ ‘Mulk’ and big-budgeted original series such as ‘Karenjit Kaur’ and movie ‘Tigers’ by Academy award-winner Danis Tanovic.  Amazon Prime Video India has Bollywood titles such as 'Tumbbad', regional hits like 'Savyasachi', gangster drama 'Mirzapur' and popular international original 'The Marvelous Mrs Maisel.' And the best thing is that all this is available at a rate lower than an average movie ticket. This brings us to the haunting question: Is the Indian viewer ready to pay for content, especially with subscription packs from Subscription-Video-On-Demand (SVOD) or freemium platforms like Hotstar, SonyLIV, HungamaPlay and ALTBalaji starting as cheap as Rs 29?

According to Manish Aggarwal, Business Head, ZEE5, if the content library is good, it gets a value-seeking consumer excited to sign up to a platform. “For instance, if a consumer has to take up a one-month plan, he/she will check if there’s enough content for at least 15-20 days. So a consumer looks for depth of content. They are not hesitant to pay for content when they are getting to watch original content, digital movie premieres and live sports. So collectively it’s a huge offering for a consumer.”

What is further helping OTT platforms is the fact that India is one of the fastest growing markets for video consumption on the back of affordable internet (thanks to disruption by Jio) and increasing broadband penetration. Also, as a nation of single TV households, smartphones with affordable data offer a personal screen to the viewers and this advantage is being leveraged well by OTT platforms.

Shrenik Gandhi, CEO and Co-Founder, White Rivers Media, explains, “Three years back, the first apprehension was paying for data after subscribing to a VOD service. Now, with the availability of cheap data, this issue is evaded. Moreover, they offer a personal screen to viewers without being judged.”

According to the recent BCG report, the revenue contribution of the Indian video OTT market was $500 million in 2018. Of this, 82 per cent was from Advertising-Video-On-Demand (AVOD), while the rest 18 per cent was from consumer pay (SVOD, TVOD). The Indian OTT market is expected to generate $5 billion in revenue in the next five years. That too, with much equal distribution. The predicted share is – 43 per cent from AVOD, 32 per cent from SVOD  and Transaction-Video-On-Demand(TVOD) and the rest 25 from global market.

Kanchan Samtani, Partner and Director, The Boston Consulting Group, too believes it is evident that the Indian consumer does not mind paying.  “While the current market operates with a largely advertising paid content paradigm, consumers are not averse to paying for convenient content access that OTT unlocks," Samtani has been quoted as saying. 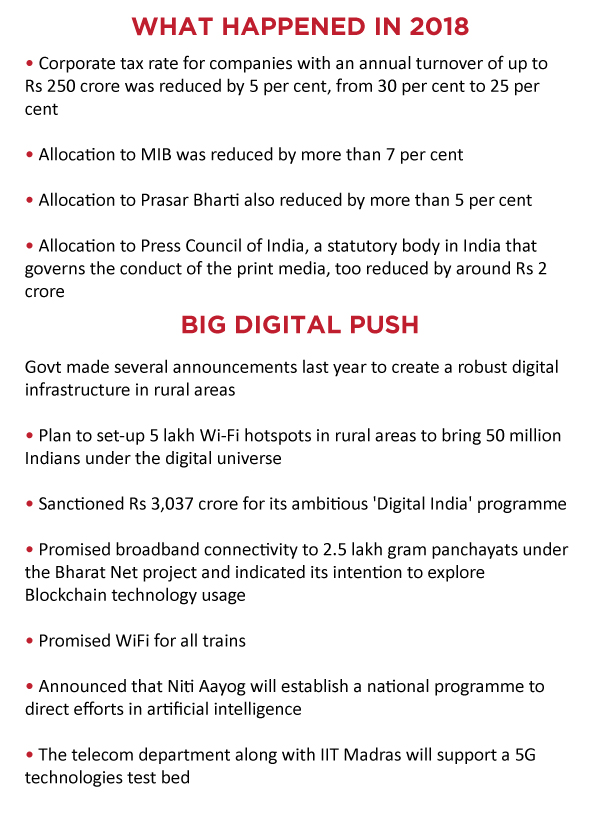 By now, it’s a no brainer that latest digital movie premieres and sports bring in consumers.  Bollywood is the biggest driver and this explains the race for movie acquisition. ZEE5, for instance, had back-to-back digital premieres of ‘Padman,’ ‘Parmanu,’ ‘Veere Di Wedding,’ ‘Stree’ and ‘Batti Gul Meter Chalu’ among others, and they have been well received.

Also, 2018 saw scaling up of original content to a huge extent by national and international platforms such as Netflix, Amazon Prime Video, HungamaPlay, Viu, ErosNow, ALTBalaji and ZEE5. This has resulted in shows which boast of high production value such as ‘Sacred Games,’ ‘Mirzapur,’ ‘Sunny Leone’ and ‘Apharan.’  Dark, gritty thrillers and gangster dramas like ‘Sacred Games’, ‘Mirzapur’, ‘Apharan’ and the upcoming ‘Rangbaaz’ appear to be the flavour.  An industry source testifies, “Action male-oriented content like the upcoming Rangbaaz will drive subscription due to its massy appeal.”

Even sampling (through free one-month) by platforms also brings in consumer to a certain extent. Uday Sodhi, Business Head, Digital, Sony Pictures Network, says, “When consumer gets confidence of getting good content on OTT, he starts off with free and then moves to premium content. We believe that over the period of time, more and more users will be ready to pay for premium content. But there is a trend of consumers paying. And, sports is one of the big drivers.” SonyLIV has witnessed that through cricket (India-England series and India-Australia) and football (FIFA). Also, its recent partnership with Lionsgate is helping its subscription numbers pick up.

The other reason in the rise of subscription is the integration of networks with OTT platforms, points out Rahul Vengalil, Founder, Whatclicks. He throws examples of Airtel offering Amazon Prime Video India and Netflix (for three months) free to its consumers.

“Mobile networks have helped OTT adoption shoot up in India. Also, half of India coming on to video platform for regional content has boosted up adoption of OTT,” he explains.

This is evident from the constant offshoot of regional content offerings, across languages such as Tamil, Telegu, Kannada and Bengali, among others on platforms like ZEE5, SonyLIV, ALTBalaji, Hotstar and Viu. Most of them have tie-ups with regional content creators to stay in the game.

Aggarwal has no doubts about that. ZEEL’s video-on-demand service has been aggressively rolling out shows in Bengali, Tamil and Telegu over the past few months. It had introduced regional subscriptions packs in Tamil and Telegu in November. Kannada was launched recently, starting from Rs 49 per month which is already seeing a huge uptake. “Our regional packs are already contributing high double digits to the overall subscription revenue,” he shared.

The challenge of customer retention

Subscriber retention is one of the daunting challenges in this industry currently, as stickiness of consumers is not very high unless “accompanied by ways in which they engage more deeply with the platform and is associated with strong marketing efforts”, as pointed by Samtani.

According to an industry source, ZEE5 witnessed a spike in subscription numbers post the premiere of ‘Veere Di Wedding’ and original show ‘Karenjit Kaur.’ But immediately after the viewing of the content, the number of uninstalls shot up. There was a similar scenario with Hotstar when it came to their prime properties like IPL and ‘Game of Thrones.’

Agarwal shares that a certain percentage of such users will always exist. “There will always exist that small miniscule of population who will come in for a particular content, irrespective of whether it’s a movie or original content.” But apart from that, he claims, ZEE5 is not facing the issue.

“From AVOD perspective, consumers keep coming to catch up their favourite television show. From SVOD perspective, the consumer is primarily looking for depth,” Agarwal adds.

This challenge of customer retention is around the content itself, says Greg Armshaw, Head of Media, Asia, Brightcove, which works with various OTT players on technology. He explains, “Viewers have access to more content than they ever could consume. The continued increase in the range and breadth of content libraries has created a paradox of choice -- too many content choices often paralysing viewers’ decision of what to watch. Using content as a key strategy for subscriber acquisition and retention has led many OTT TV providers racing to invest in content budgets that now are swelling from millions to billions of dollars. It seems that every OTT TV provider’s content strategy has turned into content chaos.”

But despite the above challenges, with right content strategy and marketing efforts, OTT platforms are confident about consumer’s shift to subscription in the near future. This implies that customers are happy to pay and maybe even stick around if they see value in the content in the long run. 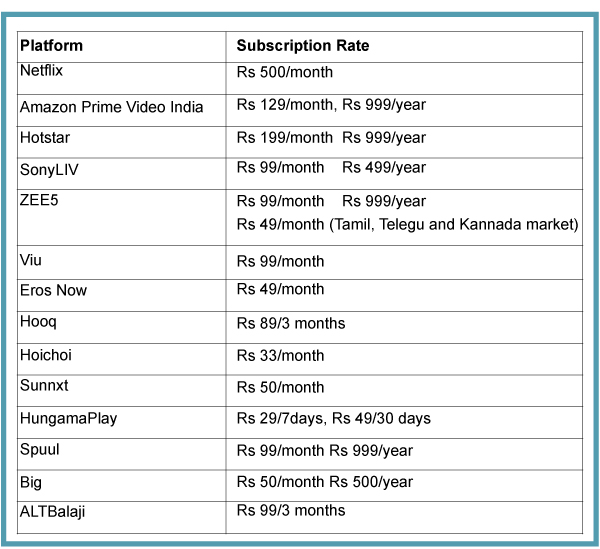 There will be a huge jump in digital advertising when 5G happens: Nandini Dias
5 hours ago

There will be a huge jump in digital advertising when 5G happens: Nandini Dias
5 hours ago

Pay per view is a tough model not just in India but everywhere: Kranti Gada
5 hours ago