Opening the event, Rajan Anandan, VP, India & Southeast Asia, focused on the role of technology in creating more locally relevant experiences in India. He said that voice, video & vernacular were the three big themes that would define the future of internet in India. 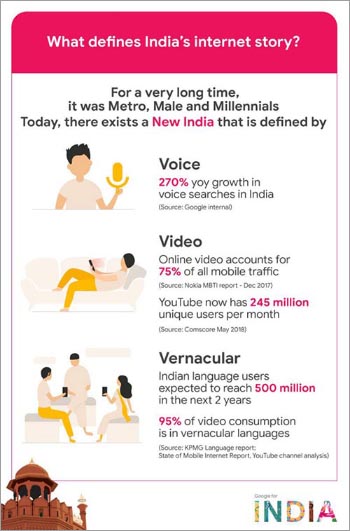 “While voice has been emerging as the preferred mode among new internet users, video now accounts for 75% of all mobile traffic. Also, majority of internet users today are Indian language users, with 95% of video consumption being in vernacular languages,” said Anandan.

Among its key announcements, Google unveiled Navlekha, a new platform to empower offline publishers to digitise their print publications. The platform needs just a few clicks to work and can be handled even without any knowledge of web publishing.

Navlekha will not just allow publishers in India to go online even with content in Indian languages, but will also help over 1 lakh offline publishers to have a presence on the interwebs.

Listen to webpages in Google Go
Google Go, which was introduced last year, will now allow a user to pull a web page and read it loud, highlighting the text word by word in real time. Besides English, it will also be available in Hindi, Bengali, Marathi, Malayalam & Tamil. With this new readability feature, consuming long-form text will become as easy as watching TV or listening to the radio.

The new feature is inspired by a user research in India. It is especially meant for those coming online for the first time. What’s best is that it even works with a 2G connection and uses minimal data. Its AI capabilities will help modulate what’s being said to offer a more ‘natural-sounding’ experience, claims Google.

Google Tez rebranded into Google Pay
In a bid to increase its market share in India’s payment market, Google renamed its digital payment app Tez as Google Pay and introduced some new features that would soon help its Indian users get instant pre-approved loans from some banks.

Caesar Sengupta, who heads Payments & Next Billion Users team at Google, said that customers will soon be able to take customised loan from their banks with minimal paperwork. Once they accept the bank’s terms, the money will be deposited securely & instantly by their bank in their accounts. Google said it will unify all its payment offerings globally.

Google Assistant
Google seems to be committed to localising its Assistant for India by building an Assistant that speaks local languages. Google Assistant, which supported Hindi on Google Home speakers, now adds Marathi to its list and will soon get several other Indian languages as well. It will now automatically understand transition from Hindi to English as we speak. Besides this, Google has partnered with third parties such as Airtel, Where is My Train & Hello English for the service.

Google Maps
Google has announced that the GO edition of the map app now gets turn-by-turn navigation and a completely new home-screen experience. The new experience will also include pointers for public transport, which brings it to relative parity with the full version of the app.

82.5 Communications, the 'Indian' agency, turns one
6 days ago

60% of our growth should be organic; 40% from acquisitions or collaborations: Gour Gupta
2 days ago