Airtel, Flipkart, Pan Bahar Masala among others in the dock for flouting ASCI norms

GlaxoSmithKline Consumer Healthcare Ltd. (Horlicks): The advertisement’s claims, “Horlicks now has two times higher immune-nutrients, that helps support your child’s immunity and make him taller, stronger, sharper”, “Strong inside. Taller, Stronger, Sharper outside”, were inadequately substantiated (in the context of immunity related claims) and were misleading. The advertisement was also misleading by ambiguity and omission of clear demarcation of two separate disclaimers for two distinct claims.

Ashok & Co. Pan Bahar Ltd. (Pan Bahar Masala): Using a celebrity like Pierce Brosnan to endorse a brand, which comes with a statutory health warning “Pan Masala is injurious to health”  would have a significant influence on minors who are likely to emulate the celebrity in using the product. Also, the advertisements did not meet the requirements as per ASCI's Guidelines for Qualification of Brand Extension Product or Service.

Narayana Hrudayalaya Ltd. (Narayana Multispecialty Hospital): The advertisement’s claim, “The only reliable option in treatment of joints related problem” was not substantiated with clinical evidence comparing with other possible options, and is misleading by gross exaggeration.

Abbott Healthcare P. Ltd. (Pediasure): The product is being depicted as an answer to daily balanced diet. The claim that Pediasure provides “Complete” nutrition is misleading and exaggerated as the description in the title and body of the study conducted calls it "oral supplementation". Nutritional Supplement can be only a supplement and cannot replace Normal Nutrition, whatever it may contain. The advertisement’s claim, “Iske 37 Nutrients de “sampoorn poshan” was not substantiated and is misleading by exaggeration. The disclaimers in the advertisement (TVC) are not clearly legible. Also, the disclaimers in the Hindi advertisement (TVC) are not in the same language as the audio of the advertisement (TVC).

Zee Laboratories Limited (Zee Myfair Cream): The advertisement’s claim, “Medically Proven”, was not substantiated with clinical evidence, and is misleading.  Also the claim, “Trust of More Than 50 Lakh People”, was not proven with supporting data and is misleading by exaggeration. Further the claim, “President Award Winner”, was not substantiated with details of the award as well as references of the award such as the year, source and category for the award received.  The advertisement is misleading by omission of a disclaimer to qualify the claim.

Unique Permanent Hair Loss Cream: The advertisement’s claims (in Hindi) as translated into English, “Get rid of hair for a lifetime through cream by applying the cream twice”, “Get rid of the hair on face, private parts, chest and waist just by applying the cream twice”, “100% Ayurvedic”, “No Itching, No Burning, No Spots, No Black Marks”, “You will only Benefit from the use if this cream, it has no harmful effects at all”, were not substantiated with evidence of product efficacy. Further the claim, “Trusted by 6.5 Cr. Indians”, was not proven with supporting data or with any independent audit or verification certificate.   Also, claims of efficacy being depicted via images of before and after the treatment are misleading.

Bajaj Corp (Bajaj Almonds Drops Hair Oil): The advertisement’s claims, “get the nourishment of almonds” and “it has goodness of almonds”; along with visuals showing almonds, without having undisputedly proven the presence of real almond oil in the product in a reasonable quantity was misleading by ambiguity and implication.

The CCC found following claims in the advertisements by 31 different advertisers were not substantiated and, thus, violated ASCI Guidelines for Advertising of Educational Institutions. Hence complaints against these advertisements were UPHELD.

Think & Learn Pvt Ltd (BYJUs Classes): The advertisement’s claim, “70% of our GMAT students in last 8 years have crossed 700”,  was not substantiated with authentic supporting data nor any independent audit or verification certificate, and the claim is misleading by exaggeration.

Millennium Group of Institutions: The advertisement’s claim, “Leader in campus Placement”, was not substantiated with comparative data versus other similar institutes in the same category or any third party validation or research to prove this claim.  Also, the claim is misleading by ambiguity and omission of the reference to the particular criteria for which they are the leader.  The claim, “Awarded for best Technical Education”, was not substantiated with details, references of the award received such as the year, source and category.  The claim is misleading by omission of a disclaimer to qualify the claim.

Flipkart Internet Private Limited (Flipkart – Sale of Titan Sonata digital Watch): The advertisement through website communication claiming the MRP of the product as Rs.599 was false. The advertisement offering a discounted price of Rs.479, when the actual MRP of the product is Rs.399, distorts facts and is therefore misleading the consumers as to actual discount being offered.

Bharti Airtel Ltd. (Airtel): The advertiser states that the recharge of Rs.29 advertised as “Mahiney bhar ka internet” is only with respect to the validity of the sachet pack priced at Rs.29. The supers in the advertisement informs the customers that 75 MB of data is offered on a recharge of Rs.29 with validity of 30 days. It was noted that the advertisement visual depicts tabs for Facebook and YouTube implying that data may be used for these Apps, but for the Facebook and YouTube applications, 75 MB is not likely to last for a month. The claim (in Hindi), “Rs.29 Mahiney bhar ka internet” (Rs.29 Internet for full month) is misleading by ambiguity and implication.

Hindustan Unilever Limited (Vim Bar): The TVC showcases the visual of the “ordinary” bar, which is being aired in South India, where Exo enjoys a significant market share and where it is unique in terms of product presentation (a green round bar in round red container) in the advertisement, implies Exo Bar. Also the voice over makes a reference of "Sadharan" bar (ordinary bar), implying that it is ordinary or inferior. There being no other criteria for calling out a product as “ordinary”, it was considered the TVC to be misleading by ambiguity and implication and unfairly denigrated Exo dish wash bar. Also while the TVC makes a top parity claim, the pack claim, “Vim removes grease fastest*” makes a product superiority claim. There was a mismatch between the claim and its corresponding disclaimer (i.e. “As per independent lab test conducted on burnt food stain”) as the claim refers to “grease” whereas disclaimer and the pack visual appears to show kadhai with burnt food stain being cleaned. It was concluded that the claim read in conjunction with the disclaimer and the pack visual is misleading by ambiguity and implication, and the claim of superiority has not been conclusively proven.

Sebamed can continue claiming their soap is superior to HUL’s, rules Bombay HC
33 minutes ago

Vernacular: The next big driver for Indian digital industry
15 minutes ago 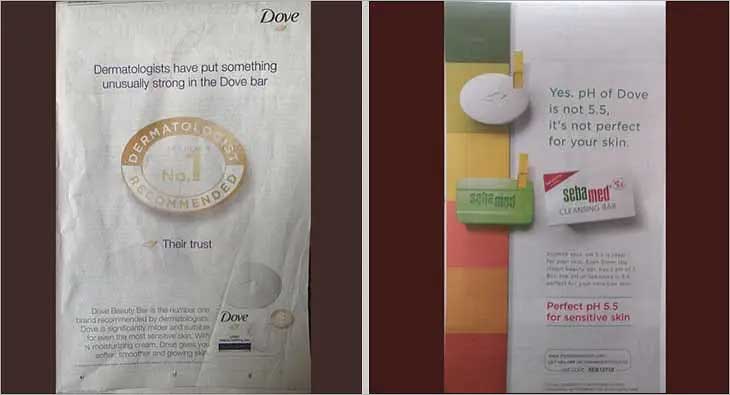 advertising Sebamed can continue claiming their soap is superior to HUL’s, rules Bombay HC
33 minutes ago