Inside the changing world of PR & Corporate Communications

PR has now evolved into a high-level management profession that deals with the core values of an organisation. 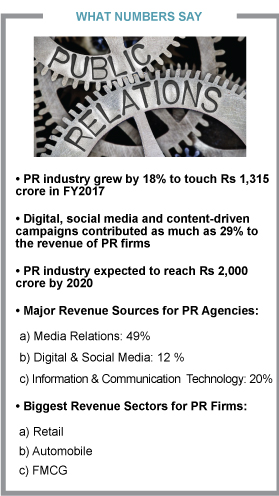 We spoke to some communications professionals who have seen the industry go through a cultural and contextual shift to understand the changing dynamics. According to Kunal Kishore, Founder Director, Value 360 Communications Pvt Ltd, the PR industry has become more comprehensive today than ever before.
He said, “It would be an understatement to say that the PR industry has seen a strategic shift over the years. In my opinion, the evolution of the domain can more aptly be called paradigmatic. From being heavily invested in one-way communications via the print and broadcast media, the space has become more comprehensive today with the advent of the digital. Two-way conversations have become de rigueur to engage with new-age audiences who have a voice of their own and robust channels to express the same.”

Kishore feels that brands can no longer afford to simply talk at their target customers. “They need to engage in conversations that are meaningful and relevant by effectively leveraging digital media, offline activations, and traditional media. The rise of social influencers has further changed the game of branding and marketing, in a way obliterating the practice of hard selling. Brand messages need to be far more subtle and yet far more compelling today than ever before. Shareability and likeability have become critical parameters for brand communications,” added Kishore.

Lavang Khare, Senior VP, Adfactors-PR, believes that PR has seen an interesting onward journey in India and has undergone a complete metamorphosis.

She says, “PR plays an extremely important role in marketing and is the fifth ‘P’ that sits in the board rooms in India (along with price, product, promotion and place). The Indian PR industry is still about earned media, but is not restricted to journalists. The influencers are now bloggers, analysts, industry experts and many other stakeholders who matter in any industry.”

“In the current context, in India therefore, the strategic shift is clearly seen in the presence of communications people in C-suite meetings and the way they influence and drive the corporate strategy. The big change is the way content is curated for social media and how it is strategically leveraged,” said Khare.

Kishore also thinks that while digital has opened up a world of possibilities and made the PR function more critical than ever, it has also made the branding exercise more complex and competitive. “PR campaigns can no longer be planned in isolation and can no longer revolve around putting across the brand's message alone. They need to be contextual and nuanced. They need to place the customer at the core of the communications. This has challenged all the practitioners to be more creative, innovative and strategic, while also making the entire domain of PR more exciting than it has ever been,” he explains.

According to Seema Siddiqui, AGM & Head, PR and Corporate Communication, Schneider Electric-India, “Smart mobility and digitisation have disrupted the PR space dramatically. With it has changed the way organisations are managing their reputation and brand image with their stakeholders and beyond. More often than not, speed is of essence in corporates’ engagement with individuals and other businesses --not just in crises but also for regular inflow of information that can be impacted if the so called ‘stitch’ is not made in time.”

“As we navigate the rough and tumble of real time and the without-filter engagement, the one great outcome has been the way in which corporates have become real and reachable and as much invested in social commitment and politics of the day as an individual. There has hardly been a time as interesting as now to do PR, neither as challenging,” said Siddiqui.

Independent communication consultant Anup Sharma believes that the role of PR firms and in-house corporate communication teams has changed from being a support function to being a key function in developing and implementing strategies to control the narratives and manage truth-trust-transparency.

“Today PR firms are working on programmes not only to create awareness, protect and improve reputation but also to produce revenues. With digital (social) media being the communication channel of choice, now the power to control message has moved directly in the hands of stakeholders, including the competition/haters. So, PR is moving from a broadcast model to an engagement model and PR firms are now working on integrated communication models to share knowledge and findings and create engaging content,” believes Sharma.

How has Deepika weaved her magic on brands
31-July-2019

KFC says ‘Scream and Win’ in Howzzat campaign
10 minutes ago

Recap: The Week That Was
14 minutes ago