Tariff order: 'Broadcasters have lost the battle but won the war'

Reacting to the verdict, broadcasters & MSOs hope new regulation will bring transparency. MSOs, however, say the objective will be met only if broadcasters take the verdict in the right spirit. 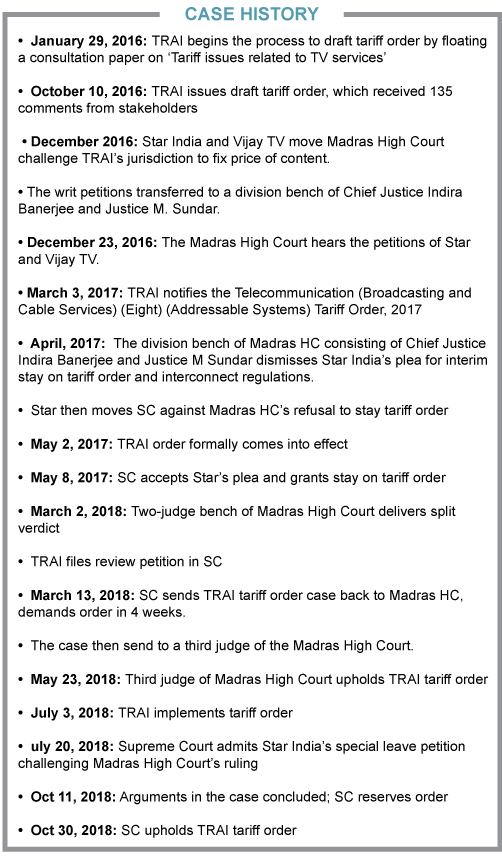 The broadcast and cable industry on Tuesday welcomed the Superme Court verdict upholding the Tariff order saying that the new regulation will bring in transparency in the system. While most major broadcasters did not come out in open on the verdict, one of the first ones to hail it was Subhash Chandra, Chairman, ZEE & Essel Group, termed it as “the best thing that could have happened to the industry and the consumers.”

“I am extremely glad to note the Supreme Court’s order. I think it is the best thing that could have happened to the industry, the players in the value chain and the consumers at large. We at ZEE and Essel Group have always focused on keeping our consumers as our first priority and I am very glad that the Supreme Court’s order has empowered the consumers across the nation. While the overall media & entertainment landscape has been evolving at a rapid pace, it is for the first time in 26 years that such a strong & positive step has been taken to eradicate the lack of transparency in the entire value chain of the broadcast & cable industry. It will certainly help the LCOs, MSOs and the broadcasters,” Chandra said in a statement.

Most service providers have already started working towards meeting the timelines as specified by TRAI in their circular dated July 3, 2018. Welcoming the judgement, Rajan Gupta, President of AIDCF, said it is a “watershed moment”. “This is the watershed moment we all have been waiting for. We feel that the new framework will bring in much-needed transparency & parity and promote exercising of choice for the consumer and ensure orderly growth of the sector. The onus is now on all service providers to put their best foot forward and keep consumer interest in mind by complying with the required initial timelines and activities at the earliest.”

“We are happy with the judgment that came today. It's actually progressive in nature for the complete ecosystem. We think it will benefit the entire ecosystem. We absolutely welcome the decision and feel it will be beneficial for the customer as well as the industry.”

Kerala Communicators Cable Ltd (KCCL) CEO Shaji Mathews thinks that it is good that the regulator has worked on something and tried to change the scenario. However, the objective will be met only if broadcasters take it in the right spirit, he feels.

He explained, “The whole idea of this tariff order is to bring more transparency for consumer on MRPs that the broadcasters charge. Based on the MRPs and their interest, the consumer should choose the channel. However, because of this, the 15 per cent cap and few other suggestions that were there in the beginning are now not part of the tariff order anymore. These were the points which would have been instrumental in ensuring that the a-la-carte rates are affordable to consumers.”

Mathews further added, “Today, when there is no 15 per cent cap or discount that can be given for the bouquet, the broadcasters are free to price the a-la-carte rate up to Rs 19, which is unrealistic. I think the whole purpose of the tariff order is defeated as these vital clauses are removed. Hence, this won’t bring any major changes as far as the consumers are concerned.”

Hyderabad-based Sky Vision MD R S Raju believes that without the a-la-carte price cap, “broadcasters seem to have lost the battle but won the war.”

He opined, “Without the a-la-carte price cap, the consumer is the primary victim. The only significant gain for consumers through DAS was the promise that consumers can pick & pay for only the channels they wanted. With the cap removed, broadcasters will once again declare grossly inflated a-la-carte prices, financially forcing consumers to opt for large broadcaster bundles of pay channels. With no restrictions on a-la-carte price or its discounting, broadcasters seem to have lost the battle but won the war,” said Raju.

Star Plus continues to lead across genres: BARC week 28
1 day ago

media-tv Star Plus continues to lead across genres: BARC week 28
1 day ago

media-tv Will advertisers tune into new-format non-fiction shows on Hindi GECs?
2 days ago