Karnataka is all set for the Assembly Elections results. It is crucial not just on the political front, but also for news channels across the country. Speculations as to who will win majority are doing the rounds and heavy anticipation has also resulted in broadcasters increasing their advertisement rates for the counting day today. 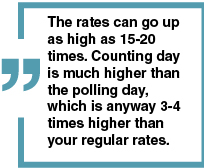 He further explained that there are two to three slots in day where broadcasters spike up rates and for other time bands, rates are normal within three hours of the results being out, following which the rates are not particularly high. "On a counting day morning spots are pretty high,” he added.

A couple of months prior to the elections, few news channels were launched in Kannada including iTV Network’s NewsX Kannada, Focus TV Kannada from Focus Group and Swaraj Express SMBC’s, Swaraj Express Kannada.

“Most news channels create a package where editors come up with some special programming for elections. The whole thing is sold as a package deal as some advertisers don't pay for just one special programme, and they later buy a spot on the counting day,” mentioned a media planner.

On similar lines, a sales head of one of the leading news channels said, “This is a subjective thing. The rates can go up as high as 15-20 times. Counting day is much higher than the polling day, which is anyway 3-4 times higher than your regular rates. On counting day it is purely demand vs supply, so it depends on individual channels as to how much they can monetise. Since it's Karnataka elections, Kannada channels are playing a major role.”

He added, “English news channels will also command a higher rate. They get 3-4 times higher than the actual rate.”

Talking to exchange4media, Clifford Pereira, Director, TV9 Kannada, says, “The Karnataka Assembly Elections results are going to be a cliffhanger as there are speculations about hung parliament, and viewers across the globe will be glued to TV screens majorly because of that. We are live till late evening and special panel discussions and programs will be hosted based on the results. I am expecting viewership more than that of an India- Pakistan cricket match. The advertisement rates increased by 100-150% with limited inventory."

Srinivas Murthy, VP, Marketing TV5 News Network, says, “ May 15, the whole program theme of our channel is based on elections and vote counting. Live telecasting will go on till 10 pm. The advertisement rates witnessed a rise of about 150% than the normal rates. TV5 will be telecasting continuous debates and discussions. We are occupied with 50 live 4G kits and 8 OB vans and we will be doing live interviews with candidates. TV5 is expecting a huge viewership rise during the election result day."

iTV Network CEO, Varun Kohli said, “We did Karnataka Conclave 2018 on 7 May. Karnataka is a very crucial state and this year is all about elections. As soon as we finish this we have MP, Chhattisgarh and Rajasthan. This year is going to be a newsy year. The first battle ground started from Kannada. Apart from extensive coverage on our Kannada channel, we will be airing coverage on our Hindi and English channels as well."

“Suvarna News went live early morning, post the results a detailed analysis with facts and figures by a panel of party spokespersons, eminent analysts and speakers will be telecast. Apart from that Suvarnanews.com will be going to counting centres for the fastest updates and analyses will be presented with easy to understand info-graphics and charts,” said Kiran Appachu, Head of Marketing, Suvarna News.

Pitch CMO Summit 2020: Think how AI can play a role in your business: Jeremy Smart
6 minutes ago

Bobby Pawar has to lead us from good to great in our creative business: Chris Hirst
7 hours ago

GOAFEST 2020 ANNOUNCES JURORS FOR ‘THE RED ABBY’
23 hours ago

VOLTAS HAS GROWN AS A BRAND TODAY, ALONG WITH THE IPL
4 days ago

BYJU RAVEENDRAN: THE TOPPER AND IMPACT PERSON OF THE YEAR
4 days ago