What makes birthday boy Ranveer Singh a hit among brands

As actor Ranveer Singh celebrates his 33rd birthday today, we take a look at his brand appeal 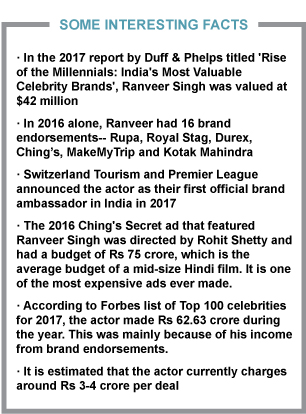 It goes without saying that actor Ranveer Singh’s infectious energy and quirky dressing sense coupled with several hit films have earned him a loyal fan base. As a result, his brand endorsements have always been varied, be it Rupa Frontline, Thums Up, Durex, Switzerland Tourism, Jack & Jones, Adidas, MakeMyTrip, Arihant Superstructure or Kotak Mahindra bank. In 2016 alone, the actor had more than 16 brand endorsement deals in his kitty.

According to brand expert N Chandramouli, CEO, TRA, Ranveer is a brand’s delight as he is not risk-averse when it comes to dressing style, movie assignments and endorsement choices. “You can see him doing things many others may not dare to,” says Chandramouli.

Ranveer fits in for any brand looking for a national appeal, feels Saurabh Uboweja, International Brand Expert and CEO Brands of Desire.

He adds, “Ranveer comes with a cool, bindass attitude, flirtatious nature and a connect with the people. He goes well with the present mindset of Indian viewers. Any brand that wants to add these elements to its personality can use the actor effectively.”

Uboweja feels brands such as Jack and Jones, MakeMyTrip, Ching's Secret's and Kotak Mahindra Bank have utilized the actor’s personality to their advantage very well.


In his latest Kotak Mahindra ad, which promotes digital banking service 811, Ranveer is seen in an interesting avatar.


The ad highlights how the society discriminates people on the lines of religion, caste, creed, looks and sexual orientation, among others. In the commercial, Ranveer dons the role of a bard who portrays the similarities between Kotak’s 811 service and a bench at a railway station that serves everyone irrespective of where they come from. The ad has been received well.

“If you look at Ranveer’s personality, he embodies a very high degree of individuality. Starting from his personality to his demeanour and his choice of films, he represents a generation which is very confident. Making him the absolute right choice to convey the non-judgmental narrative of 811,” she adds.

Venkatraman feels that Ranveer’s diversity is represented in his choice of films. He has played all kinds of roles—from an average Delhi guy to a celebrated warrior. He also essayed a negative character in his last film.

She explains, “The versatility that Ranveer channels helps him build a connect across demographic and psychographic profiles.”

Chandramouli feels that Ranveer is among the few celebrities who consistently have a large number of endorsements.
Brands’ love for Ranveer is because of his high scores on all four appeals-- emotional, rational, aspirational and communication. These are traits that appeal to all brands and human beings. If his diversity works for Kotak, his carefree, roguish charm and daring attitude clicks for Durex.

Ranveer appeared in its first television advertisement in 2014, openly embracing sex. It was the first time that a mainstream Bollywood actor endorsed a condom brand.

The brand made full use of his wicked boyish charm by playing a prank on the audience last year. They released a teaser video with Ranveer telling his fans, “Guys Durex is launching jeans and I am the first one to try it…”

Turned out that it was not jeans but condoms that could easily fit in jeans pocket!

There was also a time in 2016 when it was said that Ranveer was all over the television . There were media reports of him being overexposed.

But Uboweja feels that every big successful movie will be followed by new endorsements, be it brands or TV.

“He had a big success with Bajirao in 2015, which made him a much-sought-after actor in 2016,” Uboweja said, adding that this is why he thinks the actor is not overexposed.

Despite challenges, TV production houses say the show must go on
18 hours ago