BookMyShow, Uber, Chumbak, Viacom18 and Radio City are some of the clients of the company

The advent of technology has accelerated the growth of marketing across the globe, with every brand seeking an innovative method to reach out to their customers. Paper cup branding is a sector that has not been explored much by the Indian brands. Now, Bangalore-based GingerCup is providing paper cups as a medium for promotions to create buzz about brands and to engage with potential customers.

In an interaction with exchange4media, Devleena Neogi, Co-Founder & CMO,  speaks about the company’s journey, its milestones and much more. 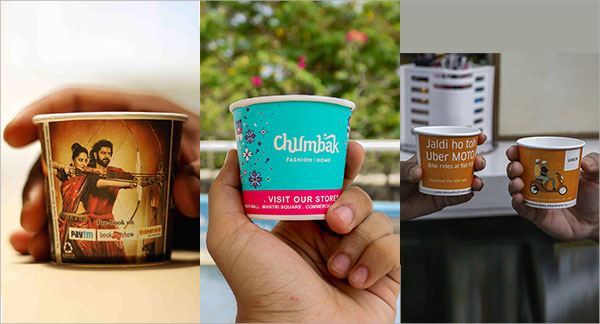 Here’s the edited excerpts of the interaction:

How did the idea of starting a venture called GingerCup emerge?

Before the inception of GingerCup in 2015, Founder Deepak Bansal worked in the IT sector for eight years. During his stint with Samsung Research Institute at Bangalore, he travelled to South Korea often. There he noticed how plain white paper cups were used to display social messages and daily quotes. He also saw a large number of people gathering and discussing a wide range of trending topics.

It was then that he realised that the attention span of people is maximum during tea time. A normal tea break has the potential to trigger conversations. Moreover, if the paper cup in which the beverage is served has the logo or tagline of a brand, it can create more impact.

On delving further into his observation, Deepak learned about paper cup advertising. He told Devleena about it and both of them decided to give it a shot. She too was excited to explore this concept and learn more about the medium since India is primarily a tea-drinking nation.

Back then, cup branding was prevalent in Australia, United States and United Kingdom. Taking their business idea to the next level, they decided to carry out a small campaign wherein they printed few thousand paper cups and distributed them in colleges, co-working spaces and local tea stalls. After surveying the target group, Deepak and Devleena realised that they had come up with a breakthrough advertising concept that offered high engagement levels.

Tell us more about some campaigns that GingerCup has carried out for big clients?

Baahubali 2: We carried out a pre-release cup branding campaign for India’s biggest film franchisee, Baahubali. Seven days from the release of the film, Baahubali 2 branded paper cups were distributed in full swing in corporate parks, offices, colleges, shopping malls, railways, airports and tea stalls. We distributed branded paper cups in 40 cities across India to create hype and buzz around the film.

Hotstar: Executing a cup branding campaign for video-on-demand (VOD) platform Hotstar was another feather in our cap. The campaign was carried out in four major urban cities of India – Bangalore, Mumbai, Delhi and Hyderabad. We distributed a large number of custom paper cups in 80+ companies and 40+ colleges in these cities.

Within a short span of its inception, GingerCup has attained tremendous growth. What are the factors that catalysed the growth?

Our unique advertising medium has triggered the growth for our company. In a highly competitive marketplace, sustaining is key for brands. To break through the clutter, their advertising has to be par excellence. Paper cup branding is a highly unique method of advertising which puts the brand’s message directly under the nose of the target group and in their palms. Unlike other conventional mediums, branded paper cups have the ability to connect and engage with an audience up-close and personal for 5-7 minutes in a clutter-free environment. It also promotes discussion around the brand being advertised.

Looking at the value proposition and cost-effectiveness of paper cup advertising, more clients across versatile industries are attracted by it, and thus approach us for campaigns. We owe our growth to the people around us and our client base.

How far the term innovation is associated with GingerCup?

As far as innovation with paper cup branding is concerned, sky is the limit. In today’s competitive environment, brands do not want something ordinary and hence are always on the lookout for innovative and creative ways to sustain the attention of their target audience.

To cater to the versatile needs of our clients, we are looking for more engaging ways to help brands connect with their target group. We plan on adding a burst of innovation to our paper cups by making them a lot more interactive. From embedding coupon codes and QR codes to revealing exciting offers and facts, we do plan to make paper cups a potent marketing tool rather than just limiting it to serving a beverage.

Heat sensitive paper cups are just one of the ideas we are working on now. Using thermo-sensitive printing, we plan to keep the code/offer invisible until usage thus safeguarding the promotional content only for users who purchase a cup of coffee.

By placing giveaways and codes on paper cups, customers are more likely to retain the paper cup for longer. This in turn causes more people to get familiar with a brand and their logo, thus creating exposure for them.

Tell us about the milestones achieved by GingerCup?

Here are some of the major milestones we have achieved:

• In three years, GingerCup has distributed over 35 million branded paper cups across 23 Indian cities. 80+ companies have used cup branding as a medium for promotion to create buzz about their brand and to engage with potential customers.

• We have tied-up with Jet Airways (International) for placement of our branded paper cups.

• We have achieved a large inventory for placement of our cups which include 750+ companies across MNCs, start-ups, co-working spaces, food courts at tech parks etc. We have also tied up with over 1100+ colleges, 60+ hospitals, shopping malls, and 7 domestic and international airlines and IRCTC etc.

What are the marketing and advertising strategies followed by GingerCup as a brand?

For the past 6 months, we have applied a new strategy. We have joined a start-up ecosystem. In a start-up ecosystem, the marketing benefits are huge. Once a fellow member gets to know you and what you do, they mention your business to others, and may even give you referrals.

Local business organisations have also been a great opportunity for us to create and participate in cooperative marketing strategies such as holding special market days or any other events.

By joining business organisations and networking groups, we have been able to build an audience of people who are interested in our products and/or services.
Another effective marketing strategy we are focusing on is content writing. We try and keep our website informative and updated at all times.

Well, in order to work towards the future, we need to understand our past successful and unsuccessful campaigns so that we can align our marketing goals accordingly.

Firstly, we are trying to make our brand manager understand the unique concept of cup branding because every paper cup has a different story to tell.

As we have a tie-up with IRCTC, we are trying to target a specific product or a company whose target audience would be people travelling in railways. Some of the other sectors that we are targeting include fintech, car pool, self-drive, 2-wheeler rental etc.

Owing to our tie-up with leading airlines, we are also looking to target HNIs (High Net worth Individuals) who take flights frequently.

With the big four of FTA getting more eyeballs, are advertisers too making a comeback?
8 hours ago

e4m Creative Zone: 'You can’t underestimate the power of small talk in our industry'
8 hours ago