The Swedish furniture giant finally opened the doors to its 4 lakh sq ft store in the Hyderabad on Thursday.

On Thursday, all roads in Hyderabad led to India’s newly launched home furnishing Mecca - IKEA. The Swedish furnishing giant's marketing efforts paid off. How? Suffices to say that IKEA had a massive crowd management problem on Day One.

Shoppers who rushed to get a sneak-peek at the store complained about “Tirumala-level queues” and parking problems at the mega launch of the super-store. Roads that led to the store were jammed choc-a-block and consumers complained of traffic jams.

A video being shared on Whatsapp showed eager shoppers jostling the queue to enter the store on the opening day.

One shopper posted a video of the road leading up to the IKEA store:

While consumer woes piled up, the high anticipation that IKEA built up in the run up to the August 9 opening of the first store in India seemed to have paid off. Some media reports cited consumers traveling all the way from Bangalore to shop at IKEA on the first day.

IKEA’s marketing stunts continued until Thursday. Travellers awaiting their check-in bags at an airport conveyor belt in the Hyderabad airport were surprised to find IKEA packages on the belt announcing the launch of the store.

Spotted this morning on the conveyor belt at Hyderabad airport: lots of #Ikea cartons. All empty. Just announcing that the first Ikea store in India opens today! How cool is that. Take a bow - whoever thought of this innovation. And welcome to India @IKEAIndia pic.twitter.com/9YkrTgdZtq

Over the last few months, IKEA has been generating buzz around the brand & products and building brand love for itself . From using VR to give users a virtual experience of what it would be like to walk through an IKEA store to getting consumers acquainted with Swedish IKEA, it has been creating multiple digital content bits and engagement pieces to speak to consumers. The Swedish giant also introduced IKEA and its products by setting up a pop-home in a Hyderabad mall. IKEA finally produced a television commercial in the last leg of the run up to the launch titled - Make Everyday Brighter. 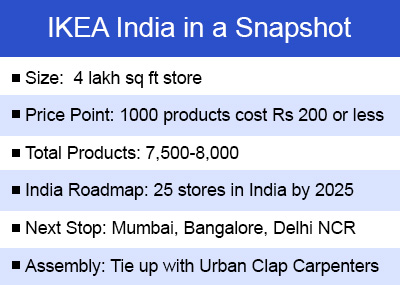 While IKEA has been busy promoting its India launch, local home furnishing companies have been feeling threatened. Future Group’s Home Town was quick to respond to the IKEA fever. Tweeple noticed a poster put up by Home Town near IKEA store in Hyderabad which said: What is not there, is here. The message was subtle but hard to miss. The word ‘there’ was written in IKEA’s trademark blue with yellow background. The ad also claimed free assembly, a drawback with IKEA which is known for its DIY approach. 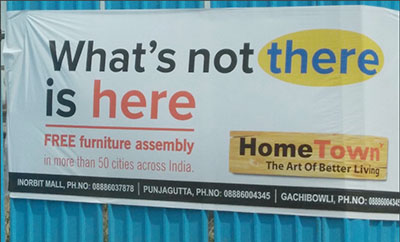