For Qubo, we will focus on TV advertising for next few months: Rahul Jain, Hero Electronix

Hero Electronix, part of Hero Group, has entered the consumer technology market with Qubo, a brand that will offer AI-connected smart devices

Hero Electronix, part of Hero Group, has announced its entry into the consumer technology market with a new brand called Qubo. It will offer a range of AI-connected smart devices.
The company plans to launch new products in the next 4-5 months. According to Ujjwal Munjal, Founder-Director, Hero Electronix, the company has invested close to Rs 350 crore so far in Hero Electronix, and additional investment of Rs150-200 crore will be made over the next couple of years to bring out more devices.

Before rolling out the smart devices, the brand did extensive consumer research for two years. The foray into the smart devices market has come at a time when Chinese brands such as Lenovo and Xiaomi have already established their presence in the space.

Speaking at the launch, Rahul Jain, Chief Business Officer, Hero Electronix, shared why the brand has not been spending on business verticals other than automobile. “Most of the business we had till now was more in the B2B space, and the marketing was restricted in the closer groups. This is our first consumer brand, and we’ve plans to do extensive advertising across all the mediums. In ATL, we will invest in television and outdoor, and in BTL, we will focus on the offline medium like shopping malls, corporate etc,” he said.

“There is a big market for general retail stores as well. There are few pockets in every city that have gadget stores. We would be present there too. We are looking at covering approximately 350 such stores by mid next year,” added Jain.

Jain also shed lights on their marketing budget talking about the mediums the brand will focus on. “Our endeavour is to have about 1 million consumers in the next one year and 15 million consumers across the county in terms of reach. In terms of spend allocated for this year, we will heavily invest on digital because that’s the medium where target advertising is more possible. As much as 60 per cent of spend will go to digital and 40 per cent will be split between ATL and BTL activities,” he mentioned.

Being a new brand, the company will largely focus on the television medium for the next few months. “We are starting through TV. More than 50 per cent is restricted for TV and OOH to reach maximum customers,” Jain revealed.

Once established in the Indian market, Hero Electronix plans to launch Qubo in the international markets by next year.

On being asked how the brand plans to seize the opportunity of festive season, Jain said, “Our plan was to launch before the beginning of the festive season as most of the consumers are interested in buying such products during this time. We will launch our first campaign, leading through TV, by the end of this month, and will do small videos on digital media platforms.” 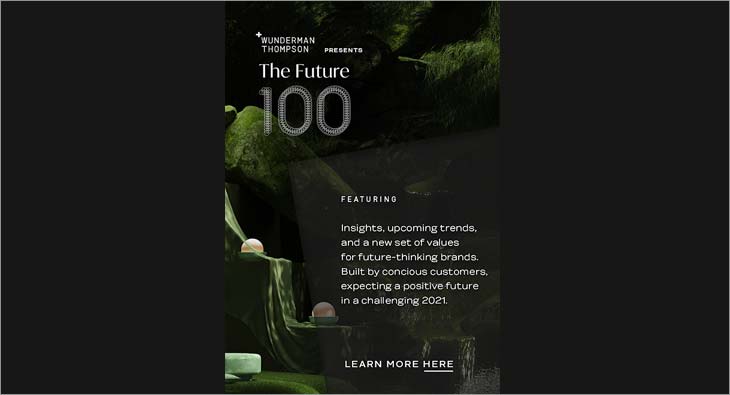 marketing 100 trends that will shape 2021: annual Future 100 Report by Wunderman Thompson
14 hours ago

marketing 'E-commerce, content and performance will be the most critical in 2021'
22 hours ago