Mosquito-borne diseases kill over a million people in India every year, yet little is done to improve the situation. Hindustan, India’s second largest daily, decided to raise its voice on this pressing issue through a 40-day editorial campaign titled ‘Hindustan Machchar ko Takkar’ highlighting the issue of mosquito breeding across cities and the impact it had on residents. This was accompanied with a first-of-its-kind poster innovation across top markets of UP & Bihar contributing to making cities mosquito free.

Hindustan, through its massive on-ground presence across cities in UP & Bihar, orchestrated multiple activities including 200+ school activations with doctors raising awareness about the symptoms of mosquito borne diseases and the importance of clean surroundings, touching base with over 50, 000 children. This was combined with 15 days of mobile awareness van drive and empowering residents to become citizen journalists, giving them an opportunity to raise their voice against authorities’ apathy towards mosquito breeding hot-spots which was in turn amplified by Hindustan. Additionally, 250 samwaad sessions were also conducted across key locations of UP and Bihar with people of influence to engage them on the importance of clean surroundings especially during rainy season.

Along with these activities, Hindustan engaged with larger audience through deployment of over 2 lakh innovative larvicide induced posters across U.P & Bihar. These posters when mixed with rain water converted standing water into a deadly trap for mosquitoes for up to 60 days.

A short video highlighting the campaign can be viewed here:

Talking about the initiative, Rajan Bhalla, Group CMO, HT Media Ltd. said, "Hindustan always believes in highlighting issues of core relevance and working towards providing efficient solutions. The ‘Machchar ko Takkar’ campaign was one such innovative effort in leveraging our reach and network to help our readers combat the menace of mosquitoes. Through the efforts of this campaign, Hindustan continues to deliver on its core brand promise – Tarakki ka Naya Nazariya." 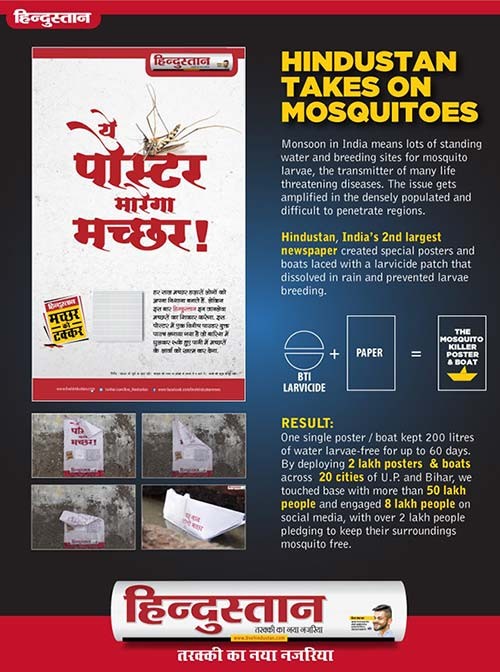 ZEE5 promises an engaging line up for April
14 hours ago

62% consumers want brands to continue to talk to them through COVID-19 crisis: Mark Read
4 hours ago

Advertising & marketing industry will come out stronger from this crisis: Ashish Bhasin
6 hours ago

I am requesting the ad fraternity to stand by us: Arnab Goswami
6 days ago

Anchor Mugdha Mishra moves on from CNBC Awaaz
2 days ago

CREATIVE AGENCIES: PITCHES, FELLOWSHIP AND ADVERTISING IN THE TIMES OF COVID-19
2 days ago

DIGITAL: THE LESSER BRUNT OF AD SPEND CUTS
2 days ago

OTT PLATFORMS: ALL OUT TO WOO THE AUDIENCE
3 days ago

PR WILL DO BETTER THAN MOST OTHER MARCOM DISCIPLINES: MADAN BAHAL, ADFACTORS PR
3 days ago