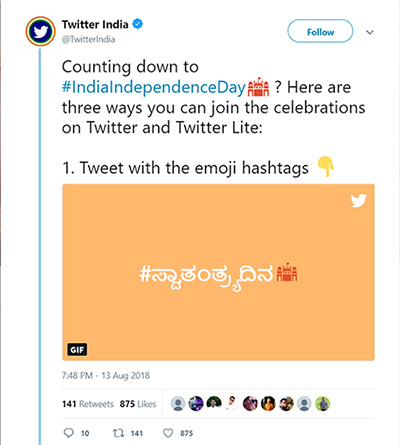 Twitter Lite minimizes data usage, loads quickly on slower networks and takes up less space on your device. Last year, Twitter introduced the Twitter Lite as a mobile web browser experience available on mobile.twitter.com and is expanding the solution to the Google Play store on Tuesday for more people in India to celebrate #IndiaIndependenceDay with.


Twitter emojis are a delightful way to bring together people to celebrate cultural moments and give users a fun way to Tweet, share and celebrate the historic day and express love for their country with live conversations. The Red Fort emoji signifies the historical site where the Prime Minister hoists the flag and delivers his speech from every year on the Independence Day.


Mahima Kaul ( @misskaul ), Head of Public Policy, Twitter India said, “Twitter is committed to add value to the expression of our users, allowing them to share their experiences and views in a more meaningful and engaging manner. With the launch of Twitter Lite Google Play app, the Red Fort emoji and the live streams from news partners available on Twitter to commemorate India’s 72 years of Independence, we are thrilled to bind Indians across the world with a sense of togetherness and celebration.”

No exemption for traditional news with digital media presence in new IT Rules: MIB
1 day ago

digital No exemption for traditional news with digital media presence in new IT Rules: MIB
1 day ago