Hotstar CEO, Ajit Mohan, has been appointed as Managing Director and VP of Facebook India

Putting end to months of speculation Facebook on Monday evening announced that Hotstar CEO Ajit Mohan has been roped in for the top job at Facebook India. Mohan will assume the newly created role of Managing Director for India, a VP-level role, early next year.

In his 20 year long career Mohan has worked across media companies and management consultancies, including a brief stint at The Wall Street Journal as a columnist for the business newspaper. Of all the positions he has held, he is best known for shaping and building Hotstar, the Over-The-Top (OTT) offering from the Star stable. 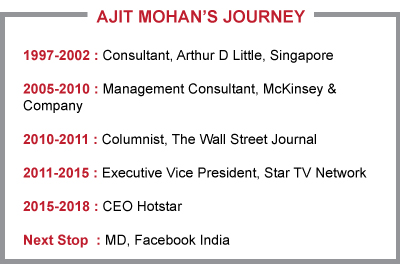 As the digital maverick at Star India, Mohan launched what would be the beta version of Hotstar - starsports.com - in 2013. A man who has always been a thought leader in the industry envisioned a platform that turned into the primary online destination to watch Live Sports content. By 2014, starsports.com had amassed 28 million Daily Active Users who were watching 45 minutes of content.

Starsports.com morphed into Hotstar in 2015 under Mohan’s stewardship. The platform which had had a meteoric rise in the first two years of its launch was set to break all viewership records as the platform and the consumption habits of the Indian internet user changed. Mohan is credited for the success of Hotstar which is the undoubted leader in the OTT space in India with 150 million Monthly Active Users.

In his previous avatars, Mohan has been a Management Consultant in the Media and Entertainment discipline at McKinsey and Company, New York. Later as a Fellow at the McKinsey Global Institute, Mohan studied India’s urban explosion and did research on ‘Building Inclusive Cities and Sustaining Economic Growth’.

Mohan earned his MBA in Finance from The Wharton School. In addition to studying finance, Mohan pursued an MA in Economics and International Relations from Johns Hopkins University.

Mohan will take on his new role at Facebook India in the new year. As MD and VP Facebook India, Mohan will report to David Fischer, VP Global Business and Marketing Partnerships. In the past the head of the India operations has always reported to the Singapore office that controls all of APAC operations, but in a departure to that structure, Mohan will be reporting to a senior leader based in Menlo Park.

There is no limit to what we can do together, Parag Agrawal writes to his employees
1 day ago

digital There is no limit to what we can do together, Parag Agrawal writes to his employees
1 day ago