Amit Akali of Medulla Communications says that 86-year-old Pooran, whom they are taking to Cannes, was on ventilator days before she performed in Last Laugh

It is perhaps the first time that Cannes Lions International Festival of Creativity has brought in an 86-year-old terminally ill patient as a Speaker. The star of the ‘Last Laugh’ video which won many accolades last year for its ingenuity -- Pooran Isarsingh will share experiences of her first on-stage performance at the Cannes Lions stage during a conversation with Heather Bresch, CEO, Mylan on ‘Experiments with Life Changing Creativity’. Taking her to the world stage are Amit Akali, CCO and Praful Akali, Founder & MD, Medulla Communications, the agency that created the award winning video that made you laugh and shed a tear at the same time. The duo tell us why the session will be a crowd puller this year. 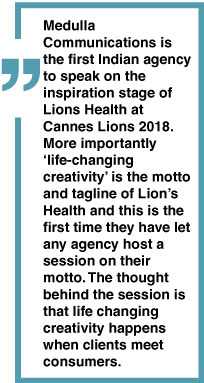 Firstly hats off to ‘Last Laugh’, and to those patients who performed stand-up comedy for their friends and family while battling with death. What more surprises can we expect at Cannes?

Praful: This is the first time an Indian agency will be speaking on the inspiration stage of Lions Health. More importantly ‘life-changing creativity’ is the motto and tagline of Lion’s Health and this is the first time they have let any agency host a session on their motto, thus it is a large responsibility. We have reached out to past winners of Lions Health, jury members and taken into account their experiences on life changing creativity. So we are looking at a collective perspective.

Amit: We are speaking on 19th June and it would be a 45 minutes session. The CEO of one of America’s largest pharma companies- Mylan is sharing the stage with us. Mylan is also our client, we have done advertising for their American market from India, in fact we have been doing a lot of international advertising of late. We are also flying Pooran Isarsingh to Cannes to perform on stage. She will be meeting the CEO and the thought behind the session is that life changing creativity happens when clients meet consumers.

It is really brave of 86-year-old Isarsingh, a terminally ill patient to fly to Cannes for this session, whose idea was it to take her.

Praful: Both mine and Amit’s. In fact when Pooran Isarsingh went to the Visa office after we decided to fly her to Cannes, the visa agent stood up and applauded for her. He said he had never seen an 86-year-old applying for Visa in his office before. She is also probably the oldest Speaker Cannes has ever hosted, so it is quite crazy.

Amit: Isarsingh is also my aunt. She suffered from a Dengue attack, was in the ICU, her lungs had collapsed and she was breathing through a ventilator. In fact I remember waiting outside the ICU and the doctors telling me that she won’t survive. And then at 3am I called up all my relatives from across India and got them to fly down as she was declared dead. But she actually survived those 15 days, started breathing again, was removed from the ventilator and then did perform in the ‘Last Laugh’. She fought back and from then onwards her heart is at 10-15% capacity. We actually lost a couple of the performers from the video we had shot in the last few months.

How did you prepare the patients for the unique video which made people Laugh at death, was it completely scripted?

Amit: A lot of it was from their life. We also got renowned stand-up comedians to train them who helped them draft the script better. Like how Isarsingh told the stand-up comedian ‘I have six sisters, and three of them died.’ So, the comedian put in the joke about she getting promoted and the patient expressed it in her own words and style. So, it was a collaboration. We are trying to write a little different material for her to speak in Cannes.

So, Isarsingh will be performing an all new act at Cannes?

Amit: We are not sure of that. She has just had a knee replacement surgery. She will obviously be speaking, but whether it would be as part of the interview or whether she takes the microphone to do a stand up act, will depend on her confidence level and health at that time. She has had a very interesting life. She spent the first part of her life in Pakistan, was one of the first ever girls to go to a law college in then India and had escaped from Pakistan with her kid brothers. Would be wonderful if she can do the act at Cannes.