Naveen Tewari is Influencer of the Year 2020

At the event, Tewari, Founder & CEO of InMobi & Glance, shared his learnings of the last 12 months

Naveen Tewari, Founder & CEO, InMobi & Glance, has been awarded the exchange4media Influencer of the Year 2020 Award. The e4m Influencer of the Year Award honours visionaries who have transformed the landscape of the advertising industry and invoked next-level growth. The honour was presented to him on Friday.

Naveen Tewari is known for the exemplary work he has done in a short period. He has made his mark by transforming a start-up company into a successful global technology giant. Tewari dived into the world of entrepreneurship quite early when he founded InMobi in 2008 after a brief stint at global consulting major McKinsey. Under his leadership, InMobi, one of India’s first unicorn companies, has now positioned itself as the world’s leading advertising platform.

Tewari’s second business venture Glance is already making a name for itself by delivering personalized content to the users on the lock screen of their smartphones, leveraging the power of artificial intelligence (AI).

Tewari has mentored and supported over 60 budding technology companies so far in his career and has personally invested in several companies such as Razorpay, NestAway, Springboard, Mettl, Klub, Factors.ai, Bright Money, and Bombay Canteen to name a few. He has also served as a Board member at Paytm.

With such striking and business result-oriented achievements, the exchange4media group takes immense pride in conferring the ‘Influencer of the Year 2020’ title to Naveen Tewari.

On being conferred the award, Tewari remarked, “I’m truly humbled and accept this award on behalf of my team who makes these achievements possible. It is amazing to finally be at a physical event that I missed in the last 12 months. There is a lot of god’s grace present over here which makes all of these opportunities possible. At the end of this tough year, one thing has become clear that there are a lot of bigger things in life that we didn’t imagine earlier. These things are important and involve family and friends. It was so touching to see so many things being said about me by my industry friends and family. The video was a complete surprise. e4m is a great platform that recognizes the work people put in, and I’m truly humbled to be accepting this award.”

The event also had a fireside chat between Tewari and Annurag Batra, Chairman & Editor-in-Chief, BW Businessworld & exchange4media Group. When asked about how the last 12 months have been for him and the learnings he has garnered, Tewari shared, “The world has been impacted by everything that has happened in the last 12 months. Although these months have been traumatic when it comes to health and the pain that people have suffered, as humans, we have all come out of this differently. We have evolved differently. In terms of my business, digital has evolved drastically. More than that our evolution as human society and individuals has been faster than what would have taken a decade or two to get to--whether it comes to balancing and understanding the importance of our environment, family, and health. These things have become crystal to all of us and hopefully, they stay with us for a long period. It feels like nature has its ways of cleansing the system and this has been a very broad stroke cleansing.”

“Personally for me, for these months, I’ve felt significantly involved in my thinking, in my ways of dealing with life going forward, and hopefully, it will be for the better. Of course, the last 12 months were tough. It started off thinking about what would happen personally then moved onto what would happen professionally and everyone saying that if you have to manage a business, you have to fire people and reduce cost. But we took a hard call saying we will not let anybody go,” he said.

The e4m Influencer of the Year Award was instituted in 2016. That year, Raj Nayak, then COO, Viacom18 Media Pvt. Ltd, was conferred the title. In 2017, CVL Srinivas, Country Manager, WPP India, and CEO of GroupM South Asia at that time, won the award, followed by Virendra Gupta, Founder & CEO, Dailyhunt, and Umang Bedi, Co-founder, Dailyhunt, in 2018. Last year, the current Country Manager of Google India, Sanjay Gupta was awarded the Influencer of the Year award. 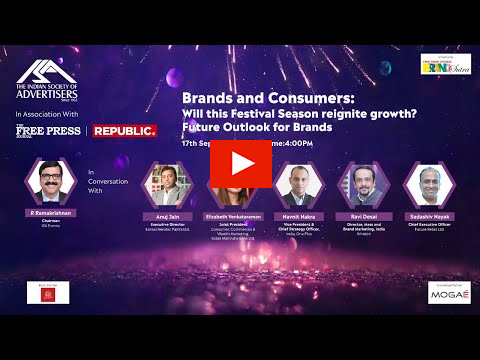