Industry insiders believe that such consolidations also keep in mind the struggles that are plaguing the agency business.

WPP, this week, shook up the industry when it announced the merger of its creative agency J Walter Thompson with its direct marketing arm Wunderman. A move that will see the disappearance of one of industry’s most recognised creative agency names. The newly formed agency will be led by Mel Edwards, who is currently the Global CEO of Wunderman. Tamara Ingram, CEO of J. Walter Thompson, will become Chairman.

In response to exchange4media’s email, Tarun Rai, Chairman & Group CEO, J Walter Thompson South Asia, said, “It is an exciting development as it brings into our fold new and complimentary capabilities and makes Wunderman Thompson a formidable company. The details and logistics are being worked out and will be decided depending on the geography/region. The process will take a couple of months.”

Interestingly, in August, Forrester Research suggested that WPP should look to “dissolve its agency brands in order to meet the CMO’s need for simplicity, accountability, and scale,” thereby restructuring nearly 400 companies into just a few dozen units. It also called for WPP to consolidate its 100 creative agencies within the seven global networks of AKQA, Grey, JWT, Ogilvy, VML, Wunderman and Y&R. 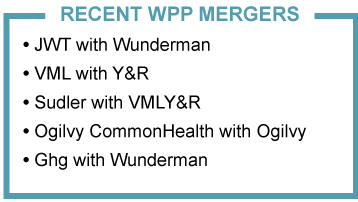 Taking charge as the CEO of WPP, Mark Read had said that the media conglomerate will “simplify its offering” and “adopt much more of a common approach to things like technology, data and production.” The merger of two of WPP giants JWT with Wunderman follows the theme that Read set in early September.

By the looks of it, in Read's WPP, the traditional creative agency is going to adopt a hybrid model that combines multiple capabilities with a strong digital, data science, and technology focus. Technology is becoming the indispensable centrepiece of the agency business. Upon his appointment, Read told WPP staffers in an internal email that “spirit of creativity will always be at the heart of what we do, but pairing that with expertise in technology and data is vital.”

In September, during an address to investors, Read had said that by the end of the year, WPP would look at the non-performing parts of the business in North America and restructure the business by the end of the year. He said, “We’ll address the non-performing parts of our business, primarily in North America, in the creative agencies within the data investment management part of the company as well as any restructuring costs that may be needed in the associated benefits with them.”

With these few lines, Read set the stage for the mergers that followed -- JWT with Wunderman and VML with Y&R. The few months since Read became the CEO, WPP has seen widespread consolidation. Following the creation of VMLY&R, the new entity absorbed the Sudler network to form VMLY&R Health. In addition, Ogilvy CommonHealth joins Ogilvy to become Ogilvy Health and Ghg enters Wunderman to create Wunderman Health. In a similar move, Ogilvy underwent a consolidation earlier this year, breaking down silos in the agency. The transformation of Ogilvy is from a matrix-managed holding company of sub-brands to one brand represented by 12 crafts and six core capabilities along with a new operating system.

The creative agency business has also come under immense pressure of shrinking margins. Industry insiders suspect that the move to integrate offerings also keeps in mind the business struggles that are plaguing the agency business. "While the entire industry is under presure, creative agencies are struggling most as their margins are low. Also, with the onset of so many new agencies in the market, legacy agencies are particularly feeling the heat. Newer agencies have younger and fresh talent that is ready to deliver at a much lesser cost puting the legacy agencies in a spot," said a senior industry person who did not wish to be quoted.

According to another industry expert, the creative agencies need to reinvent themselves in the changing arena and that is what WPP is experimenting by way of the merger. "Everyone is under pressue. One of the biggest losses for JWT came when it lost Ford’s creative account to BBDO after over 75 years of servicing it. All relationships are under pressure and need review," expert added.

In an interview recently, Mel Edwards reportedly said that the merger is “definitely not a cost-cutting exercise", with no job cuts planned as a result. And, as technology reshapes marketing, Wunderman Thompson will also capitalize on close and long-standing partnerships with Adobe, Amazon, Google, IBM, Microsoft, Salesforce and SAP. The merged entity is to employ approximately 20,000 people across 90 markets.

Driving OOH post-Covid: A case for a Unified Measurement System
20 hours ago

Celebrity endorsements in IPL up 92% this year. Is it Covid impact?
19 hours ago