The campaign positions American Tourister as the go-to accessory brand for the youth with its latest range of fashionable and trendy backpacks.

International travel gear giant American Tourister has launched its latest campaign “#Swagpack” featuring ace cricketer Virat Kohli and its newest range of backpacks. The campaign has also launched a ‘Meet Virat’ offer, providing Virat Kohli fans an opportunity to meet and interact with the world-class sportsman. This campaign positions American Tourister as the go-to accessory brand for the youth with its latest range of fashionable and trendy backpacks.

Discussing the new TVC, Anushree Tainwala, Executive Director Marketing, Samsonite South Asia, shared, “I am very excited for the launch of our new campaign. This is the first time that American Tourister has designed a campaign especially for the young generation – the "tweens", the teens and the young adults. Our latest range of #swagpacks have been meticulously designed keeping these customers at heart – their tastes, needs, and attitude. The campaign is a fun, catchy ode to their style and state of being. Virat Kohli is the perfect swag companion, the ultimate swag icon. He is cool and hip both on and off the field, and also on the dance floor!”

International youth icon, Virat Kohli said, “I'm excited to be a part of the new American Tourister campaign. I love the word #swagpack and the new collection launched by the brand. The campaign is fun and trendy with its foot-tapping music, cool dance moves, and edgy backpacks. I am also looking forward to connecting with fans and winners of the ‘Meet Virat’ offer.”

Speaking about the new campaign, Abhinav Tripathi, Executive Creative Director, McCann India shared, “Backpacks are no longer just backpacks. They are an expression of ourselves; an extension of our personalities. They've become a part of our style and swagger, and hence needed to be pitched as such. #Swagpack is an obvious evolution of a popular and a longstanding product, and we believe it will help create a new language and culture for the brand. Virat’s brand of swag is a perfect fit for the campaign, and we’re excited to showcase it in a new avatar.” 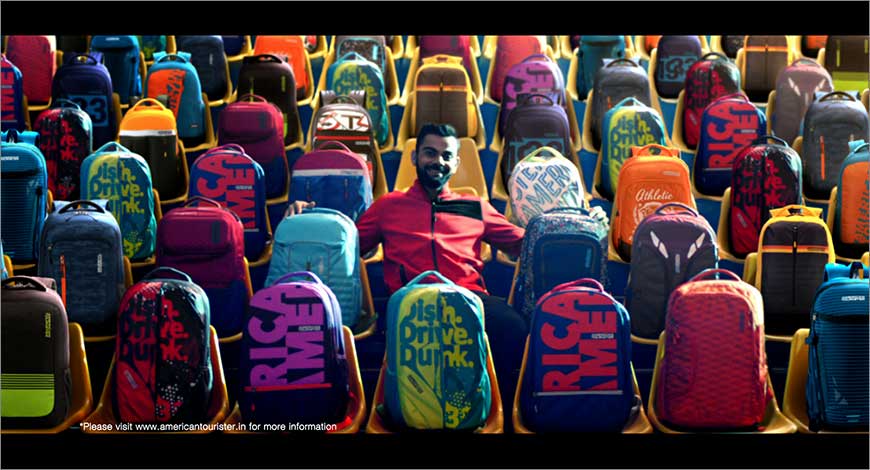 The new campaign aims to create a fresh perspective for the brand. Today’s youth is all about swag. They are bold, confident and cool like American Tourister. Hence, the brand strongly feels that the backpack is an inseparable accessory for the youth to exhibit style and exude the same attitude.

The concept is modelled into a 360-degree campaign, including a TVC and an engaging digital challenge. Virat challenged India, including some swag icons of sport, music, dance, and entertainment such as Skhikar Dhawan, Diljit Dosanjh, Diana Penty, Remo D’souza, Melvin Louis, Lauren Gottlieb, Raghav, Dharmesh, Wild Ripperz, X1X, MJ5, Urban Singh to show off their #swagpack moves just like he does. The challenge was passed on from one Swag luminary to another like a virtual dance-off, across social media platforms.

The film opens with Virat carrying an American Tourister backpack. The shot shifts to a boom box where a dancer switches it on to play the ‘Swag’ track. Virat starts dancing to it with the backpack. A few supporting teenagers appear on screen and dance with the backpacks. We now see Virat again trying out different tricks with different backpacks. Soon, Virat and the teenagers showcase the latest #swagpack collection by American Tourister.