After the success of the recently concluded Vivo IPL, Star Sports has gone all out to recreate the magic with ICC World Cup 2019 that kickstarted on May 30.

The cricketing extravaganza would reach its pinnacle on June 5 when Team India play its first game against South Africa. Meanwhile, Star Sports has upped its game with the launch of ‘Lejayengae’ and ‘Desh ki Mitti’ campaigns. The broadcaster has also taken a bold step by having women front the English coverage of the tournament. This is probably the first time that the coverage of a world event of this stature is being fronted by women.

Gautam Thakar, CEO, Star Sports, spoke to exchange4media about the programming initiatives, on-ground activation, advertisers on board, and Star’s expectations in terms of viewership.

When asked about viewership expectations from the tournament, Thakar answered citing the viewership that the network witnessed during IPL.

“A record number of 462 million people watched IPL this season. The total consumption increased from 300 billion minutes to 338 billion minutes, making it the highest ever in the history of IPL. This wouldn’t have been possible without understanding our viewers’ demands and making our programming according to their taste.”

“We are striving towards the same goal for the ICC Cricket World Cup 2019 as we introduce a robust set of programming initiatives as well as different regional feeds for people to enjoy the content in their desired language. The Star Sports network provides viewers with seven different languages across channels. More than anything, the aim remains the same -- to keep our consumers happy and satisfied with the content that we telecast and produce and hold the reputation of being India’s leading sports broadcaster,” Thakar added.

Talking about their programming initiative, Thakar said, “As we understand the fact that viewers will be looking forward to India matches, we have some special shows for the India matches. To begin with, we have 90 minutes dedicated to pre-show on all match days.”

For the India matches, Star Sports will also have programmes such as Philips Hue Cricket Live, Follow the Blues, Game Plan Match Point and Game Plan and Select Dugout.

“Star Sports is constantly evolving its methods of broadcasting sports content while keeping up with the latest technology trends in the market that were displayed during VIVO IPL 2019,” Thakar said.

Sharing their ground activation plans, Thakar said, “Driving the core campaign thought #CricketKaCrown, the network unveiled the first phase of the #LEJAYENGE activation across cities in India in the week of May 20.”

“The second phase of the activation will begin in Mumbai on June 5, when India will start their World cup campaign. The broadcaster has tied up with BEST buses which will provide free rides to passengers across three prime routes in Mumbai, allowing them to get home in time to enjoy the live action on the Star Sports network. Drivers will be holding a placard, inviting passengers for a free ride to their destination,” Thakar added. 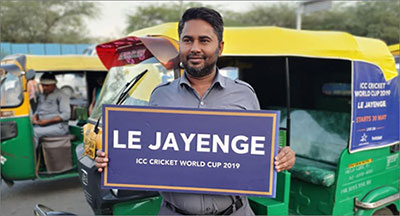