ZEE5, India’s fastest growing OTT platform, has partnered with Brandscope India, the outdoor agency arm of Dentsu Aegis Network to execute a campaign that enables regional markets to get acquainted with the concept of consuming television shows anytime anywhere through their video streaming platform. Taking regional markets into consideration, they focused on communicating the offering of popular Zee Marathi shows on the ZEE5 platform. The 15-day long campaign primarily targets existing viewers of Zee Marathi or those who have heard of the shows on the channel but find it difficult to adhere to the telecast time. Taking a cue from ZEE5’s brief of amplifying creativity and uniqueness across innovations, Brandscope put up a giant LED Scroller and a LED Mobile Screen on billboards displaying the top Zee Marathi and Zee Yuva shows on the platform. To further fuel the interest on the campaign and to highlight the message of “Shows Tumche. Velhi Tumchi” (Your favorite shows at your time) the OOH agency put up a larger than life Motorized Ticking Clock on a billboard.

Brandscope, being committed to delivering new experiences, roped in Ambient, the multi-touch communications specialist and Hyperspace, the shoppers marketing agency to ensure better visibility of the campaign. Ambient OOH created a Sword Innovation with sequential lighting for the cult show Swarajyarakshak Sambhaji as Sambhaji and his significant sword are very popular amongst Marathi speaking households. Hyperspace being the execution experts on ground, worked on bringing these innovations to life. With an aim to design a successful campaign, Brandscope India selected strategic locations of Pune and Nagpur through OOHZONE, Posterscope’s proprietary media planning tool. 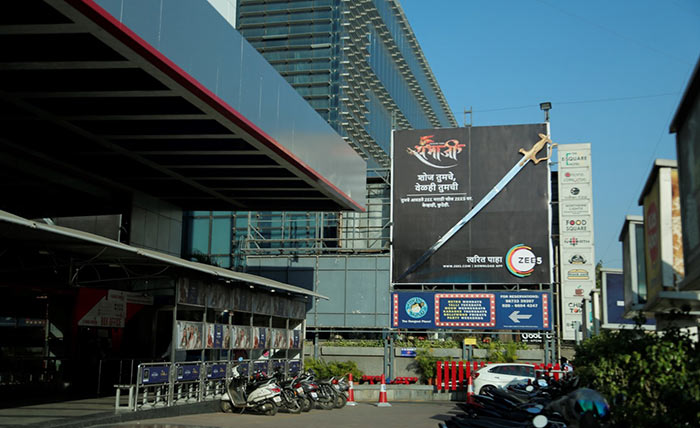 Speaking about the campaign, Manish Aggarwal, Business Head, ZEE5 India said, “OOH has been a huge focus for us in metro cities and this campaign with Brandscope now marks our OOH foray onto tier II and III towns too. AVOD shows from our network channels have been a huge draw for viewers to the platform, in addition to the original content repertoire that we have built. The brief to Brandscope was to build awareness about the hugely popular shows from ZEE Marathi and ZEE Yuva that are available on ZEE5. The OOH module of the campaign ‘Shows Tumche, Velhi Tumchi’ that Brandscope designed, given the insights and philosophy shared, was very impressive. They also roped in multiple partners bringing the best talents together, thus resulting in an uplift of over 20% video views on an average since the campaign went live. It has been a pleasure to work with the energetic and creative minds at Brandscope.”

Anjum Tanwar, ‎Vice President – Brandscope said, “We are extremely supportive with ZEE5’s decision of strengthening their presence in tier-II and tier-III markets. Hence, keeping our communication objective and the target audience in mind, we crafted a campaign that went beyond large-format hoardings and executed innovation at its best. The seamless coordination between Brandscope, Ambient and Hyperspace made the campaign go live in the quickest turnaround time of 3 days.”

Is airport OOH ready for take-off as domestic flights resume?
1 day ago

Adjust your expectations based on reality of the day: Naren Ambwani
5 hours ago

'Post COVID, marketers will need old practices as well as a redrawn communication plan'
6 hours ago