TRAI tariff order case: All you need to know before the court verdict

On March 2, 2018, a two-judge bench hearing the matter could not reach a consensus, after which the case was sent to the Supreme Court. The apex court, however, asked the high court to conclude the matter in four weeks.

The Madras High Court is all set to pronounce its verdict in the Telecom Regulatory Authority of India’s (TRAI) broadcast tariff order and interconnection regulation matter anytime soon.

On March 2, 2018, after a seven-month-long wait, the Madras High Court had sought that the matter, involving Star India, Vijay Television and the TRAI, be referred to a third judge as the two-judge bench hearing the matter could not reach a consensus. In Madras High Court, the case was being heard by Chief Justice Indira Banerjee and Justice M. Sundar.

However, since the case in Madras High Court was heard by the Chief Justice himself, the case went to the Supreme Court, which asked the high court to conclude the matter in four weeks.

Also, there are three interveners in the case-- All India Digital Cable Federation, Indian Broadcasting Foundation and Videocon d2h Limited. The All India Digital Cable Federation and Videocon d2h Limited are supporting TRAI while the Indian Broadcasting Foundation has opposed the Authority.


The controversial regulations and tariff order

1. As per the tariff order, TRAI plans to regulate the broadcast industry by saying that channels, when given in bouquets, should not be a mix of pay channels and free to air channels.

3. Another restriction that TRAI has included is that when channels are offered in a bouquet, the high definition and standard definition formats of the same channel should not be in the same bouquet.

5. There are some other caps which say that discounts on MRP of a bouquet should not exceed 15% and it is mandatory for the broadcasters to declare the MRPs.

The main arguments put in the court against TRAI’s regulations and tariff order:

2. It has been argued in the court that the jurisdiction of TRAI to regulate and fix tariff is limited to carriage or 'means of transmission' and therefore it cannot be extended to 'content', according to the Copyright Act, 1957 (14 of 1957) 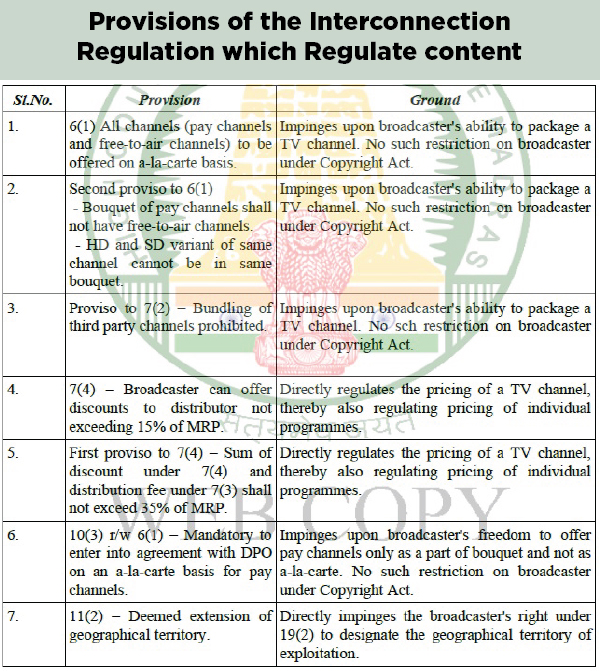 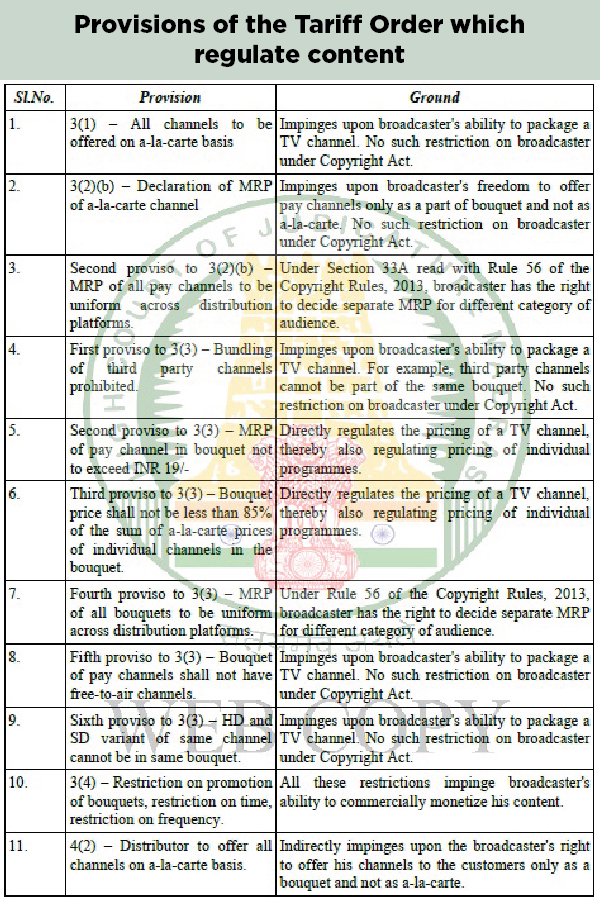 4. The Indian Broadcasting Foundation (IBF) has also submitted that its 56 members, all of whom are broadcasters and own 377 television channels among themselves, are united in opposing TRAI’s regulations and tariff order.

The counter arguments made in the court on behalf of the Telecom Regulatory Authority of India:

1. Regulations and the said tariff order have been made in public interest. They should not be allowed to be assailed in writ petitions impelled by business interests of writ petitioners.

2. Impugned clauses do not regulate the content as television channels are separate products by themselves.

3. The impugned clauses do not overlap with BRR under the Copyright Act as BRR comes into play only when the signal reaches the end users or at least to the STB of the end users.

5. Intervener All India Digital Cable Federation, besides supporting the submissions made by TRAI, asserted that the impugned clauses seek to regulate only the transmission and not the content.

Some important points made by Chief Justice Indira Banerjee in the March 2, 2018 split verdict:

1. I am unable to agree with the conclusion of Justice M. Sundar that the provisions of the impugned regulation and the impugned tariff order are not in conformity with the TRAI Act.

2. Unable to agree that by putting a cap on the price of a bouquet, TRAI is regulating content. The broadcasters are free to choose their channels, offer single or multiple pay channels and one or more bouquets.

3. TRAI has put a 15% cap to the discount on the MRP of a bouquet because according to the data available with TRAI, some bouquets are being offered by the distributors of television channels at a discount of 80% -90% of the sum of a-la-carte rates of pay channels constituting those bouquets. Such high discounts force the subscribers to take bouquets only and thus reduce subscriber choice.

6. The Chief Justice said that this marketing strategy based on bouquets essentially results in ‘perverse pricing’ of bouquets vis-à-vis the individual channels. As a result, the customers are misled to subscribe to bouquets rather than subscribing to a-la-carte channels of their choice. Thus, in the process, the public, in general, end up paying for “unwanted” channels and this, in effect, restricts subscriber choice.

7. Bundling of large number of unwanted channels in bouquets also result in artificial occupation of distributors’ network capacity. This acts as an entry barrier for newer TV channels.