The recently launched Multigrain variant is another step forward in Kurkure’s portfolio transformation journey in catering to the rising trend of consumers looking for tasty yet healthy everyday snacking options.

Kurkure, the iconic Indian snacks brand, launches its new TVC showcasing the newly launched Kurkure Multigrain variant with the goodness of power grain ragi. The recently launched Multigrain variant is another step forward in Kurkure’s portfolio transformation journey in catering to the rising trend of consumers looking for tasty yet healthy everyday snacking options. The new TVC shows Kurkure Multigrain imbibed with benefits of power grain Ragi, along with other wholesome ingredients such as dal, rice and corn,making it the ideal snacking choice for consumers.

The new TVC is a 15-seconder featuring Bollywood actor Chitrashi Rawatin a fun and young avataar. The film starts with her neighbor performing her morning Yoga session, while Chitrashi is seen indulging in Kurkure Multigrain. In between hers stretches, she comments on Chitrashi munching boring namkeen to which the latter replies that new Kurkure Multigrain comes packed with the goodness of Ragi combined with Dal, Rice and Corn and tasty masale. The visual ends with brand tag line of ‘Khul Jaaye Toh Family Bann Jaaye’, reiterating the burst of authentic Indian flavors in India’s favorite snack brand. 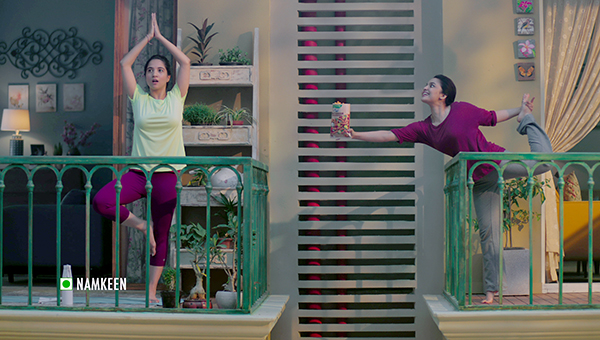 Speaking about the new Kurkure Multigrain and TVC launch, Gaurav Verma, Director Marketing – Indian Snacks, PepsiCo India, says,“Kurkure is India’s most loved snack brand which has been innovating and transforming to cater to changing consumer needs. With the recent launch of Kurkure Multigrain and through its TVC, we are communicating the power of native grain Ragi and how Kurkure is making Multigrain tastier. The initial response to Kurkure Multigrain has been very positive and we are confident that it will be a winning proposition for the consumers”

Varun Channa, Managing Partner, JWT, was quoted saying,“Kurkure has always been innovating with traditional Indian snacks and helping bring together families. In todays’ changing socio-economic structure of nuclear families, Kurkure offers yet another innovative snack and also shares the new way for creating an extended family in your new neighbourhood.”

Blended with the familiar taste of Indian Curry in addition to the flavors of everyday kitchen spices, the new Kurkure Multigrain comes packed in a tastier lip smacking flavor of Curry and Herbs. The new Kurkure Multigrain is available in the winning flavor Curry & Herbs at 3 price points (INR 5, 10 and 20) distributed across India through traditional trade and modern trade channels.
The TVC was released on 28th May 2018across allleading channels.

IOA gets Adani Group as Tokyo Olympics sponsor
14 hours ago

IT raid on Dainik Bhaskar attempt to suppress voice of media, say political leaders
22 hours ago

Bewakoof.com will soon get on television for marketing: Prabhkiran Singh
23 hours ago

marketing Bewakoof.com will soon get on television for marketing: Prabhkiran Singh
23 hours ago