Mondelez India has also committed part proceeds from the sale of these special chocolate bars, towards the healthcare of the daily wagers through partnership with NGO Nirmana

Doctors, nurses and health workers deserve every bit of praise and gratitude that has come their way. Maybe even more than we can ever muster. But they too have a set of people who they depend upon to keep operations running smoothly. The almost invisible, unacknowledged support and ancillary staff at a hospital. The canteen cooks, the waiters, the electrician on call, the ambulance driver and his helper, the janitor, the receptionist, the IT guys, the errand boys, even the gardener. Some heroes aren’t at the frontline, but they deserve to know that we thank them, too.

Mondelez India, as one of the country’s leading snacking companies, believes that it is imperative to acknowledge these invisible heroes, as well, who are working their hearts out to help those who are fighting the survival battle on-ground. With the belief of doing what’s right, the company is taking a step forward in appreciating every individual’s contribution and bringing about a wave of positivity with India’s most loved chocolate by distributing Thank You Bars amongst the entire staff of some key hospitals in Delhi, Mumbai, Bangalore and Kolkata.

Mondelez India had recently announced the launch of the limited-edition Cadbury Dairy Milk Thank You bars, in recognition of the generous spirit of the country’s unsung heroes during these difficult times. The company has also committed part proceeds from the sale of these special chocolate bars, towards the healthcare of the daily wagers, via a partnership with NGO Nirmana. Cadbury Dairy Milk ‘Thank You’ bar will be priced at Rs 40 for 50 grams and will be available as a choice alongside other Cadbury Dairy Milk price points across all retail channels.

'Always a part of our family', says Amul in tribute to Anil ‘Billy’ Kapoor
29 minutes ago

'Always a part of our family', says Amul in tribute to Anil ‘Billy’ Kapoor
29 minutes ago 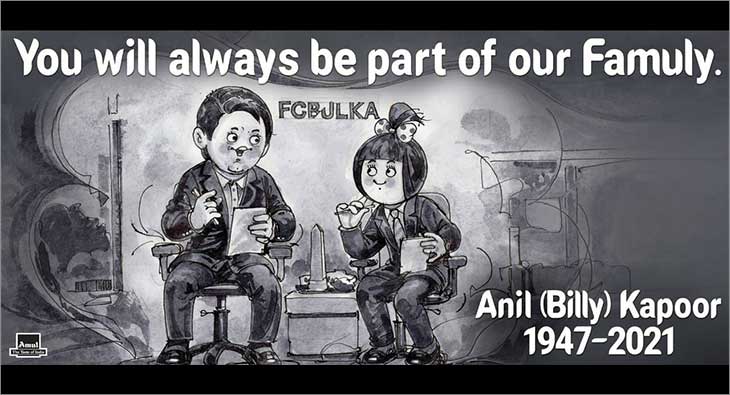 marketing 'Always a part of our family', says Amul in tribute to Anil ‘Billy’ Kapoor
29 minutes ago