At the first edition of Music Inc., a high-powered event presented by MTV and curated by Loudest.in and exchange4media, popular musician Badshah opened up in a candid interview with noted film critic and author Anupama Chopra

He is called the undisputed king of non-film music. His chartbusters over the past few years have become more mainstream than Bollywood songs, and he continues to dominate the Hindi-Punjabi music genre with millions of followers swearing by his music style. Even Bollywood has finally realised that it cannot do without him and now the industry is cashing on his popularity. Such is his clout that he was featured amongst the Top 100 Celebrities by Forbes. 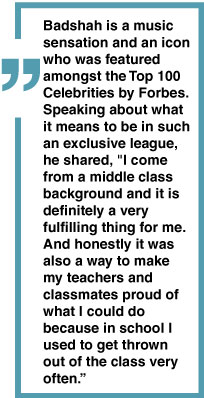 At the first edition of Music Inc., a high-powered event presented by MTV and curated by Loudest.in and exchange4media, music artist Aditya Prateek Singh Sisodia, popularly known as Badshah opened up in a candid interview with noted film critic and author Anupama Chopra about his musical journey and what it takes to become a musicpreneur.
When asked about his multiple ventures that spans from having a clothing line (Bad Fit), a resto bar (Dragonfly) to a music channel, and how he juggles between these varied roles, Badshah said, “The motive is to go all around and utilize the brand name and exploit it in a manner in which we are able to create game changing entities and content. I started a record label and clothing line as I felt there was a market for that in India. I am doing everything where I feel there is a market for it and a gap that needs to be addressed.”

Badshah also spoke about his music journey and his humble background. He also elaborated how he sees himself as a mix of an artist and a brand and now a musicpreneur. “I was not always business minded but I always wanted to make money. When I was seven years old I used to rent comics to make money. I don’t think any business can be done without passion. When it comes to my business ventures, the driving force is to provide a differential solution and that is what guides my businesses. I have recently realized that Badshah has become a brand. Moreover, it is the work that speaks, and to utilize that and exploit that financially is the motive. For me money is just a resource to create more resources and to create more entities. I want to create businesses that will outlast Badshah.”

When asked about the flip side of having too many business ventures and whether it impacts the core of his passion -- music making, Badshah added, “I do realize that the core of my brand is music and if there is no good music there will be no brand Badshah. My biggest strength is my music. I am not a businessman. So I took a break and I started focusing on my music. I have not been to any business school but I am blessed to be surrounded by people who have a great business sense and use those insights to run my businesses.”

There is no doubt that the popularity of Badshah has cut across regions and age groups. Now he is a music sensation and an icon who was featured amongst the Top 100 Celebrities by Forbes. Speaking about what it means to be in such an exclusive league, he shared, “As stated, I come from a middle class background and it is definitely a very fulfilling thing for me. And honestly it was also a way to make my teachers and classmates proud of what I could do because in school I used to get thrown out of the class very often.”

“I have worked in pharma and sold medicines too, I am not afraid of anything going wrong. I try not to do anything that can result in any problems. When it comes to rules of success, I think being honest with one’s work, respecting one’s parents and staying healthy and having a streak of madness is needed to be successful”, added Badshah when asked about his concerns and rules of success.

Levis to launch their collection digitally with Bitmoji
13 hours ago

How brands can reimagine themselves during the pandemic: Bhavya Suri
9 hours ago

Small screens have changed how consumers look at brands: Kavita Nair
18 hours ago

Honey Fraud: Will the controversy snowball into a crisis for the brands?
17 hours ago

A drop of blood is enough to test DNA, says Sunil Lulla on TV audience measurement model
18 hours ago