As per BARC data, the total news viewership in South Indian states stood at 721 million impressions during the Counting Week

Since the beginning of the election season in April, media houses have witnessed a spike in both viewership and website traffic and this reached its peak on May 23, the Counting Day.

According to data provided by the Broadcast Audience Research Council (BARC), the total news viewership in the South Indian states - Andhra Pradesh, Kerala, Karnataka and Tamil Nadu - increased by 416 per cent to 721 million impressions during the Counting Week, compared to the previous 8 weeks. 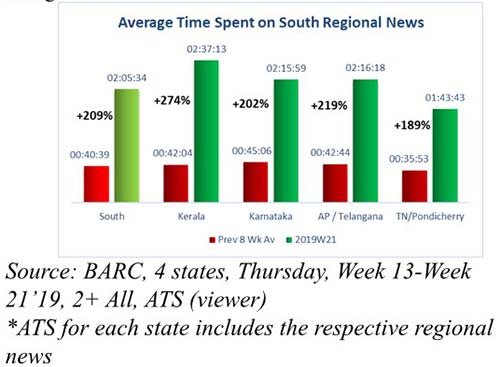 The data further states that out of a total of 258.5 million TV viewing individuals from these four states, 65 per cent (167.3 million) audience watched one or the other news channel on May 23. This is an increase of 67 per cent compared to a regular day. 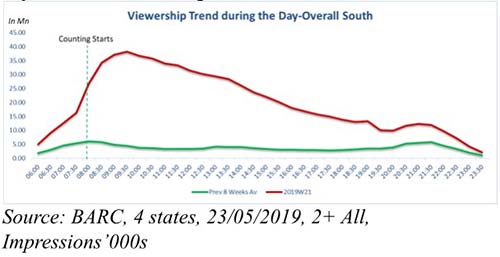 On the Counting Day, the news genre viewership started picking up right from 6.30am, even though the counting process started at 8am. The viewership in all the four markets for the day was the highest between 8am and 12pm. Although the viewership dropped later in the day across markets, it continued to remain high as compared to an average of the previous 8 weeks. Out of the total walk-ins for the news genre on May 23, close to 30 per cent were non-regular viewers who hadn’t tuned into news in the previous four weeks, the BARC report stated. 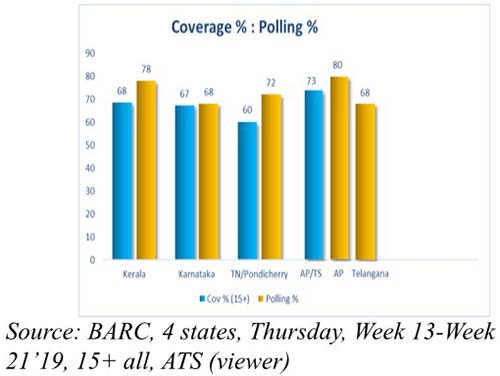 Speaking to exchange4media on the viewership trend, Abhinav Khare, CEO, Asianet News Media and Entertainment said, “The Election 2019 coverage by the Asianet News Group, as a whole, was a historic spectacle. While our TV channels - Asianet News TV and Suvarna News 24x7 - continued to hold fort as the No. 1 choice for viewers, our digital platform Asianetnews.com too witnessed tremendous growth. Analytical dashboards, widgets, accurate numbers, real-time updates and a comprehensive low-down of data all through the elections were the true differentiators across digital platforms. The Asianet News Group acted as a single unit ensuring seamless coverage of the Lok Sabha elections across mediums. With this stellar performance, India’s #1 vernacular media-tech firm is all set to make a larger national impact.”

Analysing the election viewership trend, Sanchayeeta Verma, Senior Vice President, Wavemaker, said: “The surge in news viewership on the Counting Day was not just for the 2019 parliamentary elections but also for the state assembly polls in the recent past. Brands should evaluate this as a platform to get onto during the state assembly elections slated for this year and the early next year.”

Mohan Nair, CEO, Mathrubhumi News, said, “Across the four states, the viewership has increased substantially. Kerala saw the highest amount of time spent - 2 hours and 37 minutes - compared to the other state average of 2 hours and 5 minutes. Around 20-30 per cent of regular GEC viewers have walked in to watch news channels during the Counting Day.”

The report also stated that although growth in viewership could be seen across all age groups, the spike was the highest at 451 per cent in the 15-21 age group, with 101 million impressions in the Counting Week. “This is a welcoming trend as there is a general assumption that the youth consumes news on Digital Media, but the report asserts the fact that news consumption is growing among the youth,” Mohan Nair said. 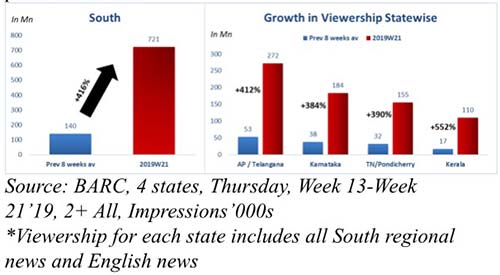 “It comes as no surprise that the youth played a major role in the electoral process in India. South Indians tuning to TV sets is primarily due to the high literacy rate and their keen interest in  matters concerned to politics. Kerala has always consumed news as much as entertainment here. News has always been content-driven and is consumed across all genders with equal zeal and they are vocal about it too,” said Arun S Nair, VP, Sales & Marketing (South), Insight Media City.

Speaking on Insight Media City’s Channel 24’s performance during the Counting Day, Nair said, “There had been so much of enthusiasm and participation from the people of the state in the elections due to the recent political developments which has triggered the increase in the viewership and consumption of news in the state. Real-time data, the use of Augmented Reality, visual graphics, quick and flawless thinking and implementation from the team ensured viewers are glued to Channel 24 during the election results. To reach out to more audience across the Globe, 24 is streamed Live through YouTube which has an organic reach of around 3 lakh subscribers, and we witnessed approximately 1 lakh users watching the election results live on the platform.”

The highest contributors to viewership were in the age group of 41-50 and 31-40 with 125 million and 124 million impressions respectively. While NCCS CDE saw a 70 per cent growth in the number of news viewers, NCCS A saw a 201% increase in the average time spent on TV. The highest polling percentage of 80% was noted in the state of Andhra Pradesh. TV viewership similarly reflects the highest coverage across the southern states for AP/Telangana at 73%.
According to Rani Reddy, Director, Sakshi TV, “The number of new voters in this election across India are estimated to the tune of 45 Million. The young voters who believe that the outcome of the elections will directly impact their needs and aspirations were glued to news this election across platforms making this election to be the most keenly and massively followed election in the history of India. I believe this was the driver for the sharp growth in TV viewership.”

“This time the southern states got more attention in national politics. South witnessed a strong election campaigning and the presence of ruling and opposition party leaders in the south added more curiosity. The share of first-time voters was also significant compared to the previous election. This might be the reason for more involvement from the youth,” said Vimal Raj, Client Leader, Motivator. 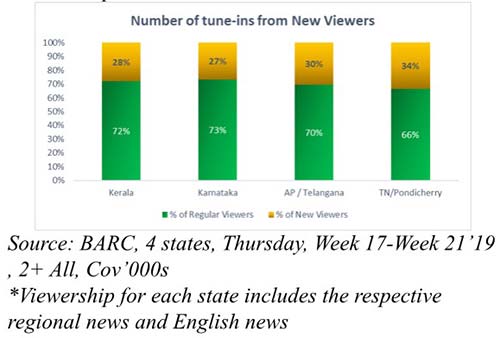 Deepika Padukone stars in Navyasa by Liva TVC
18 hours ago