Campaigns for Himalayan, Gatorade, Rin, Times of India, UNICEF, and Nestle+Power of Print are JWT's best bets at Cannes Lions this year

Six campaigns conceptualised by JWT India are headed to the Cannes Lions International Festival of Creativity this June.

Among them are a innovative experiential campaign for Himalayan bottled water that captured the raw sounds of the Himalayan soundscape and trickled out with the water when the bottle was opened. The others are a fast-paced ad film for Gatorade, an inspirational film to persuade the youth to read the Times of India, a print ad with Nestle and the Power of Print, a campaign on immunisation for UNICEF and a print ad for Rin on water conservation,

The Sound Of Water – Himalayan Sparkling

Himalayan was launching Sparkling Water in the summer of 2018. The challenge was to bring alive the unparalleled source of Himalayan Sparkling water in the world's tallest mountains, the Himalayas. The idea was to transport every consumer to the source of Himalayan water, by inviting them to time travel with the sound of 20 years of drop by drop percolation from the highest altitudes to the deepest streams of the Himalayan Mountains. A muti sensorial experience that elevates the brand into the consumers’ imagination in fine dining restaurants and cinema halls. 100,000+ special edition bottles of Himalayan Sparkling Water were designed with a sound chip built inside.

Two Years In Sound Design: These raw sounds were curated by sound engineers to create an original Himalayan soundscape that was embedded in a waterproof sound chip built inside the bottle cap. The sound of water is triggered by the release of pressure when the bottle is opened and silenced when the bottle is closed.
Two Minutes Of Time Travel: The sound design was amplified with visual projection mapping of the soundscape, stitched together from Himalayan windscapes and waterscapes. This time travel video map was screened when the bottle was opened, on the walls of fine dining restaurants, elevating the experience into the multi sensorial.

The Multi Sensorial Message In A Bottle : This experiential product innovation caught the attention of celebrity chefs, bloggers, editors and social influencers, when word of mouth went viral on the day of the launch in fine dining restaurants, 3D cinema halls and Supermarket Chains across Indian metros. Thousands of consumers were transported to the source of Himalayan water in the world’s tallest mountains, joining the timeless journey of a drop of water in every sense. 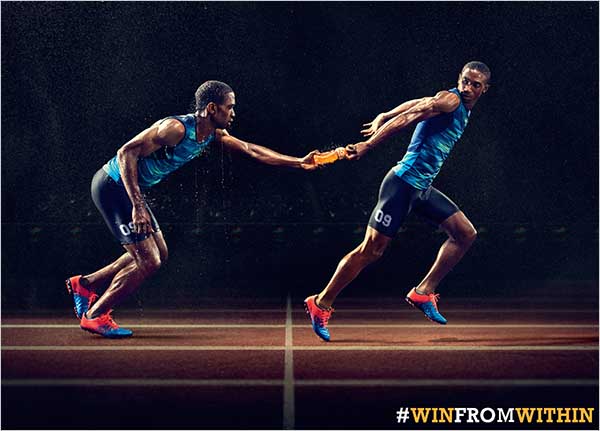 The objective was to motivate athletes, budding athletes and other viewers in the build up to the Commonwealth Games. And bring alive the brand truth of Gatorade in the context of international event and take a leap off the moment. This was a tactical campaign. And like any true sports drink, the brand wanted to be associated with a large sports event.

The idea was to demonstrate the physical relay between the sweating athlete and the same replenished athlete. It was crucial to establish that both athletes are the same person in a side angle shot. The Gatorade bottle as the baton between the two athletes was the central element of the ad. It also kept the brand at the heart of the communication. The approach to art direction was to be minimalistic. With these is mind, the elements were seamlessly integrated. Thus, producing an image that required no extra logo or even a creative expression to explain the idea. The Gatorade bottle is the baton between the sweating athlete and the same refreshed replenished athlete.

The film is shot in extreme slow motion, to bring alive the relay between the sweating athlete and the same replenished athlete. A track using the athlete’s actual breathing plays throughout the film. We open on a frontal close up shot of the runner’s face as he’s in motion. We see the tired athlete as he profusely drips with a lot of sweat. We then cut back to a wider frontal shot of him running holding an orange baton. As he approaches closer we realize he’s holding a bottle. We see intercuts between various shots that build tension as the athlete struggles to pass the baton. We then reveal the baton is a Gatorade bottle that the athlete passes to a replenished version of himself. And we see a replenished version of the same athlete running with bottle as the baton. Followed by the message #WinFromWithin. And the Gatorade Logo.


Times Spark - A Salaam To Kalam 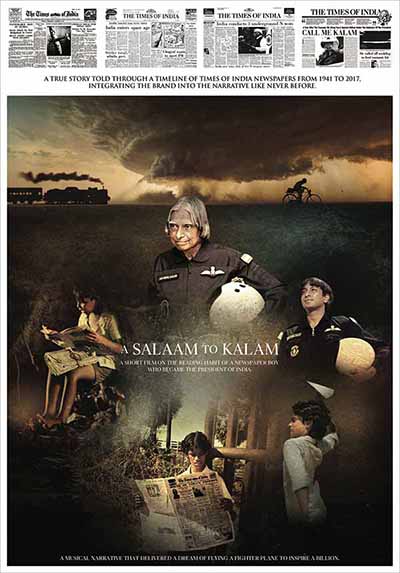 The Situation: Reading Newspapers is not a millennial habit. Less than 3 per cent of young Indians aka digital natives read the daily newspapers. Over 3 million students in English medium schools have read a newspaper. We saw the Opportunity in the problem itself: Today's digital natives are tomorrow's readers of The Times Of India.

The Content Idea: Education through Entertainment is proven as the most memorable form of teaching out there. And it was time to Inspire and Ignite the reading habit. A short film on the reading habit of a newspaper boy who became the President of India. A musical narrative that delivered a dream of flying a fighter plane, to inspire a billion. An inspirational story told through a historic timeline of Times Of India newspapers from 1941 to 2017, building emotional milestones from newspaper headlines into the lyrics and integrating the brand into the narrative through seamless storytelling.

The musical narrative in the ancient Indian form of storytelling through song is set to an emotional rhythm. A historic form that is used in street theatre to move audiences to tears and inspire them to action. A powerful form of inspiration to ignite the newspaper reading habit among digital natives.

The film was shot in custom made anamorphic lenses for wide screen cinema to create an authentic historical timeline from the year 1941 to 2017 with newspapers as the medium of transition. Since we wanted every scene to have an authentic feel, we shot in the original locations where Kalam spent his childhood, delivered newspapers as a newspaper boy, the high school where Kalam was reading the news of Independent India, the Dehradun Flying School where Kalam failed the pilot test, the Indian Space Research Organisation and others to recreate the timeline of his life. It was challenging to maintain a consistent look, across different locations and ensure that all of them ring true but we achieved a distinct look with the visuals and the period narrative form transported the audience deep into the historical musical. The emotional lyrics of Madan Karky and folk singer Antony Dasan feature in the original Tamil language, the mother tongue of Abdul Kalam, with classical folk violins by Karthik Iyer and music by Madley Blues. 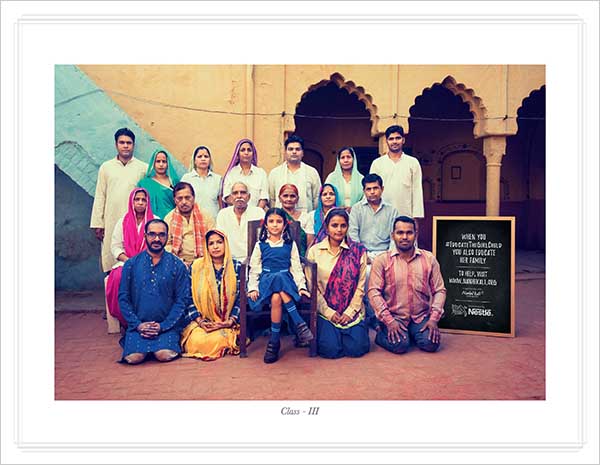 India is haunted by a long past of suppression of girls and womankind. They continue to be suppressed domestically as well as communally and this traces back to when they were girls, deprived of the fundamental right to education. Owing to a lack of means and inclination, traditionally, the country has favoured only boys for education.

In an attempt to spread awareness for this critical issue of girl child education in India, the campaign established the positive relationship between female education and overall development outcomes of a community. It’s often heard, ‘if you educate a man, you educate one person. But, when you educate a girl, you educate the whole nation.’ Educating girls and women is especially effective because when we educate them, the benefits are felt throughout the whole community. Education for a girl child is almost a magic multiplier in the development equation.

The idea was to bring alive the famous quote - ‘If you teach a boy, you educate an individual; teach a girl and you educate the entire community.'
The device of a class photograph has been used to illustrate the fact that when a girl child is educated, she also helps educate the rest of her family and community. So in the photograph, the place of the teacher is taken by a girl wearing a school uniform, and her ‘students’ are the members of her family. 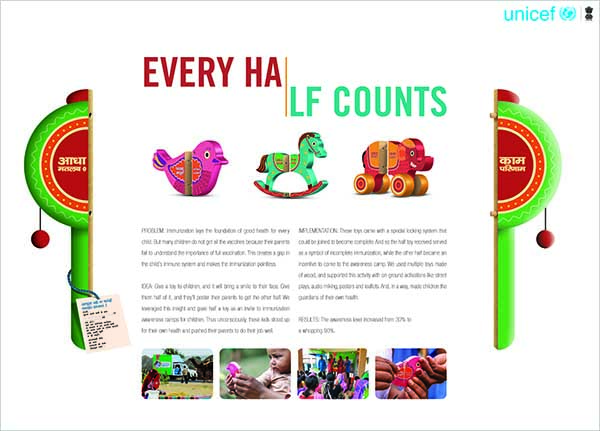 Despite free immunization programs sponsored by the Government, millions of children die in the hinterlands of India due to diseases that could easily be prevented by complete immunisation. However, many parents do not understand the importance of complete immunization and often leave it halfway. Our challenge was to convey to the caregivers of these children that half or part immunization is useless.

The ‘half-toys’ distributed to the kids made them pester their parents for the other half. Thus unconsciously, the kids stood up for their own good health and pushed their caregivers to do their parenting duty.

Volunteers and health workers went around distributing the ‘half-toys’ to villages and places in India that are hard to reach – 4,000 villages, 1.6 million caregivers contacted. The toys then served as an invite to an event where the other half was to be given out along with an important message on the importance of complete immunization. In total 17000 events were conducted. 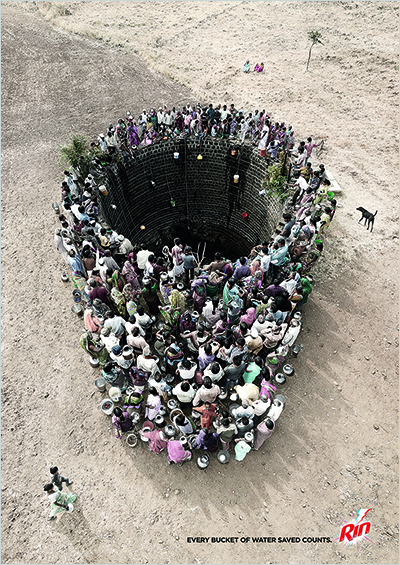 Rin introduced a unique Smart Foam Technology which reduces water consumption while rinsing clothes by half. This led to a 360 degree campaign – ‘Jal Samruddh Maharashtra’ that included building check dams, educational films and on-ground demonstrations on water saving. Having addressed the Maharashtra audience last year, Rin now wanted to reach out nationally to those unaware of the larger part of the country’s struggle with water crises. Create shock value - inspire the ‘haves’ to do their bit to save water, thereby support the ‘have-nots’. Thus create a national buzz among influencers.

Our idea was to create a stark image of an almost- dry well plunging into Mother Earth looking like a bucket which is what most Indians use to do their washing. The well / bucket has perilously low levels of water so it is unable to quench the thirst of the hundreds gathered around it.

The challenge was to make it provocative yet real. To find the right location where the problem persists and project that as the creative. We found real locations and decided to use real people suffering from the crisis. In an attempt to create a buzz-worthy piece of work, we captured wells where the water was almost negligible and the daily struggle of the people living in the nearby areas. We shot from a 40 feet high crane in order to capture the image of villagers around a dry well seemingly forming the shape of an empty bucket.

The posters - released nationwide on World Water Day - created awareness of the problem of acute water shortage faced by 300 million Indians on a daily basis. The poster image was widely shared on social media by influential and millennials. People took note of how RIN can help save water and became aware of how each person is capable of making a difference with a simple bar of Rin. It presented the brand as an answer to a serious environmental problem in the country - thus increasing its credibility.

Global multinationals are regarded with some suspicion and scepticism in India. The feeling is that they are here to exploit the nation's resources. This innovation by Unilever actually helps to save a very precious resource - water.
So we wanted to present that fact to Indians in the starkest possible way.

71% Indians believe they have access to news from sources they trust: Survey
16 hours ago

The best companies survived Covid on the back of brand advocates: John Hall
23 hours ago

In future, mktg will focus less on ad, more on customer-focused content: Michael Brenner
23 hours ago

Why micro-influencer marketing is becoming mainstream
4 days ago

Sony gets 15 sponsors on board for India-Australia series; 70-75% inventory sold
4 days ago