SPN will launch Sony Marathi channel on August 19. The Marathi segment contributes 4% to the overall TV revenue and industry experts estimate that the top-line is likely to grow by 10-15%

Sony Pictures Network (SPN) is all set to become the latest entrant in the Marathi broadcast space. The network will launch Sony Marathi channel on August 19. This is Sony’s second move in the buzzing regional entertainment space, after it launched Bengali channel Sony Aath in 2009. SPN has unveiled the tagline of the channel, ‘Vinuya Atut Nati’, and is already airing the promos of three shows -- ‘Saare Tuzhyach Sathi’, ‘Julta Julta Jultay Ki’ and ‘Hum Bane Tum Bane’. 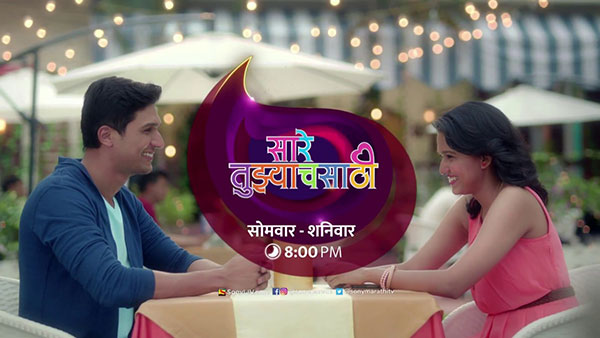 The Marathi segment (GEC and movies) has been receiving quite a lot attention from advertisers of late. After Tamil and Telegu, advertisers are now banking on this segment, which contributes 4 per cent (Rs 800-1,000 crore) to the overall TV revenue, according to Pitch Madison Advertising Report 2018. Industry experts estimate that the top-line is likely to grow by 10-15 per cent.

Coming to advertising, popular Marathi shows of the recent time have attracted some of the big sponsors. Zee Marathi’s hits ‘Mazhya Navryachi Bayko’(MNB) and ‘Chala Hawa Yeu Dya’(CHYD) have sponsors such as cosmetic brand Dazzler Eterna (MNB), jeevansathi.com(MNB) and Good Knight(CHYD). Colors Marathi’s much-hyped Bigg Boss Marathi, which claimed to be the costliest show in the category, had Dabur Red Paste as presenting sponsor and was powered by Rin, Dabur Vatika Hair Oil and Gemini Cooking Oil. 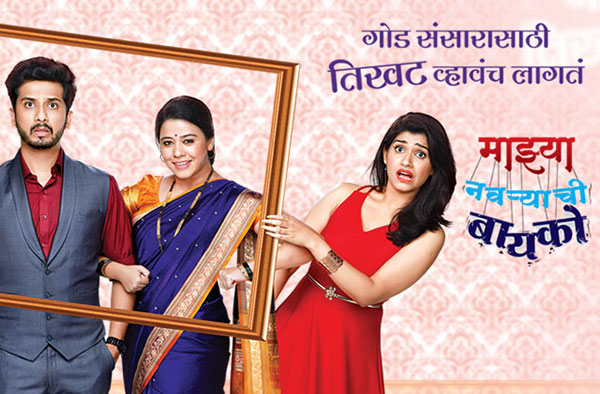 The category has also seen an expansion in the production of original content on channels such as Zee Marathi, Zee Yuva, Colors Marathi and Star Pravah.

Bavesh Janavlekar, Business Head - Senior Vice President, youth/ movie channels (Marathi) Zee Network, thinks the space is currently highly competitive. “Everyone is pulling up their socks and putting their best foot forward. This leads to excellence in programming in terms of fiction,” he says.

Even for marketers like Amit Tiwari, Vice President Marketing, Havells India, the segment is a goldmine waiting to be tapped. “It’s one of those areas which has not been looked upon seriously for quite some time. It has a huge potential for vernacular content just like the way you see in Andhra Pradesh and Karnataka,” he said.

With Maharashtra being one of the richest states, FMCGs are increasingly interested in putting their money here. Incidentally, Sun TV Network also intends to enter Marathi market.

As Maharashtra is one of the key markets for Hindi GECs, there has always been a huge overlap of Hindi and Marathi viewership. But this overlap has been shrinking for some time now due to the increase in Marathi original content. As a result, there has been an increase in the amount of time spent by Marathi viewer with this content. This time spent on Marathi genres is slowly cannabalising into the Hindi viewership. Nilesh Mayekar, Business Head, Zee Marathi, says, “More and more Marathi content is being consumed.” 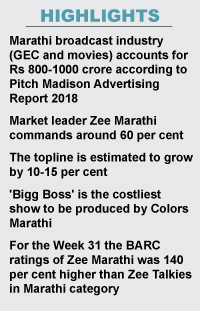 According to TV rating agency BARC India, the number of TV owning individuals in Maharashtra/Goa (2+) has gone up by 7 per cent, from 95 million to 102 million, with the universe update in Week 29 from Week 22-30. The average weekly impressions garnered by Marathi GEC from Week 22-28 were 604 million. With the updated universe, the average viewership recorded for Week 29-30 was 678 million, a growth of 12 per cent.

Janavlekar explains, “In the last six to nine months, major Marathi GECs have grown. The growth is driven not by more people watching but the increasing time spent. Even though the reach is increasing, the growth is driven by time spent.”
He explains giving an example of Zee Yuva’s launch in 2016. “The general thought was that it will cannibalise into other channels. But all other channels have also grown. An interesting phenomena in terms of Zee Yuva is that the overall pie has grown. Is it coincidence or content disruption?”

Rao attributes this gap to distribution and Zee Marathi’s content. He says, “Content and its strong lineage of properties such as Gaurav Puraskar has built a robust appeal for it among the masses over the years.”

This widening difference can be seen either as a bottleneck or as an opportunity. SPN definitely has chosen the second option. Rohit Gupta, President, Network Sales and International Business, SPN, recently mentioned to an English daily that with their content, they are aiming to grab the middle position.

The launch of Sony Marathi is likely to expand the genre as it happened with Zee Yuva in 2016. However, for media planners like Rao, it’s too early to say that. He explains, “The appeal of Sony Marathi and its content is expected to be more towards the affluent audiences of Maharashtra, a space not fully occupied by other players. It might be too early to say anything, but would be interesting to see how it pans out.”
For Tiwari, it all depends on the kind of content being served and most importantly, if it matches the audience’s expectation. “Sony’s entrance should expand the genre. The critical thing for any channel to succeed in the regional space is the content that they are trying to serve to the audience.”

Janavlekar points out that this move will lead to “cannibalisation and growth in viewership pie.”

“If consistency of delivery in programming continues, the growth will keep happening,” he adds.

I am requesting the ad fraternity to stand by us: Arnab Goswami
10 hours ago

I am requesting the ad fraternity to stand by us: Arnab Goswami
10 hours ago

Don’t be opportunistic, build trust: Madison Report on advertising during COVID-19
17 hours ago

COVID-19: No newspapers to be delivered in Mumbai today
6 days ago

Social media steps up against COVID-19 misinformation
3 days ago

COVID-19 update: No circulation of newspapers in Mumbai & around for next 2 days
6 days ago

DD classics Ramayan & Mahabharat to make a comeback on TV?
3 days ago

EVERY HOUSEHOLD WATCHED 5 HOURS, 11 MINUTES OF TV EVERY DAY: BARC REPORT
5 days ago

WE HAVE ACTUALLY HELD BACK SOME OF OUR COMMUNICATION: ABHINAV IYER, MUTHOOT FINANCE
5 days ago

WE EXPECT TO SEE A HEALTHY, DOUBLE DIGIT GROWTH FOR SPORTS IN 2020: VINIT KARNIK
5 days ago