#MeToo allegations: Kwan asks Anirban Blah to 'step aside' from his duties

Kwan has asked Founder Anirban Blah to “step aside from his duties, activities and responsibilities” at Kwan, its subsidiaries and affiliates with immediate effect after sexual harassment allegations surfaced against him under the #MeToo campaign.

The decision followed a report published in an English daily on October 16. Kwan, in a statement issued after the report, stated, “We fully support the #MeToo movement and deprecate and condemn those who have exploited women in any form.” 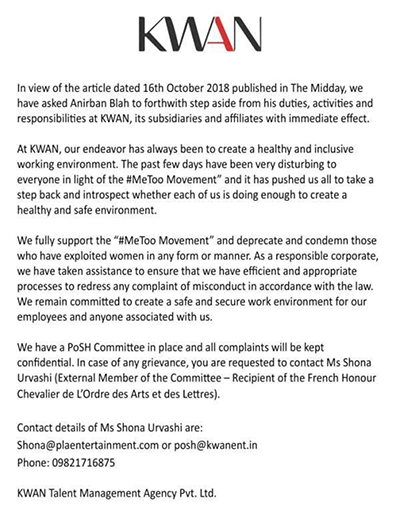 Will 2021 be the year of cinema entertainment?
55 minutes ago

D-day: Gear up for 20th edition of power-packed e4m Conclave today
56 minutes ago

Publishers seek waiver of customs duty on newsprint
1 hour ago