Nasha Premiere Nights is a flagship property of Radio Nasha where the magic of classics of 70s, 80s, and 90s is brought back to the silver screen. In both Delhi and Mumbai, in the last two years, films like ‘Qayamat Se Qayamat Tak’, ‘Silsila’, ‘Dilwale Dulhania Le Jayenge’, ‘Disco Dancer’, ‘Don’, ‘Maine Pyar Kiya’ and many others have been screened.

On 29th September 2018 Radio Nasha, in association with National Film Development Corporation, screened the cult classic ‘Jaane Bhi Do Yaaro’ to celebrate 35 years of the movie and pay tribute to Kundan Shah and Om Puri. The screening was a grand affair and was attended by cast of the movie - Satish Kaushik, Satish Shah, Rajesh Puri, Sudhir Mishra, wives of late Om Puri and Kundan Shah, and the crew. 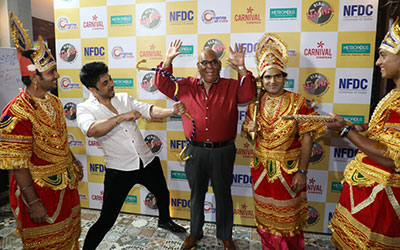 The screening was preceded by a red carpet interaction with RJ Anmol who hosts the show ‘Ek Main Aur Ek Tu’. After the screening, the complete cast interacted with Radio Nasha and spoke to RJ Rohini who hosts Jhakkas Mornings about their special moments from the film and fondly shared behind the screen stories.

On this occasion, Harshad Jain, CEO – Radio and Entertainment, HT Media Ltd., said, “With Radio Nasha our endeavor to always to take our listeners for a nostalgic trip down the memory lane. Nasha Premier Nights is our initiative where we screen a classic of 70s, 80s and 90s in a large auditorium and reminisce the nostalgia with the listeners, cast and crew. Jaane Bhi Do Yaaro is a cult classic and with the screening we are sure that we gave our listeners a ‘money can’t buy’ experience. We are thrilled at the response we received from the listeners, sponsors and the star cast of the movie, and stand committed to present many more “Cool Retro” experiences. ”

Agency leaders should get out of the board room & make human connections: Per Pedersen
8 hours ago