According to the projection, the single largest party, BJP alone will get 202 seats as per NewsX Neta Exit Polls data, while Congress will be getting 107 seats

The political battle for power in India drew to a close after the last vote was cast in the final phase of the General Election. NewsX Neta Exit Polls for general election gave a clear indication of the electoral trends across the country. Conducted by iTV Network’s NewsX, India’s leading English national news channel in association with the Neta App, the Exit Poll results of the NewsX Neta indicate that NDA is projected to win 242 seats, while UPA is expected to win 164 seats, and Other(s) will get 136 seats out of the 542 seats in Lok Sabha seats.

According to the projection, the single largest party, BJP alone will get 202 seats as per NewsX Neta Exit Polls data while Congress will be getting 107 seats. 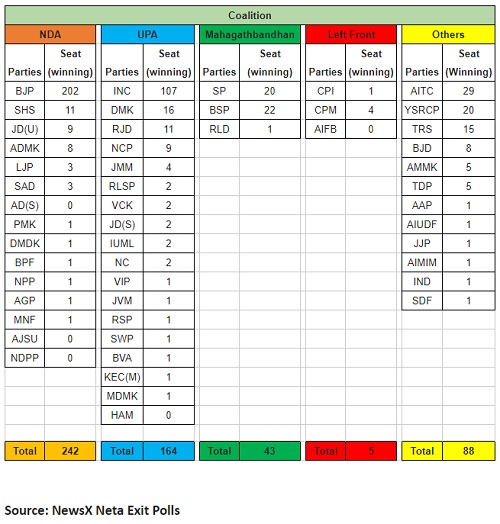 To his clients, Goutam was much more than an advertising man: Lloyd Mathias

To his clients, Goutam was much more than an advertising man: Lloyd Mathias
43 minutes ago

No industry matter was ever settled without Goutam’s advice: Pradeep Guha, 9X Media
1 hour ago

The COVID-19 Code: How digital agencies are attaining the ‘work-home’ balance
44 minutes ago

Are GECs set to see a surge in viewership in COVID-19 Week 2?
1 hour ago

Ad world pays tribute to Goutam Rakshit: The man behind the iconic Onida Devil
15 hours ago

Rewind: When a HelpAge India ad showed a character facing social isolation for decades
1 hour ago

I am requesting the ad fraternity to stand by us: Arnab Goswami
5 days ago

Social media steps up against COVID-19 misinformation
1 week ago

DD classics Ramayan & Mahabharat to make a comeback on TV?
1 week ago

CREATIVE AGENCIES: PITCHES, FELLOWSHIP AND ADVERTISING IN THE TIMES OF COVID-19
1 day ago

DIGITAL: THE LESSER BRUNT OF AD SPEND CUTS
1 day ago

OTT PLATFORMS: ALL OUT TO WOO THE AUDIENCE
1 day ago

PR WILL DO BETTER THAN MOST OTHER MARCOM DISCIPLINES: MADAN BAHAL, ADFACTORS PR
1 day ago