With #IAmAChangemaker campaign for HP ZBook workstations, HP talks about unboxing and unlocking creativity in India

In a bid to defy norms and challenge conventions, HP India has started the #IAmAChangemaker campaign, which was announced at the launch of its revolutionary new series of new, sixth generation HP ZBook workstations in India.

The revolutionary workstations are designed for artists and creative fraternity who value nothing more than the freedom to express their craft and creativity.

#IAmAChangemaker aims to reach out to all the creative minds as HP urges users to think like ‘there is no box, but instead go a step further and question the existence of the box itself’. It’s all about unboxing and unlocking creativity in India through Z by HP, designed for creators.

This new campaign by HP India was unveiled by filmmaker Zoya Akhtar in the presence of Neelima Burra, Country Marketing Director, HP India. Akhtar was roped in as the face of the campaign as she is known for transforming the Indian film industry with her extraordinary ideas and zeal to create cinema that is genuinely unique and truly disruptive.

Speaking about her association with the #IAmAChangemaker campaign, Akhtar said, “I liked the intent. This intent was something that moved me. The core idea was about the imagination running free, they were talking about that there is no box and I find it very inspiring.”

“Also, they want to talk to creators who have just started out. They want to cater to the nascent art forms and it was interesting and that is why I’m on board. Also these technological innovations help to promote art and I’m always ready to support that,” she added. 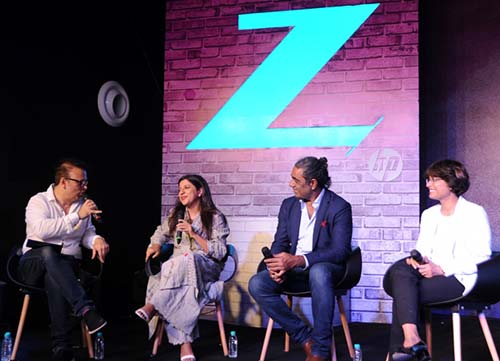 With this new campaign, HP invites change makers from across India to come together and become a part of a larger community that is bound with its shared love and passion for art and creativity.

Sharing her thoughts about the new campaign and the new offering, Burra said: “We, at HP, have been focusing on injecting emotional connections and more of a focus on millennials into the marketing initiatives. There has never been a more important time for creativity. In the experience age, customers expect curated, relevant and hyper-targeted experiences.”

“In this age, people are looking for authentic experiences. The #IAmAChangemaker campaign was the result of the social listening that we were doing and when we were listening to the artists and the community at large, we realised that the biggest pressure point for all of them is how do we do things differently, and how do I think out of the box and that was the biggest inspiration behind this campaign,” Burra added.

Opportunities on the menu for OOH as restaurants set to re-open in Mumbai?
17 hours ago

Advertising in news channels can double if they attract quality eyeballs: Ashish Bhasin
17 hours ago