IMPACT from the exchange4media Group launches the first edition of its ‘40 Under Forty’ list to recognise extraordinary achievers who are 40 years of age and below in the Indian Media, Marketing and Advertising industry. Below are the remainder of the list of entrepreneurs revealing the deep motivators and personal qualities that drove them to make their big idea a reality. 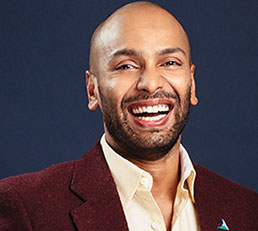 Banerjea says that over the last two years, Zeotap has helped hundreds of brands reach their desired audiences and extract more value from their advertising efforts. A campaign that illustrates this was done by a leading e-commerce company and its media agency was looking to increase sales and the most dependable way to reach online shoppers in the 22-40 age range. Says Banerjea, “They selected Zeotap as their partner with the confidence that ID-verified data from the largest Indian telecom operators would ensure high on-target reach (OTR), leading to less impression wastage and better return on advertising spend (ROAS). The results were overwhelming: targeted creatives leveraging Zeotap audience data increased campaign efficiency by over 170 per cent compared to previous campaigns.” What has him excited now is Zeotap’s new Connect product, an on-boarding tool that enables brands to “activate” hitherto dormant offline CRMs in the mobile realm by matching traditional attributes such as phone numbers and email addresses with digital identifiers, in an entirely pseudonymized, privacy-compliant manner.

Banerjea is a successful serial entrepreneur who contributed to two successful exits: Fyber, a monetisation platform for mobile publishers and Moboqo, a premium mobile advertising network. Besides being an active angel investor in domains ranging from advertising technology to computer vision to AI-powered CRMs, he recently co-founded innovative Indian feminine care brand, Nua.

Success Mantra
Evolution is key to success, says Banerjea. “The big challenge for most marketers globally has been to successfully reshape their internal processes in order to comply with the new European Data Protection Regulation (GDPR). This new law places a number of controls on data collection, processing and usage, particularly for the purposes of digital marketing activities. Long term, with AI, many marketing activities conducted manually today will be handled by machines. As a result, marketing roles for humans will have to evolve and learn how to complement these technologies by bringing in unique human attributes such as perception, creativity and critical thought. Additionally, as virtual assistants like Amazon Alexa gain penetration into consumers’ phones and homes, purchases will be made through the recommendations of these agents. This power shift will leave less room for traditional marketing techniques and marketers will have to evolve.” 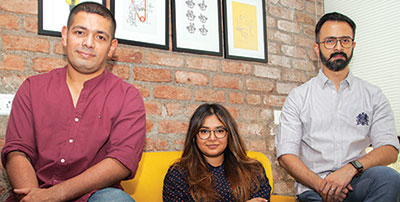 In 2009, when the world was hit by recession, college batchmates Varun Duggirala and Rohit Raj decided to quit their jobs at Channel V, and set up The Glitch, at a time when nothing much was happening in the digital space. Starting off as a production house for the web, the company evolved into an innovation company for the digital space, then to a digital agency and finally to its current form, a 360-degree integrated communications company. Along the way, Pooja Jauhari came on board as CEO, post a meeting at a marketing conference. With the focus on providing end-to-end solutions for its clients, the creative digital agency, which the founders call “the Swiss Army knife of agencies”, was acquired by global advertising giant WPP and now operates as an independent brand under GroupM.

Today, the agency’s impressive portfolio of clients including Netflix, Nokia, HUL, LinkedIn, PayU, Star India and Marico, among many other international brands from the entertainment, beauty and FMCG sectors.

The Glitch also expanded its content offering by introducing Flux, its content arm, to help brands develop agile content solutions. A big challenge for the team is to balance consumer engagement and meet the brands’ business goals and this drives them to constantly innovate and evolve. Duggirala heads the company’s content as Content Chief while Raj leads as the Creative Chief.

The 265-member strong agency has offices in Mumbai and Delhi currently, and as for the future, it’s eyeing the Bangalore market for an expansion soon along with plans to enter two international markets.

Success Mantra
At The Glitch, not just the founders, but the entire team is considered ‘family’, and that makes working together all that more special and fun. As for what is key to their success, here’s what the founders say:
Pooja Jauhari: “Work life balance drives productivity all around.”
Rohit Raj: “Make mistakes.”
Varun Duggirala: “Always have stupid ideas and stay paranoid.” 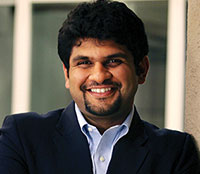 Just before Anant Goenka joined the Indian Express Group, he received a piece of advice from a renowned Indian businessman: ‘Kabhi mat bhoolna ki tum lambe race ke ghode ho’. This sound advice has stayed with him as he chose not to rest on the laurels of the past, but look ahead and build the legacy media group’s fledgling digital business.

Following the legacy of Ramnath Goenka, a man who played a noteworthy role in shaping modern India, was no mean task, but Goenka is recognised for converting the editorial and business mindset of a conventional newspaper to a modern, digitally adaptive one that continues to champion its 85-year old history of free speech and courageous journalism.

Over the past five years, the group’s digital reach has grown from four million unique visitors to 70 million unique visitors (Source : ComScore) a month from around the world, becoming India’s second largest digital news group. Its flagship portal www.indianexpress.com is ranked by Newswhip as one of the world’s 25 most engaged websites on Facebook. The group’s Loksatta.com is one of India’s largest Marathi websites and the Hindi news website jansatta.com and English business news website Financialexpress.com are highly rated. On the back of the successful launch of ieMalayalam.com in December 2016, the group built original on-ground teams in Chennai and Kolkata through 2017 to roll out ieTamil.com and ieBangla.com. The focus on increasing penetration in regional languages increased the group's reach by 25 million unique users per month.

Goenka says his “best career-changing decisions are to do with the best hires” he has done and he attributes his success to implementing the lessons he learnt from his father at an early age in hiring and retaining the right talent. He adds that the key to success is to find a cause that inspires you, not a business case.

Goenka frequently writes in The Indian Express and often hosts the popular Express Adda. Looking ahead to the next decade, his goal is clear: “Expanding the reach of Ramnath Goenka's legacy of fearless and credible journalism globally, through technology as a key enabler.”

Success Mantra
For Goenka, success is all about credibility. “The product lifespan of any business in the digital era is very limited. Vox, Buzzfeed, Huffpost - all the best, most admirable digital news brands have either changed ownership or have shown signs of dropping valuation and high cash burns. The only long term sustainable business case that there is, is one of credibility. Our bet for the future is to take our highly credible journalism to multiple regions in multiple languages on multiple formats. And today, with a group reach of 120 million unique visitors (Source : Google Analytics) a month, across the world in six languages, we are very humbled by hundreds of digital advertisers that have put faith in us and encouraged us to continue to combine our journalism with the potential of the digital medium.”

The entrepreneurial bug bit Vinay Singhal and Shashank Vaishnav while they were still pursuing their B.Tech, Computer Science course in Chennai. The duo founded Vatsana Technologies in their hostel room before moving base to Indore. What followed was failure and core learning, and more importantly, acquiring a deep understanding of social media and its workings. Eventually, in September 2014, WittyFeed.com took shape under the aegis of Vatsana Technologies. Recalling the early days, Singhal and Vaishnav say, “We strongly believe that success and failure are vital in the life of a serious entrepreneur. Before tasting the sweet fruit of success with WittyFeed, we have had our own bitter share of failures. But the key is to keep going, but with a broader perspective. Thus, with such an approach, all anticipated guesses turn into fully-formed decisions.”

Vinay Singhal, CEO, advises entrepreneurs to be serial entrepreneurs rather than parallel entrepreneurs and believes in being a change agent. Shashank Vaishnav, CCO, practises sirshasana or headstand when he is stuck for ideas on a crucial business strategy. And Praveen Singhal, youngest of the trio, goes by the moniker Viral King. He is the man who takes care of the creativity, virality and marketing. He is a data analyst who is responsible for studying the audience behaviour to help maintain a better relation with his audience. He is credited as the person who has helped WittyFeed establish a creative platform that helped in content going viral.

Speaking of virality, a campaign which the team is proud of is one done for the athletic footwear and apparel company, Reebok. In the campaign, #GirlsDon’tFight, the brand tried to uplift women and on the back of women’s empowerment, it connected with the TG and delivered. As of today, WittyFeed is a major viral content company in terms of traffic generation and is currently valued at $30 million.

Success Mantra
For the WittyFeed founders, video was the route to success. “The idea to create varied form of content through the medium of video, especially the idea of creating sketch videos worked. A series of videos centered on a single theme is always a good idea to encourage discussions on the subject, and often, through varied perspectives. Since we are dealing with a heterogeneous audience, their feedback helps us understand both our own content and our audiences much better,” they say.

Goafest 2020: Meet the power-packed Jury for ‘The Red Abby’
3 hours ago