From Julahaa Sarees to Amrapali Jewels, brands that are part of Manikarnika’s entourage

Kangana Ranaut’s period drama was released on 3,700 screens in 50 countries worldwide in Hindi, Tamil and Telugu

Kangana Ranaut’s period drama Manikarnika: The Queen of Jhansi released on January 25 and is receiving positive response from audience, raking in huge numbers at the box office. The movie, made on a budget of Rs 125 crore, has been co-directed by Kangana along with director Krish. The film has been making headlines much before its release because of several controversies associated with it.

The characters in the period drama are seen wearing luxe traditional attires and jewellery. Neeta Lulla has designed Ranaut’s wardrobe. Amrapali Jewellers- the heritage jeweller from Jaipur, has been roped in to design the jewellery. According reports, the jeweller has created an expansive collection of 955 pieces in over 700 different styles for the film.

Take a look at the various brands associated with the movie:

The Manikarnika Collection is a tribute to the Maratha grandeur and the courage of the Queen of Jhansi. Each piece showcases timeless ethnic styles and traditional craftsmanship of a bygone era. Find the collection in all Amrapali Jewels stores and online at www.tribeamrapali.com #AmrapaliJewels #Amrapali #Jewelery #Manikarnika #QueenOfJhansi #KanganaRanaut #earrings #necklace #rings

Paytm is the ticketing partner for the movie Inox is the multiplex partner for the movie 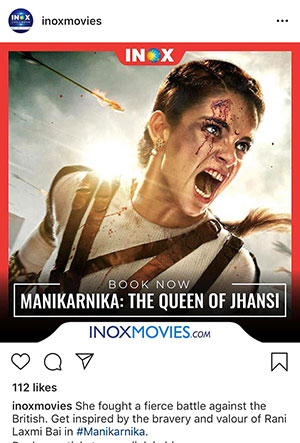 The cable TV partner for the movie is Hathway

Anti-Piracy partner of the movie is AiPlex

We have positively disrupted our own segment: Byju Raveendran
2 days ago