The two-day auction will mark the first event for Season VI, with the franchises coming together to build their teams.

Riding on the back of 5 phenomenal seasons, VIVO Pro Kabaddi announces the dates for the upcoming Season VI Player Auctions. The auctions, scheduled to take place on the 30th and 31st of May 2018 in Mumbai, will witness teams strategizing to build their strongest teams. A total of 422 players will be drafted into the auction pool of which 58 are Overseas players and 87 are players from the Future Kabaddi Heroes Programme (FKH), a nationwide talent scouting programme. The auctions will witness player representation from 14 other countries including Iran, Bangladesh, Japan, Kenya, Republic of Korea, Malaysia, Sri Lanka.

The two-day auction will mark the first event for Season VI, with the franchises coming together to build their teams. Out of the 12 franchises, 9 have chosen their Elite Retained Players and the remaining 3 will construct their teams from scratch.

The League has worked consistently to set new benchmarks and with the expansion in format and franchises in its previous season, is now India’s biggest domestic sporting league. Continuing the spirit of consistent evolution, the League has introduced the concept of “Final Bid Match”, whereby the franchises shall be entitled to match the final bid made by another franchise, for one or at most two players from its Season V squad, in accordance with the guidelines set in the Player Policy.

Anupam Goswami, League Commissioner, VIVO Pro Kabaddi said “The Player Auction for VIVO Pro Kabaddi Season VI will be the culmination of the player policy for the upcoming Season, which has been designed for long term association as well as even redistribution of athletic talent. It epitomises the continuing advancement in VIVO Pro Kabaddi for quality of competition, along with the right balance between compensation to athletes and affordability for their employers”.

A spokesperson from the AKFI said “The League has consistently set high standards in terms of quality of play, policy and growth of the sport. There has been continuous effort towards strengthening the Kabaddi ecosystem and providing significant opportunity for aspiring talent to grow and develop. The Season VI auctions will be yet another milestone in the way the federation has worked with Star, Mashal, and the franchises to improve the competitive standards of the League. We are unwavering in our efforts to grow VIVO Pro Kabaddi, as well as Kabaddi as a sport”. 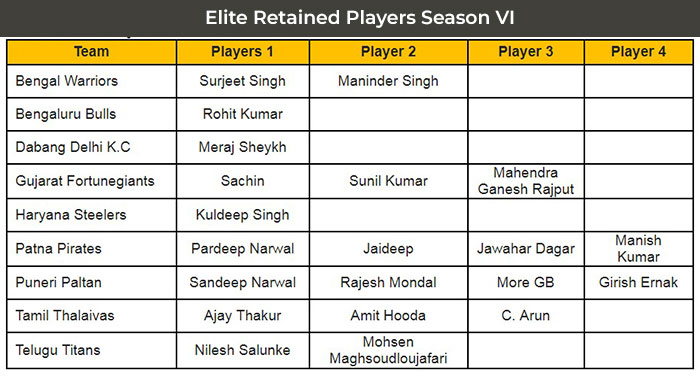 Mahendra Singh Dhoni gets a unique tribute from Sunfeast YiPPee! on his birthday
4 hours ago

Discovery as a brand stands for trust & credibility across India: Issac John
6 hours ago