Pawan Sarda, Group Head, Digital, Future Group, tells us all about the role that digital marketing plays in bringing consumers into stores

Future Group big boss Kishore Biyani is sure about one thing: offline retail is not going anywhere, it is merely evolving. In keeping that evolution Biyani believes in, Big Bazaar the retail chain brand from the Future Group stable uses every opportunity possible to make first-contact with consumers online and then persuades them to visit one of the many offline Big Bazaar stores.

Pawan Sarda, Group Head, Digital, Future Group says that Big Bazaar’s online to offline strategy is very crucial to the brand. Unlike online brands for whom closing the loop online is very easy, offline brands like Big Bazaar tend to struggle with converting the online intent to buy into an offline store visit. 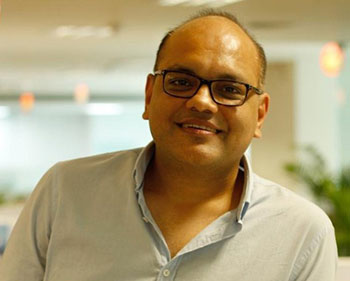 To initiate first contact Big Bazaar takes the mobile route primarily. “We don’t look at the digital world, we look at the mobile world. As a retail company we want to be on mobiles, whether it is engaging with our audience or giving them options to buy,” he says.

Sarda says that the team learnt that people don't want good morning good night messages from brands; they want to hear about discounts and offers on products from the retailer. Big Bazaar employs this learning in every piece of communication it creates for the online and offline mediums. Big Bazaar’s communication philosophy has been effective resulting in “21 per cent of our consumers say that they have engaged or seen our digital communication,” said Sarda.
Big Bazaar’s online to offline strategy is driven by couponing. The retailer incentivises every interaction that a consumer may have with the brand online, thus giving them that extra nudge to head into a store. We wonder for how long this couponing strategy might work for the brand, Sarda assures, “it makes sense for us.”

He adds that in a world where there is no unified digital measurement metric, the store walk-ins are his singular metric. Sarda’s digital marketing efforts are under great scrutiny. Unlike many other advertisers for whom digital is 15 per cent of the media mix, Big Bazaar has a team dedicated to work just on digital marketing.

The other great teacher for Sarda has been Bollywood and its use of digital to break a marketing campaign. “We use Bollywood style of marketing to create snacky content and create anticipation for what is to come,” he says. So Sarda first breaks the campaign on digital, then uses television for reach, and finally print for conversion.

Sarda says simple, logic driven innovative campaigns and content go a long way in making the desired impact.
Heres's how Big Bazaar has been cracking the online to offline strategy:

24 Facebook Live Shoppertainment
While Big Bazaar is not big on pure-play content marketing, it has content plan that is also tuned to bring online shoppers offline. For the second time Big Bazaar is leveraging Facebook live to engage with audiences. From Krushna Abishek, Gaurav Gera, Arjun Rampal to Shibani Dandekar an array of celebrities are creating unscripted live curated content.

For the last one year, Big Bazaar has been using Smart Search to convert intent to purchase offline. Big Bazaar gives exclusive offers to anyone who searches for Big Bazaar on Google during the first weekend of the month. “We saw 38-40 per cent redemption of the coupons,” said Sarda. The Big Bazaar stores also saw over one lakh walk-ins.

For the Mahabachat Sale that is currently going on, Big Bazaar has launched two games that can be played within the Facebook environment. Scoring points on the games come with the perks of coupons and discounts on shopping at the store during Mahabachat.

Fashion styles that are introduced on the ramp define the look for a season in the world of haute couture. Taking off from there, in the summer of 2018 Big Bazaar’s fashion arm hosted Watch Now Buy Now, a fashion show that allowed customers to buy featured clothing in real time. Discounts were offered to those who were first to register for the event.

With a digital only campaign that comprised GIFs, videos and other social media posts, Big Bazaar built the shorts category and drove up sales momentum for the category. Sarda points out, there were no offers this time. Simply by creating hype and intrigue, the retailer sold around one lakh shorts during the first World Shorts Day. With the sales during the first edition going through the roof, Big Bazaar returned with World Shorts Day for the second time in 2018.

E-commerce
Big Bazaar has taken the omni-channel approach this Mahabachat season. This is part of the retailer's strategy to be available where ever the consumer is, be that offline or online.

digital e4m-infobip webinar: Digital will be the flag bearer for retail in 2021
2 days ago