Organised at a pan-India level, a lot of employees of top media agencies took part in this one-of-a-kind campaign

While the General Elections 2019 is nearing completion, Zee Media’s interactive poll campaign around its show "Ab Ki Baar Kiski Sarkar" also gains momentum. It was carried out at top media agencies across the country. The campaign was conducted on April 22 and went on till May 2. The first few agencies where the activation took place saw an overwhelming response. It was successfully carried out at Delhi, Mumbai, Kolkata and Bangalore. 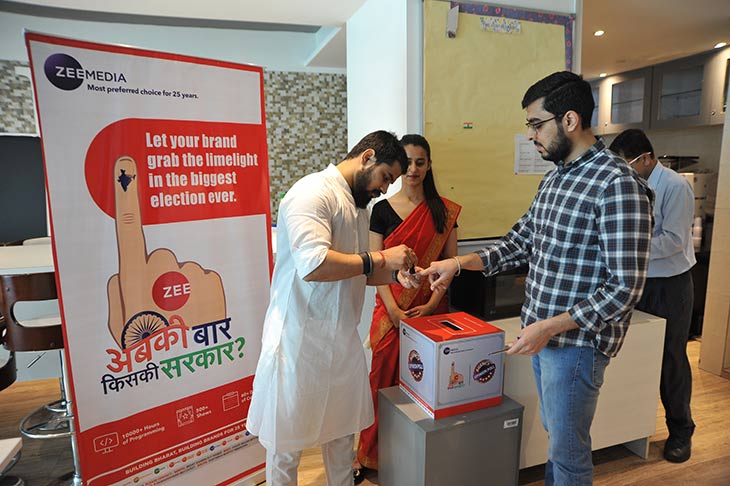 It all began with Madison, Delhi on April 22 which saw a great number of employees participating. 73% of them took part in the initiative making it a huge success. The turnout at Havas Media, Delhi the next day, saw almost equal response with 71.42% employees participating. On April 24, the same activity was conducted in Lodestar and Initiative in Delhi, Prachar Communication in Mumbai, Madison in Bangalore and Ad Merchant in Kolkata. Lodestar saw 66% participation in Delhi, Prachar Communication witnessed 39%, Madison Bangalore saw a whopping 81% whereas Ad Merchant in Kolkata saw 100% employees partaking in the activity. It definitely was heartening to see young working professionals of these cities actively participating in the initiative.

Buoyed by the tremendous response, the activity was scaled up and was conducted at many cities simultaneously on April 25. Havas Media in Mumbai took part in the activity which saw a 48% turnout. In Delhi, the initiative took place at the offices of GroupM and OMD affiliates and saw a fantastic turnout. Wavemaker saw 72% participation, Mediacom saw 89% participation and Mindshare, Essence and M Plan together saw a turnout of 68%.

In Mumbai on the same day, Mindshare and Fulcrum saw 23% active participation while Essence and Wavemaker saw 35% and Redfuse and Wavemaker together saw a turnout of 59%. Mediacom and M6 took to the activity in a big way and recorded 60% participation. In Bangalore and Kolkata, GroupM offices saw the activity being carried out with great success. In Kolkata, employees of the agencies took an active interest in the poll campaign and registered a massive turnout of 82%! Bangalore saw 65% engagement at the GroupM office. Clearly, the agencies had taken to the activity wholeheartedly as it was well-timed; as the elections are on and "Ab Ki Baar Kiski Sarkar" gave them a platform to voice their opinions.

On April 26, the same activity was carried out at Starcom and ZO in Delhi, Lodestar in Mumbai and Initiative in Kolkata. All these venues saw an outstanding turnout of over 80% which makes this campaign a super success.

Now coming to the winners, they were picked through a lucky draw. The fortunate ones from Delhi are Praveen Verma from Madison, Ravi Kumar from Havas Media, G.Venkataramani from Lodestar. Bharat Budal from GroupM Delhi and M Shiva Prasad from Madison, Bangalore were the chosen ones as well. The winners walked away with Saregama Caravan! 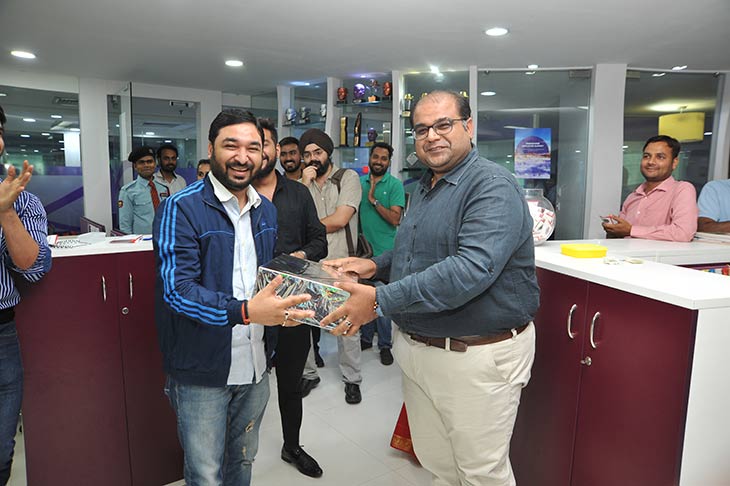 One of the winners, Bharat Budal from GroupM Delhi, receives his prize

The “Ab Ki Baar Kiski Sarkar” campaign, conceptualized and executed by Zee Media, is done to bring the working young Indians closer to the process of choosing the right government and to make democracy a success. The employees of the top media agencies answered five questions and a lucky draw decided a winner from each of them.

This poll campaign around "Ab Ki Baar Kiski Sarkar" show is aligned with Zee Media’s promise of “BUILDING BHARAT, BUILDING BRANDS FOR 25 YEARS”. This activity was conducted to understand the sentiments of the voters from these agencies and what they are looking for, from the new government. It is ZEE Media’s move to make the working Indian youth aware of the process of selecting the right person for the position of power because their future depends on it.

But wait, there’s more to this campaign than just that. Watch this space to know how other agencies fared during this activity and who else walked away with the grand prize.

Assam gets own 24/7 Doordarshan channel
17 hours ago

Assam gets own 24/7 Doordarshan channel
17 hours ago

IMPACT’s 50 Most Influential Women List, 2020 to be unveiled tomorrow at 5 pm
1 day ago

Return of advertisers brings cheer to Print
6 days ago