82% millennials feel their childhood was better than the present generation's: YouGov

In a YouGov study, a considerable number of millennial respondents who were born between 1981 and 1996 said they want to bring back their favourite superhero and mythology shows from the 90s

More than eight in ten (82%) millennials said they feel their childhood was better than that of the present generation, YouGov’s new research reveals.

Much before the likes of Netflix and Amazon entered our lives, Doordarshan was our one-stop destination for entertainment, we crooned indie-pop chartbusters and smoked sweet cigarettes. On the occasion of Children’s Day, YouGov asked millennial respondents- who were born between 1981 and 1996, what they would like to bring back from their growing up years.

A considerable number of millennials want to bring back their favourite superhero and mythology shows from the 90s. Shaktimaan tops the list with both millennial men and women saying they want to see him revived in some form today (51% and 46%, respectively). 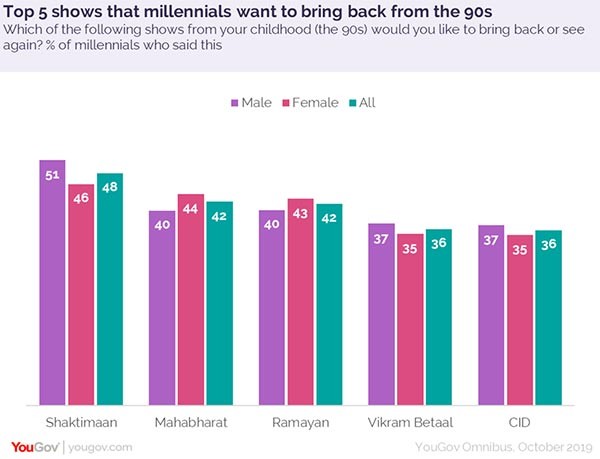 After superheroes, mythology is a genre that seems to be dear to them, with 42% millennials saying they want to bring back ‘Mahabharat’ and ‘Ramayan’. Even though there were versions of these hit mythological shows in the later years, millennials are in awe of the original shows that defined Sunday TV-viewing for them. Investigative and fantasy shows such as Vikram Betaal and CID are also desired by many (36% for each) to be brought back today in some form.

Apart from TV, comics and storybooks occupied a major part of the millennial childhood, filling the void of long train journeys and the stretch of lazy afternoons with colourful characters.

Half of the millennials (51%) said they enjoyed reading Akbar-Birbal in their childhood. Many also loved reading Tenali Raman (43%), Panchtantra (43%), Chacha Chowdhary (42%) and Vikram Betaal (41%). The 90s was a golden period for content of all forms and witnessed the era of indie-pop music in India.

When asked about which indie-pop band or artist would they like to bring back, two in five (40%) took Falguni Pathak’s name, with a higher number of females saying this as compared to men (47% vs 31%). A third (34%) want Lucky Ali to come out of hibernation and re-create his magic. Three in ten want Pankaj Udhas (31%), Alisha Chinoy (28%) and Daler Mehndi (27%) to return with their original music videos.

Another memory trigger for the 90s were the toffees and candies that were an indispensable part of birthday celebrations in schools. Half of the Indian millennials (51%) want Coffee Bite to make a comeback in the stores, followed by Eclairs (46%) and Melody (43%).

Interestingly, regions in India seem to be split in their preferences for sweets and candies. Although the majority wants to bring back Coffee Bite, the demand for Paan Pasand is the highest in North and West India (42% each), while Kismi Bar is most popular in West India (52%), amongst all other regions.

There is no woman more powerful than one who stands for integrity: Anuja Choudhary, Wizspk
3 hours ago

62% consumers want brands to continue to talk to them through COVID-19 crisis: Mark Read
2 hours ago

During the epidemic, brands must look at how they can provide succour: N Chandramouli
2 hours ago

I am requesting the ad fraternity to stand by us: Arnab Goswami
6 days ago

Anchor Mugdha Mishra moves on from CNBC Awaaz
2 days ago

CREATIVE AGENCIES: PITCHES, FELLOWSHIP AND ADVERTISING IN THE TIMES OF COVID-19
2 days ago

DIGITAL: THE LESSER BRUNT OF AD SPEND CUTS
2 days ago

OTT PLATFORMS: ALL OUT TO WOO THE AUDIENCE
2 days ago

PR WILL DO BETTER THAN MOST OTHER MARCOM DISCIPLINES: MADAN BAHAL, ADFACTORS PR
2 days ago