Parixit Bhattacharyya of TBWA Mumbai and Abhinay Patil of Medulla Communications, along with Kanchana TK of the Organization of Pharmaceutical Producers of India, spoke at the festival

A talk by Parixit Bhattacharyya, Managing Partner - Creative, TBWA Mumbai, on the back-story of TBWA’s campaign Blink To Speak, that won a Grand Prix for Good (Health) in 2018 and another hosted by Abhinay Patil, Creative Director – Art, Medulla Communications together with Kanchana TK, Director General, Organization of Pharmaceutical Producers of India, on influencing public perception and government policy-making for pharmaceuticals through a book, put the spotlight on Health on Day 1 of the Cannes Lions International Festival of Creativity, 2019. 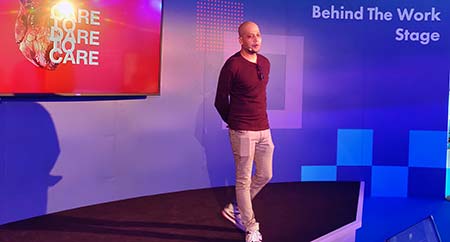 Parixit Bhattacharyya’s talk titled ‘Care To Dare to Care’ dwelt on TBWA’s campaign Blink To Speak, that made possible the simple act of communication for patients with a paralysed body but alert mind through 50 eye movements. “Blink to Speak emphasizes on working with subjects that we deeply care about because it makes us brave and lets us do things we won’t otherwise. It reveals our learnings from creating the world’s first eye language. It traces the journey of birthing BTS, right from empathy germinating it to finding a village to adopt and raise it and the importance of identifying constraints to create a truly out-of-the-box solution that’s scalable and universally applicable,” Bhattacharyya said.

The talk by Abhinay Patil and Kanchana TK titled ‘Do you have the B***s to Change Policy?' - about a book that humanized the dry rhetoric of pharma research and government policy-making - was innovatively introduced with the help of origami and making people wear masks and take them off to prove a point on trust.

“We have actually tried to bring science to life in a very creative fashion. The idea was to develop a creative campaign that brought to the fore science, scientists and their research,” said Kanchana TK, adding that the book actually influenced public perception and government policy-making for pharmaceuticals. Pharma has always been associated in India with the greedy corporate and not the tireless researcher, and the endeavour of the book is to make pharma a hero and undo that.