The age of Indian managers has arrived: Sanjiv Mehta

Sanjiv Mehta, Chairman and Managing Director, Hindustan Unilever Limited, applauded the unique traits that make Indian managers successful across the world, while recalling his own experiences as a global ‘Made in India’ manager at the launch of the book ‘The Made in India Manager’ co-authored by R. Gopalakrishnan, Corporate Advisor, The Mindworks (Former Director, Tata Sons) and Dr Ranjan Banerjee, Dean, SP Jain Institute of Management and Research (SPJIMR) at the Indian Merchants Chamber in Mumbai on Thursday.

Talking of his association with R Gopalakrishnan, Mehta, the Chief Guest at the event, said, “My relationship with Gopal goes back 26 years when I joined Unilever Arabia after Unilever had come to Arabia, and Gopal was the first Chairman. We never used the word then, but it was virtually like a start-up because we were entering new categories, setting up new manufacturing facilities, getting into new distribution arrangements. Gopal left an incredible mark on the sands of Arabia, and since then, I have been a big fan of Gopal,” Mehta said.

“I found the book ‘The Made in India Manager’ very fascinating. The authors have talked about the secret sauce and competency in the English language as a strength of Indian managers. So, I am going to embellish the ‘secret sauce’ with my experiences and what has made Indian managers do well,” Mehta said, going on to recall stories from his career, like working in a global environment as chairman of Unilever North Africa and the Middle East, with managers of 37 different nationalities. “There, I could bond easily because of the experience of living in India, because I had already dealt with different religions, castes, and languages,” he explained.

Observing that India is a functional democracy, but a chaotic country, he said, “A chaotic country enables you to live with ambiguity. And that becomes our core strength. Now, when you have a combination of a culturally very diverse country and a chaotic environment, it gives you unique experiences. I would call it the ‘crucible moments.’”

Mehta spoke of one of his ‘crucible moments’ – that of being a young manager at Union Carbide suddenly air-dropped to Bhopal to be a part of the crisis management team after the Bhopal Gas Tragedy. “For a year-and-a-half, I worked at Bhopal, navigating the Central Government, the State Government, the CBI. That was baptism by fire. As a 24-year-old I was a flunkey in the team, but that experience is going to hold me in good stead, for any crisis that I might face anytime in the world. So be it the Arab Springs or Gulf War crisis that I faced later in my career, my crucible moments helped me out.” 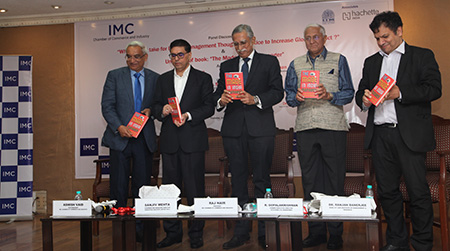 Another thing Mehta pointed out in favour of Indian managers is the culture of family bonding in India that reflects at the workplace. “Globally, everyone has realized the importance of emotional quotient. Managers and staff in India are emotionally much more connected to the organization, there is also a much stronger connect between the manager and the subordinate. We are very open about reaching out to individuals which a stiff upper lip manager will find difficult to do,” he said. “The ethos of management in the US, for instance, is based on the US military. That is the reason why the science of management has command and control, whereas in India you have a form of flexi style.”

The other trait of Indian managers that Mehta spoke of is humility. “In the book, Gopal and Dr. Banerjee have given examples of Sundar Pichai and Satya Nadella, but can you think of an arrogant person like Steve Balmer ever rolling back Microsoft’s foray into mobile the way Satya Nadella has done? I would really doubt it. And when you lace humility with ambition, then you are talking about a very potent force. That’s what makes an Indian manager hugely successful,” Mehta said. “I firmly believe that the age of Indian managers has arrived. In a subtle way, Indian managers are spreading across the world; I see the impact of it being recognized, and studied in a far more granular fashion than ever before.”

Addressing the gathering, R. Gopalakrishnan said, “India has always exported ideas; China has always exported things. There is a fundamental difference. If we are ambitious about our ideas and modest at the same time, though it is a difficult proposition to be both ambitious and modest, we can advance these ideas and we may feel good and optimistic about them… and we can collaborate and put together a body of ideas, and try to unlock the ideas in a holistic way.” At the event, Dr. Banerjee spoke about the role of family in shaping Indian managers – 80% in India say they have formative role models in the family, while the corresponding percentage among global leaders is 20-30%. “You have people who believed in you before you believed in yourself. We all need to get to the point where we develop the self-belief where our self-worth is not too dependent on what other people say about us. In leadership, it’s far more important to be respected than to be liked,” he said, adding that the elements of inclusion, adaptation, and competition experienced in Indian society come together as ‘emergence’ in the manager.

The IMC Chamber of Commerce and Industry in association with the IIM Ahmedabad Alumni Association - Mumbai and publishers Hachette India also organized a power panel discussion on ‘What does it take for Indian management thought/practice to increase global impact?’ in which the participants were Harish Bhat, Brand Custodian, Tata Sons Ltd., Raj Nair, President, IMC Chamber of Commerce and Industry and Prakash Iyer, Author, Speaker and Coach, along with the book’s authors.

Hyundai Motor India reimagines an India of tomorrow
15 hours ago

marketing Cord-cutting in India: Lot of hype, little in reality
16 hours ago