:  Summer of Fun and Excitement with Nickelodeon

Exciting programming line-up, giveaways, trip to US, film festival...all this and more in store for kids this summer from Nickelodeon

This summer, kids’ entertainment franchise Nickelodeon has a host of entertainment programming spread of new movies and new episodes starring popular Nicktoons. The summer special programming line-up includes: -
• All new episodes of Motu Patlu on Nick and Shiva and Pakdam Pakdai on Sonic.
• New series of Power Rangers Ninja Steel on Nick and all new season of Masha and the Bear, Team Umizoomi, Shimmer and Shine and The Blaze and the Monster Machine on Nick Jr
• “Shiva and The Lost tribe” will premiere on 3 June followed by the movie on Motu Patlu with “Motu Patlu – The Dinosaurs Invasion.”
Speaking about the high decibel summer engagement plan at Nickelodeon, Nina Elavia Jaipuria, Business Head, Kids Entertainment Cluster at Viacom18, said, “Kids are the center of Nickelodeon’s universe and our constant endeavor is to create money can’t buy experiences for them. It is this intent coupled with our desire to innovate that has made us favorites amongst kids and established our thought leadership in the category. We will continue to curate engagement and initiatives that are pioneering, immersive and provide an unmatched entertainment experience for kids.”
Nickelodeon’s high decibel summer campaign also gives lucky winners a chance to chill with their family at the Nickelodeon Universe in Minnesota, USA. All kids need to do to win the ticket to USA is watch Nickelodeon Monday to Friday from 6.30pm – 7.30pm and answer some fun questions.
The summer fun extends to Sonic with kids getting the chance to be part of the “SHIVA Gizmo Gang Contest” - Powered by V Mart. Kids need to watch SONIC Monday-Friday from 5.30pm – 6.30pm and answer some questions. Up for grabs will be Segways and VR Headsets.
Kids will also get to immerse themselves into the Nickelodeon world at the nearest Inox Theatre. The ‘Nickelodeon Children’s Film Festival’ will start on 26 May, every Saturday and Sunday across 21 cities in India like Mumbai, Delhi, Pune, Bangalore, Lucknow, Jaipur etc. which will screen Nickelodeon movies like Motu Patlu City of Gold, Pakdam Pakdai in Egypt, The Secret World of Vedas City, to name a few. Kids with parents in tow can pick up Motu Patlu combo treats while they enjoy the animated adventure movies of Motu Patlu, Shiva and Pakdam Pakdai. 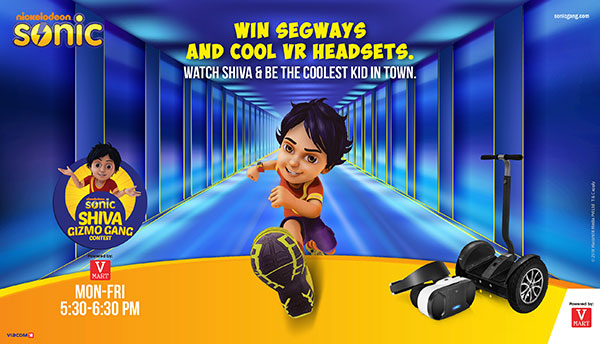 Adding scale to the campaigns, Nickelodeon and Sonic will engage with kids across the country with a high decibel integrated marketing campaign spanning cross channel TV promotions, print communication in leading dailies, on-ground activations, digital and strategic alliances. Activations at high footfall malls like High Street Phoenix, Oberoi Mall, R Mall in Mumbai and Ambience Mall in Delhi, and brand presence at relevant touchpoints like Funcity gaming arcade and Central mall will increase the engagement with kids in metros and urban cities. Taking the engagement deeper into the country is a month-long van activation going across 30 cities and building affinity in the tier2 and tier3 towns.
The campaign will also see a dedicated microsite for the kids to submit their answers, interactive posts on social media calling for entries along with an interactive App serving as another gateway for contest entries.