However, industry sources say that DD is primarily a Hindi news channel and runs English language content only for a few hours

Doordarshan (DD) News channel is ranked first in the English genre and 12th in the Hindi genre, Prasar Bharati has informed the Ministry of Information and Broadcasting (MIB).

The public broadcaster has sourced the data to Broadcast Audience Research Council (BARC). Prasar Bharati claimed in the Lok Sabha that on an all-India basis (WK-8 to WK-11), DD News garnered the leadership position in the English news genre with 31 GVL (NCCS 22+AB Male). Republic TV was at the second position with 8 GVL and CNBC TV18 on the third spot with 7 GVL, it claimed. In the Hindi genre (NCCS 15+), DD News stands at the 12th position with 128 GVL.

In the annexure submitted in the House, Prasar Bharati has also mentioned that DD News strives to deliver factual and balanced news and is recognized for its credibility as a public broadcaster. It cannot be compared with private news channels which have a commercial orientation.

While Prasar Bharati claims that DD is the leader in the English genre, the channel, interestingly, is primarily a Hindi news channel which runs English language content only for a few hours.

A highly placed source in the broadcast space said, “DD News falls in the Hindi news channel category. It runs a couple of bulletins in English language for four-five hours. Hence, comparing DD News with other channels in the space which air English news throughout the day is completely unfair.”

As per the BARC data available on its site, Republic TV, since its launch, has been on the top position in the genre. Times Now, meanwhile, has maintained its second slot. Some of the other channels that feature among the top 10 names are India Today Television, CNN News18, Wion and NDTV 24x7.


Here is the table submitted by Prasar Bharti in the Lok Sabha: 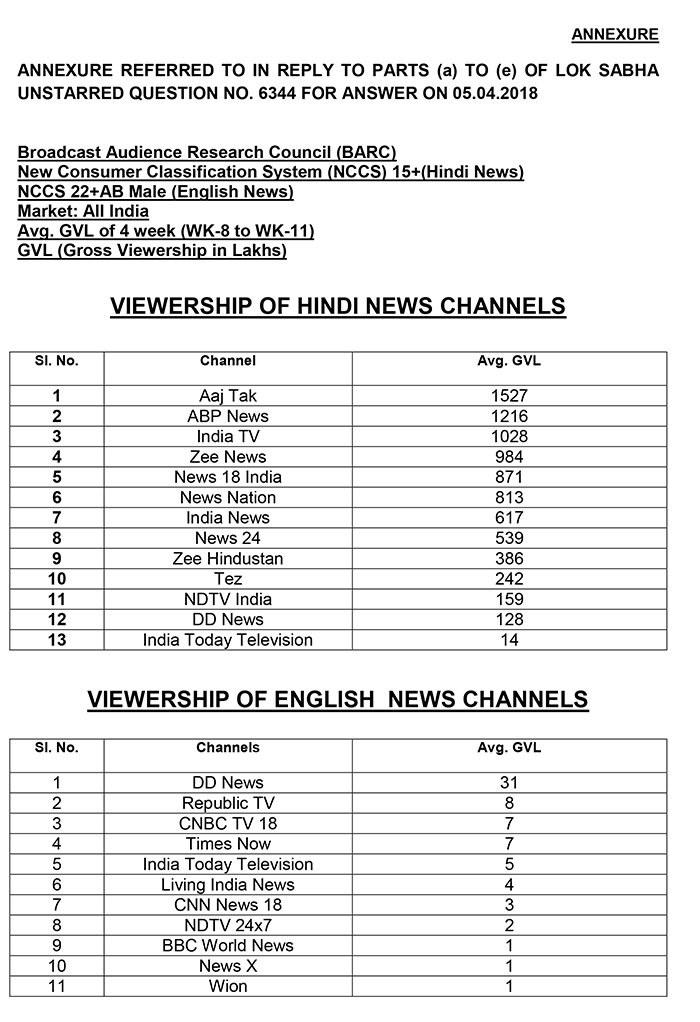 Will the show go on? Broadcasters stare at disruption in GEC programming due to shoot ban
2 days ago

media-tv Will the show go on? Broadcasters stare at disruption in GEC programming due to shoot ban
2 days ago