A focussed and well-executed circulation expansion strategy has delivered excellent growth: of almost 18% in 9 months from around 51 lakh copies in June end 2017 to around 59.6 lakh copies as on March end 2018, an increase of around 9 lakh copies, majorly in markets of Bihar, Rajasthan and Gujarat.

Over the past five years [from FY 2011-12 to FY 2016-17] Dainik Bhaskar has delivered reporting 15% CAGR growth driven by yield in core legacy markets – much above the industry reported numbers.

Circulation strategy was complimented by strong editorial and product enrichment efforts along with unique and impactful reader engagement initiatives.

• Further, excluding, impact of circulation expansion related one off expenditure, EBIDTA growth would have been in mid single digit.

• Board has considered and recommended final dividend of 10% on Rs. 10/- face value per share. Further, Board continues to evaluate different efficient avenues for distribution of Income.

• Circulation Revenue grew by 7% YOY to Rs. 5145 million from Rs. 4814 million, largely an outcome of volume growth driven by circulation expansion strategy and without any reduction in cover prices.

Circulation expansion strategy has delivered excellent growth of almost 18% in 9 months from around 51 lakh copies in June end 2017 to around 59.6 Lakh copies in March end 2018, an increase of almost 9 lakh copies.

Continuous strong emphasis on product strengthening: editorial team committed to create an unparalleled product based on two primary aims – 1). Ensuring that Dainik Bhaskar continues to be of high relevance to readers and 2). Remain an integral aspect of the readers’ lives.

Several strategic initiatives launched to orient editorial team in this direction and complement the company’s circulation expansion efforts across all regions.

Commenting on the performance for Q4 & FY 2017-18, Mr. Sudhir Agarwal, Managing Director, DB Corp Ltd said, “Our performance in the fourth quarter has reflected a culmination of all efforts, we have been under taking over the last one year, in implementing editorial and circulation expansion strategies. As evident, both have played out their complimentary roles and we have reported significant circulationled growth. Our focus markets remains the same in Gujarat, Bihar, and Rajasthan and we are working hard to further increase our circulation number in markets, we already enjoy a strong dominance, including MP , CG, Haryana and Chandigarh”.

He continued, “A key aspect of our circulation strategies have been the strong reader engagement initiatives that helped in expanding our markets and attracting new readers. Through these efforts, we have been successful in also attracting the right profile of audiences in NCCS A and B categories also benefiting our advertisers. Our stringent business processes are ensuring that all our resources are prudently utilised, and through capabilities in technology, we have ensured that every team’s efficiency and productivity is at their best. The non-print businesses are also well synergised and strongly complement the overall package to advertisers and brands. At a broader level, all fundamental business growth drivers are in place which positions us well to capitalise on emerging industry opportunities. The positive outlook on India reflected by global institutions is providing a strong impetus to the positive sentiment on-ground that signals a better new fiscal ahead.” 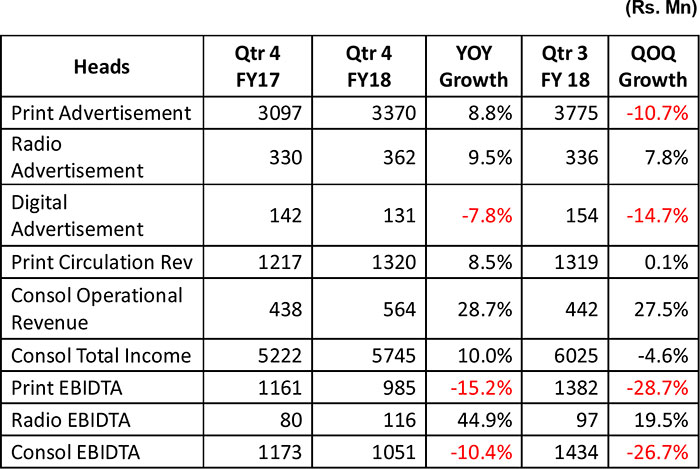