Users can also book their tickets offline from the BookMyShow Box Office, set up at various local centers within the host cities

Tickets for the first season of IPKL will be available on the BookMyShow app and website. Users can also book their tickets offline from the BookMyShow Box Office, set up at various local centers within the host cities. With this, fans across the board can experience the thrill of a live game with the new revolution in Kabaddi.

Speaking about the partnership and on behalf of the Host Broadcaster DSPORT, R.C Venkateish, CEO Lex Sportel Vision Pvt. Ltd. India said “We are happy to have BookMyShow onboard as IPKL’s official ticketing partner and this is indeed a great step towards making the IPKL more accessible. Through its vast experience, BookMyShow along with selling tickets online will also set up various kiosks at local centers to ensure easy availability of tickets for the inaugural edition. Keeping in mind the growing popularity of the sport and the way it cuts across all social strata we have ensured that the IPKL tickets are priced reasonably enough to allow everyone to come and enjoy the evening along with friends and family.”

The winning team of IPKL season 1 will walk away with a winner’s cheque of INR 1.25 CR while the runners up would go back with a hefty sum of INR 75 Lakhs. The third-placed team would earn a total of INR 50 Lakhs while the fourth place would get a sum of INR 25 Lakhs. What sets apart the Indo International Premier League is its remuneration strategy where apart from the salaries and prize money, 20% of the revenue from the league would be equally distributed amongst all the players. This marks an important development in India’s sporting league history, as NKF becomes the only federation to take this step after BCCI.

“Kabaddi in India has established itself as a truly popular sport today, giving consumers a great gladiatorial experience. At BookMyShow we have been fortunate to see how the consumer has responded to the sport and evolved over the years. Using these nuanced insights and our extensive experience in driving value for sporting properties via ticketing, we are glad to join hands with IPKL as their official ticketing partners. The sports landscape in India is undergoing a transformation and IPKL’s entry is a welcome addition to that. We are certain, that while fans turn out to attend the matches in huge numbers to enjoy this live entertainment experience, their attendance and consequent revenues from ticket sales will augur well for the economies of the sport. We look forward to a long, strategic and fruitful association with IPKL,” said Albert Almeida, COO - Live Entertainment, BookMyShow.

Ravi Kiran, Director, IPKL said, “BookMyShow is a renowned and trusted name in entertainment landscape and we are glad to have the best on board with us. Ticketing is a prime resource for the revenues and given the sport's popularity I am sure we are going to see a packed stadium for each of the three legs of IPKL in its inaugural season.”

The IPKL in its inaugural season will see a total of 44 matches being played between eight franchisees viz; Bangalore Rhinos, Chennai Challengers, Diler Delhi, Telugu Bulls, Pune Pride, Haryana Heroes, Mumbai CheRaje and Pondicherry Predators. The first season will see these eight franchisees fight it out for the top honours across Pune (May 13-21) at the Balewadi Stadium; Mysore (May 24-29) at the ChamundiVihar Stadium and Bengaluru for the Finalleg (1-4 June) at the famous Kanteerava Stadium. The inaugural season will see a total of 160 players including 16 foreigners make their way to the eight teams with a heavy emphasis on showcasing local talent for each franchisee. All the Indian players were selected post rigorous selection trials conducted across the country over a period of four months. Each team will comprise of marquee players and will include five raiders, seven defenders and three all-rounders besides two foreign signings. One coach and the physio will also be assigned to the teams.

The first edition of the Indo International Premier Kabaddi League will be broadcast LIVE on DSPORT (English), MTV & MTV HD+ (Hindi) as well as several other regional networks. About DSPORT DSPORT is a premium sports TV channel launched by Discovery Communications India specifically for the Indian subcontinent. The channel is focused on bringing the most live sports content, over 4000 hours, from around the world to audiences in India. DSPORT’s wide portfolio of live sports content includes the best of Wrestling, Cricket, football, cycling, golf, Tennis, motorsports, and other premium sports from around the world. From the Tour de France to the Laver Cup, the prestigious British Open in golf to football’s Copa America, DSPORT celebrates sporting excellence, connects audiences with the athletes and sports they love and demonstrates Discovery’s commitment to super-serve passionate sports fans across the sub-continent 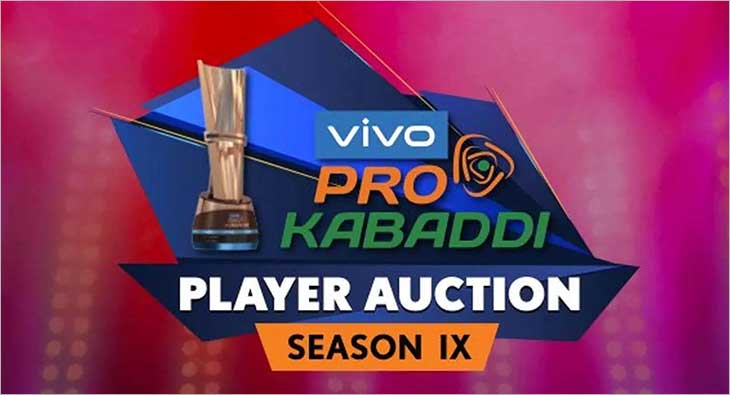