Manorama News has rolled out its new brand campaign titled “Chodikkanum Parayanum” which roughly translates to, “to question and to expose”, a statement that positions the channel as a socially conscious NEWS brand. The campaign was released on 15th January 2019 through print and digital campaigns along with a brand film on TV. The launch manifesto ad carried a text wrap innovation which stood out from the clutter.

The channel has also launched a microsite: www.manoramanews.com/chodikkanumparayanum which is essentially a forum where Manorama News invites the general public to share newsworthy subjects they want to highlight. The visual motif of the campaign is a raised hand with a pointed finger, which is dominant and assertive. It places the authority (or in some cases, the public themselves) as culpable for some of the evils that are prominent in society.

Chodikkanum Parayanum, through its follow-up creatives, takes on issues that affect the general public as one and holds the relevant people responsible. It demands changes on a large scale and exposes cracks in the general functioning of the administration and society. 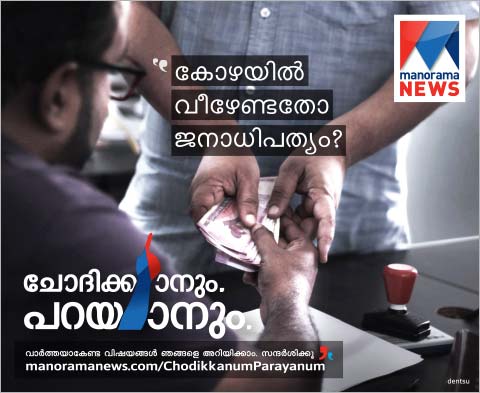 The campaign makes the brand stand out from the crowd and has already generated a very large footprint on social media. The campaign will help connect with all strata of society, and elevates Manorama News as a channel with a purpose.