Growth and evolution of regional PR firms & the way ahead

With regional markets emerging as the focal point for brands and marketers for some time now, there is a huge base of aspirational consumers that every marketer wants to tap into. While the metros and bigger cities have a well-oiled public relations and media network to keep consumers informed, the smaller regional markets pose several challenges for the public relations industry.

exchange4media takes a look at some of the roadblocks and opportunities that lie ahead for the regional PR industry.

One of the major obstacles, one that is agreed upon by most regional PR heads, is the lack of awareness - be it regarding organised content and merit-based PR or what PR can deliver as an independent or standalone function. Says Shailesh Goyal, Founder Director, Simulations Public Affairs Management Services Pvt. Ltd, “Still considered an extension of advertising, occasional media coverage is seen as a birth right by the advertising clients. The other challenge is that potential clients look at the costs involved vis-à-vis ROI and in most cases, they want immediate results without realising the value PR consultancies bring to the table in the long term. It is challenging to convince them that image building or brand development takes time and focused efforts. However, we are seeing some businesses even in small towns becoming increasingly aware of the potential of PR and have started considering engagement at moderate fee levels.”

That being said, while “a regional PR agency's geographical dominance cannot be disputed, the scale was always questionable” says Sheela Panicker, Founder, enRight PR. “But the challenge, to a large extent, has been solved by the digital world, and digitization, access to media, and influencers, through social media channels is surpassing the challenges,” she added.

According to Mansirat Bajwa, Brand Consultant, Fuzion PR, most of the messaging is focused on audiences in the metros or other big cities. In smaller towns, where the market is growing, it is essential for brands to suitably modify their messaging. “While companies/brands think global, they need to act locally to deliver the right message. Every geography, especially the smaller markets, has its own way of functioning, so the messaging needs to be local in nature,” she points out.

After having operated in both metros and in the regional space, Supriyo Gupta, owner of Torque Communications, is of the opinion that the biggest challenge in small towns or Tier 2 / Tier 3 cities is the fragmentation of the media. In bigger cities, despite a plethora of publications, there is a relatively small number of dominant publications. In Tier 2/ 3 cities, the small (less than 25,000 circulations) and medium (up to 75,000) publications make up for a fairly sizable chunk of the circulation. These are often local and even hyper-local but carry influence by sheer localisation of their coverage.”

Richy D Alexander, Founder and CEO, Davidson PR & Communications, however, presents a completely contrasting opinion. More than the challenges, he sees a huge potential for regional PR agencies in India. He believes, “Though the media universe is yet to evolve in Tier 2 /Tier 3 cities as compared to the Tier 1 cities, the scope for improvisation is high in regional markets. With the evolution of digital PR and regional markets being important for brands, the future looks bright for regional PR in Tier 2 / tier 3 cities.”

There is no denying that it is critical to communicate with customers in their own language. Customers respond better when messages are delivered in their native language. Brands will be able to obtain a higher percentage of engagement and answers if they use local language in all modes of communication.

Agrees Bajwa, “If you need to win over your customers, then vernacular content is the mantra for success. Vernacular gives a guaranteed level of engagement, respect, and understanding of the targeted customer. As far as language content goes, we clearly see that it is on the rise and will keep forging ahead, at a rapid pace. More than 75 per cent of new internet users over the next five years are projected to be Indian language users. According to a recent Google-KPMG report, India has 234 million Indian language users online while only 175 million are English language users.”

The strength of regional PR firms has always been localisation, content and connecting to influencers in regional ways. It is their strong presence and deeper connection with regional media and influencers that help them thrive even today. Panicker explains, “Many vernacular media have extensive international readers - over 32 million Indians stay abroad. They form one of the world's largest overseas diaspora and want to have that emotional connection by consuming content in their mother tongue.”

Gupta is of the opinion that the reassertion of the local vernacular at a time when regional language content harnesses the power of digital distribution has accelerated the sheer number of people participating in media conversations. “The faster brands ride not just the local vernacular and the local idiom but also the local moment, the more they are likely to build trust and comfort,” he adds.

The world is one today and there is nothing like a regional PR landscape, thanks to digitisation. One can reach, connect, communicate to people in any part of the world today with a click of a button and using social media tools, says Panicker.

The regional PR landscape has changed a lot in recent years and it will change at an even faster pace in the coming few years. Regional PR agencies have emerged as integrated communications firms by offering services beyond just press relations.

This trend is likely to gain more ground going ahead, says Goyal. “I also believe that regional PR as an IC tool is likely to grow at a faster rate than the overall PR industry in the years to come. The future incremental growth of the industry lies in regional markets and not the national markets. A company from a smaller city or town or a start-up is unlikely to be able to afford the services of national PR agencies, and go to regional agencies, many of which can offer services nationally through their networks and associates. Regional PR agencies will have to play an important role in facilitating the industry’s growth. While print will continue to be important as far as regional PR is concerned, we will see a greater shift towards digital albeit at a slower pace than we have seen nationally and globally in the past few years.”

The content in this section is curated by the PR and Communications team. For any feedback kindly write to karan.bhatia@exchanhge4media.com.

The only shortcut is hard work: Vineet Handa, Kaizen Founder & CEO
14 hours ago

Success is the product of daily habits: Nitin Thakur, OYO
17 hours ago 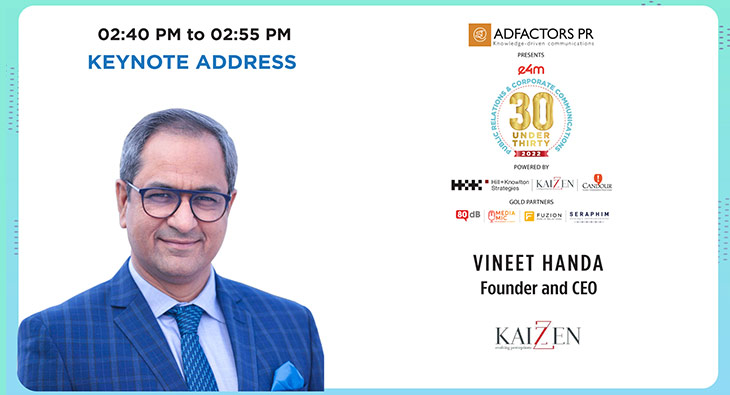 pr-and-corporate-communication Success is the product of daily habits: Nitin Thakur, OYO
17 hours ago